London: A record number of migrants have crossed the English Channel from France after European courts stopped the British government from going ahead with its plan to deport asylum seekers who arrived by boat to Rwanda.

The Ministry of Defence said the number of people who arrived in boats in a single day was 1295. They travelled aboard 27 separate vessels. 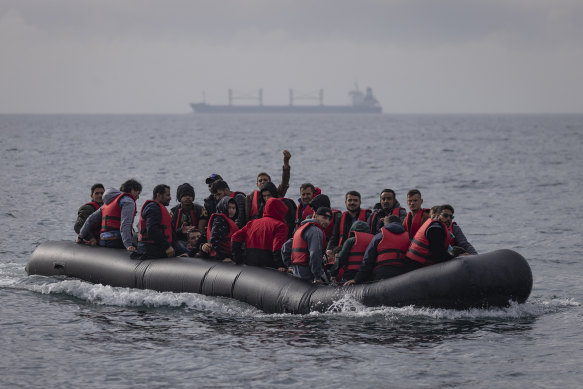 An inflatable craft carrying migrants crosses the shipping lane in the English Channel this month.Credit:Getty

This is the highest single-day tally of arrivals since the UK began keeping records in 2018 and saw the total number of arrivals double to 22,670 for the year so far, compared to the 12,500 who had made the journey this time last year.

They were taken to Dover.

The increase in arrivals underlines the failure of the British government’s threat to send unwanted migrants to Rwanda for processing and potential resettlement to deter migrants or the people smuggler networks.

The smugglers have adopted a practice of swarming the channel with numerous boats simultaneously to overwhelm authorities.

And it is likely to see current Home Secretary Priti Patel banished from the job when Tory party members decide their new leader on September 5.

She is one of a number of Home Secretaries who have failed to stop the flow of boats. The government’s inability to resolve the issue has led to rancour on the backbench amongst MPs, particularly in former Labour seats, who say their constituents do not like seeing billions spent on accommodating asylum seekers in hotels.

The government’s plan to send asylum seekers to Rwanda has been put on ice after the European Court of Human Rights (separate to the European Union which Britain voted to leave in 2016) thwarted the idea and issued an injunction to stop the first planned deportation.

Tom Hunt, who represents one of the so-called “red wall” seats of Ipswich told The Sydney Morning Herald and The Age that drastic measures were required.

“These record numbers of arrivals shows why we need to have leaving the European Court of Human Rights on the table,” he said.

Both candidates, Liz Truss and Rishi Sunak have thrown their full support behind the Rwanda plan, even though it has been held up in the courts.

Former Prime Minister Tony Abbott, visiting London last week, told the former UKIP Leader, now right-leaning GB News presenter Nigel Farage, that Britain needs to say that the “way is closed” in order to stop the boats. Abbott pointed to his own success as Australian prime minister in stopping the flow of boats from Indonesia.

This was largely achieved by turning back boats, which is a tactic that is unavailable to the British.

The English Channel has no international waters so for the British to push back boats, they would need French agreement, something the French have so far been unwilling to do.

A report by the Commons Home Affairs Select Committee has already urged the government against trying to mimic Australia’s hard-line measures, saying they won’t work for the UK.

It instead urged an intelligence-led approach, as well as establishing asylum processing centres on the French side of the Channel to disincentivise people from getting into small boats.