The North Atlantic Treaty Organisation, now marking its 70th birthday, has been credited with keeping European peace since the Second World War. But when Britain finally leaves the EU, 80 per cent of its funding will come from outside the union. Anders Fogh Rasmussen, 66, the former Nato head and one-time PM of Denmark, said increasing talk of an EU army is putting pressure on Nato. But he said that army couldn’t function without Nato support.

Last week, German justice minister Katarina Barley, 50, called for the force to be led by the EU parliament, while EU federalist Guy Verhofstadt, 65, marked Thursday’s anniversary by stating: “It is vital we strengthen Nato by building its European pillar, based on a European defence community and a European Army.”

Mr Rasmussen said: “I welcome a strengthened European military co-operation if it means a real increase in defence investment and if it doesn’t duplicate what Nato already does.

“But we have to be clear. After Brexit, 80 per cent of all defence investment within Nato will take place outside the EU. Any EU army will be a paper tiger.” It comes at an uncertain time for world stability. On Thursday, Turkey, a Nato member, confirmed its controversial deal to buy a Russian missile system.

On the same day, RAF Typhoons were scrambled when Russian blackjack bombers flew close to British airspace to observe a large-scale military exercise in Scotland. 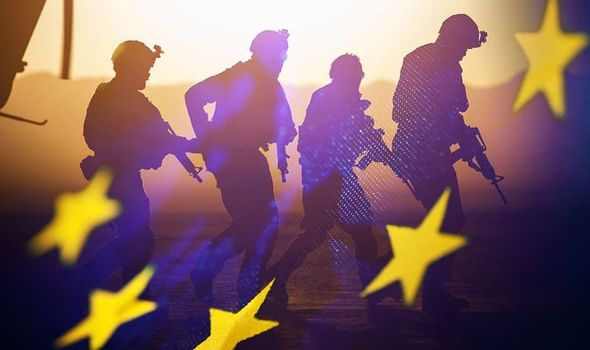 Mr Rasmussen said rows over spending – and the attitude of President Trump – were causing difficulties. “Militarily, Nato is strong today and members, including the US, have deployed more troops to eastern states to strengthen our territorial defence.

“The main reason for this is not Donald Trump but Vladimir Putin. We had thought Russia were strategic partners. Now we know they’re strategic adversaries. That changes the whole equation.”

He said Trump’s ambivalence over Article 5, the mutual protection clause that an attack on one is an attack on all, is a problem.

“When a US president publicly raises doubts over Article 5, he tempts Putin and others to test the revolve of Nato.”

Last month it emerged that Germany would not be increasing its defence spending, despite its pledge in 2014.

Meanwhile, it is persisting with the Nordstream 2 pipeline, which would increase its energy reliance on Russia. Germany’s foreign ministry rejected claims that it is not fully committed to Nato but recent US criticism has seen relations sour.

“We’re finding a lot of doors more difficult to open right now,” said one US diplomat. “Things haven’t been as bad as this since the Second World War.”

Britain accounts for a quarter of European defence spending by Nato’s 23 EU members and Mr Rasmussen said: “Brexit can lead to a strengthening of Nato because it will important for the UK to demonstrate its commitment.”

Ankara’s confirmation that the Russian missile “deal is done” brought a rebuke from US vice president Mike Pence, who said: “Turkey must choose – does it want to remain a critical partner of the most successful military alliance in the history of the world, or does it want to risk the security of that partnership by making reckless decisions that undermine our alliance?”

But Mr Rasmussen rejected calls to kick it out. “Turning our back would simply allow Turkey to strengthen its ties with Iran and Russia.”

The former Nato secretary general is also at odds with calls to limit its expansion.

Macedonia’s impending membership will increase the Nato club to 30 members. But hardline US critics are calling to reverse promises made in 2008 to include Ukraine and Georgia, on Russia’s doorstep.

However, Mr Rasmussen said: “Each country has the right to decide their own alliance affiliations – it cannot be the Kremlin which decides the destiny of Georgia and the Ukraine.”

In a message to Mr Putin, he added: “Russia should consider why all its neighbours are so eager to join Nato to get the protection they feel they need.

“Putin has ­created a hostile environment.

“In this sense, Nato couldn’t be healthier. Countries believe in the alliance and want to join and Nato will keep its door open.”

This group is trying to stop Trump’s reelection by asking people to pledge a few cents to Democratic groups every time the president tweets. It’s raised $2.7 million since June.