While the UK suffers a week-long heatwave, Spain, France and Germany have also seen record breaking spells of heat. Highs of 42C are set to come over the weekend, as a pressure system continues to push high temperatures into Europe.

The Azores High is a large subtropical semi-permanent centre of high atmospheric pressure typically found south of the Azores archipelago in the Atlantic Ocean.

Formed by dry air descending in the subtropics, the Azores High, which usually sits off Spain, has grown larger and is being pushed northwards.

A Met Office spokesperson told MailOnline: “Areas of high and low pressures do move around the globe, so the Azores High does occasionally extend across the UK throughout the year.

“The high usually doesn’t stay for too long but on this occasion it has remained close by throughout the summer.” 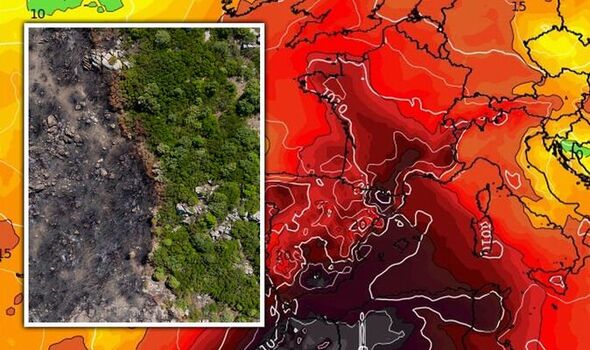 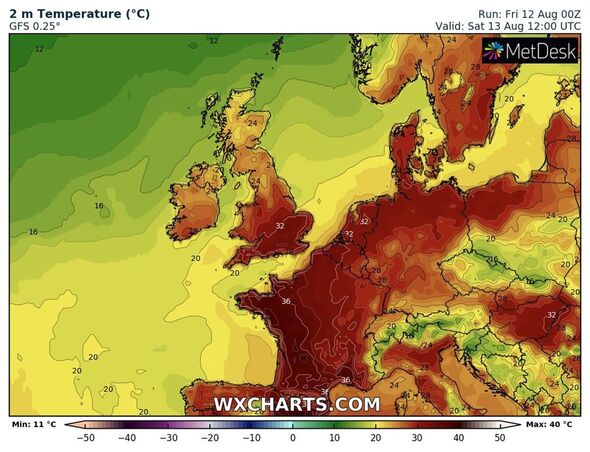 According to WXCharts, 6pm on Saturday sees almost all of France in extreme heat.

This time sees conditions between 34C and 38C all along the west of the country, with the rest of mainland France seeing between 30C and 34C.

The south west of France is currently suffering a 26 mile (40km) active fire-front, with hundreds of firefighters from across the EU tackling the blaze.

Conditions are set to remain dry and hot, with southwestern French officials warning there is a risk of yet more fires breaking out.

Senior Gironde official Ronan Leaustic said the risk of new fires is “very severe” considering the weather conditions, adding: “The day is likely to be complicated since temperatures continue to increase and humidity continues to drop, so we remain vigilant and mobilised.”

According to Meteo France, the country’s heatwave, its third this year, is set to ebb on Saturday and end on Sunday with storms. 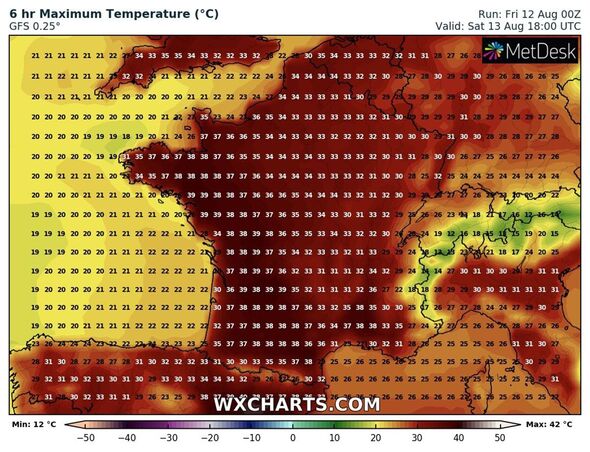 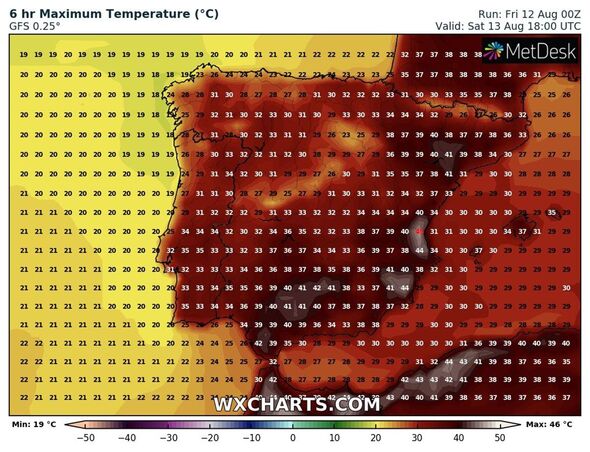 Spain is set to see another spike in temperatures over the weekend, with the highest temperatures set for 6pm.

At this time, Valencia is set to burn in 45C heat, while Seville also bakes in 42C heat according to WXCharts’ maximum temperature forecasts.

Portugal, Madrid and north Spain sees similar conditions to Britain, with between 30C and 35C conditions.

Aemet spokesperson Rubén del Campo said the weekend is “the final fireworks” in this prolonged episode of “very high temperatures that, without rest, have lasted since the beginning of July”.

Mr del Campo added that “as of Sunday we expect a change in the prevailing atmospheric configuration in our country,” predicting a dramatic drop in temperatures “in most of the country” in the days that follow. 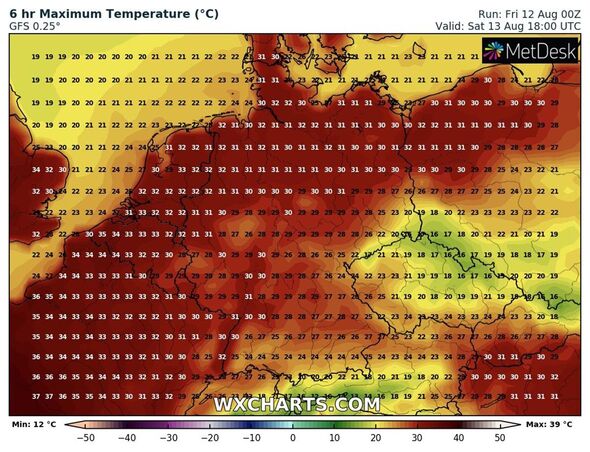 Germany sees milder conditions than France and Spain at 6pm on Saturday, but still suffers between 29C and 33C conditions along its west and north areas.

Meanwhile, Germany’s drought has seen the Rhine fall close to its lowest ever level, just centimetres behind October 2018’s 25cm.

At midday on Sunday, light rainfall is set to fall over the areas bordering the Czech Republic. 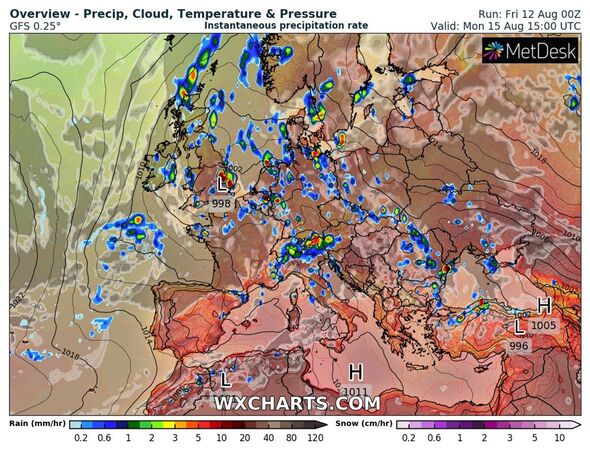 It comes as Paul Michaelwaite, Netweather.tv forecaster, warned the UK is set to see an end to heatwave conditions with thunderstorms.

He said: “The risk will start on Sunday across Northern Ireland and Scotland initially, but with a few downpours and storms possible in western parts of England and Wales later in the day.

“The threat then becomes more widespread on Monday, with a renewed push of thundery rain likely on Tuesday.

“As ever with storms, they’ll be hit and miss, with not all parts liable to catch one, but should one move through, there is going to be the possibility of it being quite spicy with torrential rain, gusting winds and frequent lightning possible.

“With the ground being so dry, run-off is going to be a factor with the ground unable to soak in much, if any, of the rain which falls. So, flash-flooding may well be a real issue.”

Hong Kong leader does not rule out reshuffle, says focus is restoring order