Frankfurt: Russia has scrapped a deadline to resume flows via a major gas supply route to Germany, deepening Europe’s difficulties in securing winter fuel, after saying it had found faults in the Nord Stream 1 pipeline during maintenance.

Nord Stream 1, which runs under the Baltic Sea, had been due to resume operating on Saturday after a three-day halt for maintenance. 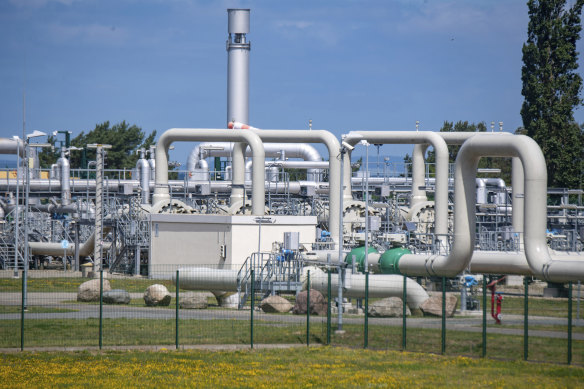 Europe is scrambling to cut its dependency on Russian gas before winter.Credit:AP

But Gazprom, the state-controlled firm with a monopoly on Russian gas exports via pipeline, said it could not safely restart deliveries until it had fixed an oil leak found in a vital turbine. It did not give a new time frame.

However, Siemens Energy, which normally services Nord Stream 1 turbines, said such a leak should not stop the pipeline from operating. It also said the Portovaya compressor station, where the leak was discovered, has other turbines for Nord Stream to keep operating.

“Such leaks do not normally affect the operation of a turbine and can be sealed on site. It is a routine procedure within the scope of maintenance work,” the company said.

Moscow has blamed sanctions, imposed by the West after Russia invaded Ukraine, for hampering routine operations and maintenance of Nord Stream 1. Brussels says this is a pretext and Russia is using gas as an economic weapon to retaliate.

“This is part of Russia’s psychological war against us,” tweeted Michael Roth, chair of the German parliamentary foreign affairs committee.

Siemens Energy said it is not currently contracted to carry out maintenance work on the line but is on standby.

European Commission chief Ursula von der Leyen said earlier that the EU should impose a price cap on Russian pipeline gas to foil what she said were President Vladimir Putin’s attempts to manipulate the market.

Russia has denied previous allegations of using gas as an economic weapon or manipulating the gas market.

Wholesale gas prices have rocketed 400 per cent since August 2021, hurting European industry and households as demand recovered from the COVID-19 pandemic and because of the Ukraine crisis.

“We see that the electricity market does not work anymore because it is massively disrupted due to Putin’s manipulations,” Von der Leyen said, adding that a gas price cap on Russian pipeline supplies could be proposed at the European level.

Former Russian President Dmitry Medvedev said Moscow would turn off supplies to Europe if Brussels imposed such a cap.

“There will simply be no Russian gas in Europe,” he wrote on the Telegram app in response to Von der Leyen.

Reduced deliveries via Nord Stream, alongside lower gas flows via Ukraine, another major route, have already left European states struggling to refill storage tanks for winter and prompted many to trigger emergency plans that could lead to energy rationing and stoking concerns about recession.

European Commission spokesman Eric Mamer wrote on Twitter that Gazprom had acted under “fallacious pretences” to shut down Nord Stream 1. “It’s also proof of Russia’s cynicism, as it prefers to flare gas instead of honouring contracts.”

Group of Seven finance ministers earlier agreed to put a price cap on Russian oil exports. Moscow said it would halt oil sales to countries imposing the cap, adding that the move would destabilise oil markets. Russia is the world’s biggest exporter of crude and fuel combined.

Germany’s network regulator said the country was more ready to cope with disruption to Russian supplies, but households and companies had to cut energy consumption.

“It’s good that Germany is now better prepared, but now it’s down to each and everyone,” Klaus Mueller, president of the Bundesnetzagentur, said on Twitter.

Kremlin spokesman Dmitry Peskov suggested earlier on Friday there could be more disruptions to deliveries via Nord Stream 1.

“It’s not the fault of Gazprom that the resources are missing. Therefore, the reliability of the entire system is at risk,” he said when asked if more outages could be expected.

EU governments have been preparing for the possibility that Russia stops deliveries completely after Gazprom first reduced flows in June and then again in July.

This week’s maintenance was announced at short notice.

Germany, which is particularly reliant on Russian supplies, has been racing to fill its storage tanks before winter. That storage is now nearly 85 per cent full, but Berlin says reaching a 95 per cent target by November 1 will be tough unless companies and households use less fuel.

The EU has exceeded its 80 per cent target for storage to be full by October 1, ready for when heating usage picks up, but that may not sustain Europe through the winter if Russia keeps the taps closed.

Some energy-intensive European companies, such as fertiliser and aluminium producers, have already cut output due to sky-high power prices, while some domestic consumers have reined in usage to save on escalating energy bills.