Neil Young's Jan. 24 announcement that he wanted his music off the streaming service Spotify because it hosts Joe Rogan's podcast, The Joe Rogan Experience, continues to have a ripple effect. After Young cited Rogan's show for "spreading false information about vaccines," other celebrities, as well as the streamer itself, have reacted, with some following Young's lead.

Here's the latest, which we'll update with new developments. 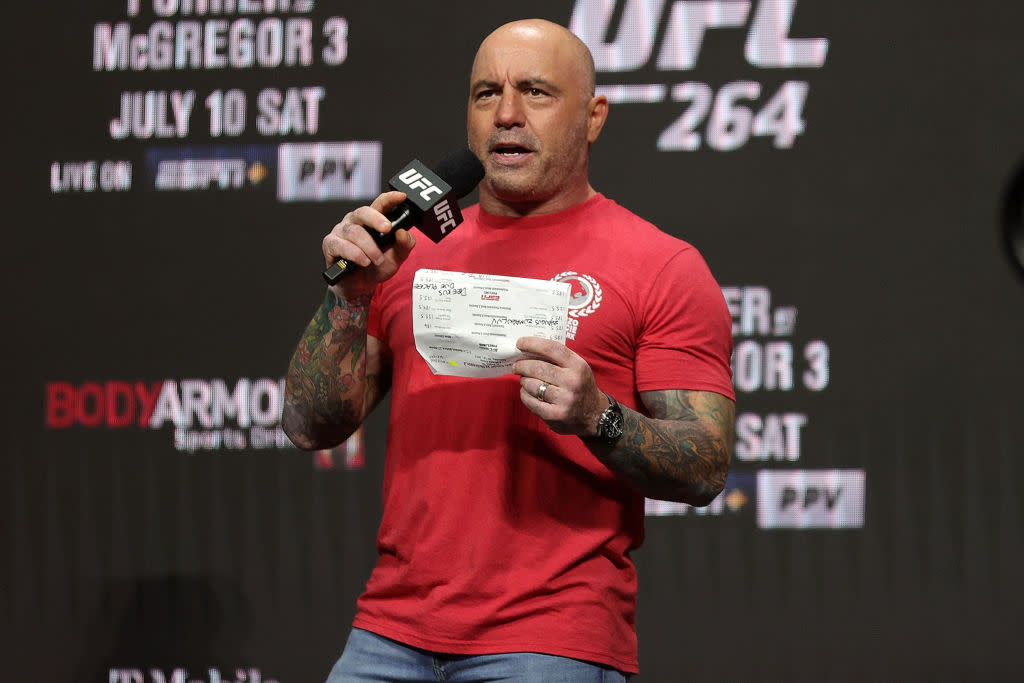 Rogan promises to 'try to balance out these more controversial viewpoints'

Rogan, who reportedly has a distribution deal with the streaming giant estimated to be worth $100 million, responded to the controversy about his popular show in a 10-minute video shared on Jan. 30.

"I'm not trying to promote misinformation," he said. "I'm not trying to be controversial. I've never tried to do anything with this podcast other than just talk to people and have interesting conversations." While he said he sometimes gets things wrong, he said he tries to correct errors. Rogan said he'd try and "balance out these more controversial viewpoints with other people's perspectives, so we can maybe find a better point of view." Still, he defended his decision to book a widely criticized guest, Dr. Robert Malone, who he said is "highly credentialed" and has an opinion "different from the mainstream narrative."

Malone, who is a COVID vaccine skeptic, was suspended from Twitter for false statements in December, and the video of his interview with Rogan that month has also been removed from YouTube.

Spotify publishes 'platform rules,' as CEO says company 'has an obligation to do more'

Also on Jan. 30, Spotify CEO Daniel Ek posted a note on the company's platform rules. "Based on the feedback over the last several weeks, it's become clear to me that we have an obligation to do more to provide balance and access to widely-accepted information from the medical and scientific communities guiding us through this unprecedented time," he wrote of the COVID-19 pandemic. "These issues are incredibly complex." Ek noted that Spotify is, among other things, working to add a content advisory to podcast episodes that discuss the virus that will point listeners to a COVID-19 information hub, which will include "easy access to data-driven facts, up-to-date information as shared by scientists, physicians, academics and public health authorities around the world, as well as links to trusted sources."

Brené Brown told fans Jan. 29 that she would "not be releasing any podcasts until further notice." While Brown, the host of Unlocking Us and Dare to Lead, didn't give a reason for the hiatus, the timing neatly lined up with the Rogan controversy. And many of her fans applauded the move in the comments, noting that she was choosing courage over comfort, which she has spoken about in the past.

I will not be releasing any podcasts until further notice. To our #UnlockingUs and #DaretoLead communities, I’m sorry and I'll let you know if and when that changes.

On the same day, musician Nils Lofgren, a member of Bruce Springsteen's E Street Band, who has played with Young, joined in asking for his music to be removed from Spotify.

Singer-songwriter Joni Mitchell was the first boldface name to do so.

The "Big Yellow Taxi" singer wrote on her website: "Irresponsible people are spreading lies that are costing people their lives. I stand in solidarity with Neil Young and the global scientific and medical communities on this issue." In addition, she shared a letter signed by hundreds of medical professionals and scientists who noted that Rogan had "repeatedly spread misleading and false claims" to his millions of listeners. They took particular issue with Malone's appearance.

Days earlier, on Jan. 24, Young posted a since-deleted letter on his website explaining that he wanted his music off the platform, as long as it continued to carry Rogan's popular podcast. "I am doing this because Spotify is spreading false information about vaccines — potentially causing death to those who believe the disinformation being spread by them," he wrote. Spotify soon obliged.