EXCLUSIVE: The north v south cost of living divide: How fish and chips are £7.70 cheaper in Newcastle than the capital, a Wetherspoon pint is £3.40 less in Middlesbrough than London – and where inflation has hit the hardest

The cost-of-living crisis widening the north-south divide has been laid bare with MailOnline research showing the dramatically different costs faced by families up and down the country.

Analysis of data collected by MailOnline reveals the regional differences in food and drinks across the country’s pub and brewery giants; with a breakfast at Wetherspoon costing £3.55 more in Leicester Square than Middlesbrough, while a pint is £2.40 cheaper in Darlington than High Holborn.

And in the wake of the energy crisis gripping the nation, MailOnline spoke to families in five of the UK’s biggest cities and found some surprising findings in their monthly expenses.

When asked how much of a pay increase people would need to maintain their cost of living, Londoners said 40 per cent, while those in the North East and North West said 36 per cent and 34 per cent respectively.

Here, MailOnline analyses the breakdown of costs from the north to the south – from fish and chips and pies, to pints, water bills, council tax and fuel. 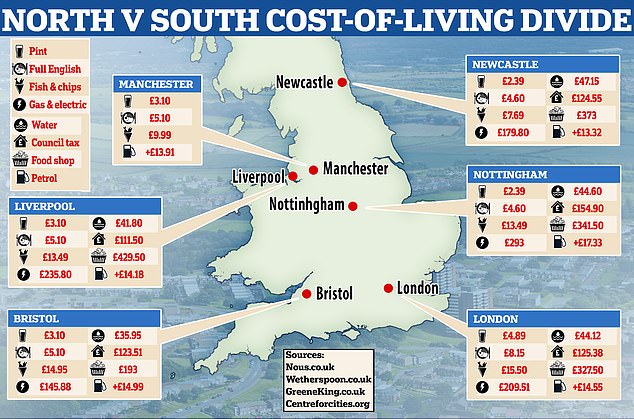 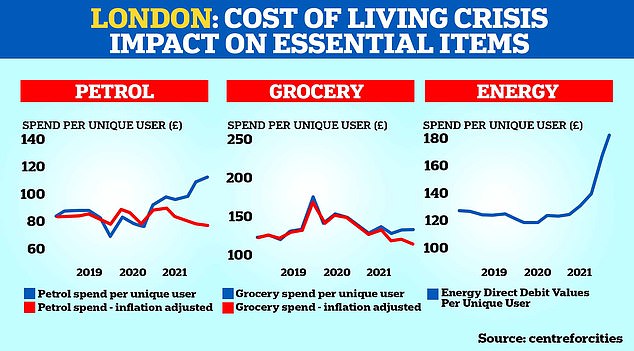 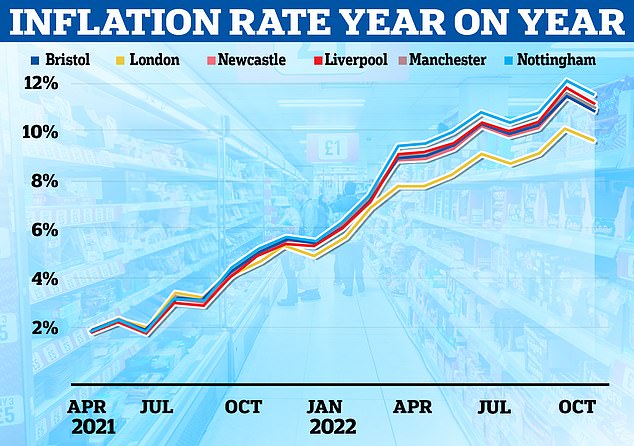 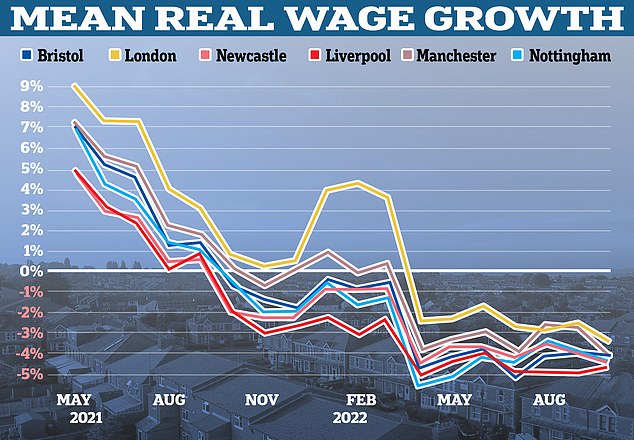 At The Moon Under Water, a Wetherspoon branch in Leicester Square, London, a pint of Stella costs a huge £6.45 and a traditional breakfast will set you back £8.15.

What will a breakfast, pint and bills cost YOU?

These figures show the average price of food, drink, and bills, across the north, south and midlands according to figures collected in December 2022.

Unsurprisingly, pubs outside of the capital sell the same products at much cheaper rates.

For instance, a pint of Stella at The Resolution in Middlesbrough will cost just £3.25 and £3.35 at The Three John Scotts in Hull.

However, those looking to enjoy a pint should be warned – drinks are not always cheaper the further north you venture.

The Albert and The Lion in Blackpool, The Mount Stuart in Cardiff and The Captain Alexander in Liverpool all serve a pint of Carling for £3.79.

But The William Morris in Oxford serves the same drink for £2.59.

Meanwhile, the price of food in Greene King, which runs more than 2,700 pubs, restaurants and hotels, also varies across the UK.

As the price of food and drink continues to rise, families are now struggling to put money away for a rainy day.

Research by Nous.co found 41 per cent of those surveyed in Manchester claimed they were unable to save due to the cost-of-living crisis.

Similarly, 37 per cent of Londoners and 31 per cent of people in Newcastle Upon Tyne answered the same.

It comes after it was reported that the UK economy contracted by more than first thought between July and September and growth has been weaker than estimated.

The Office for National Statistics (ONS) said gross domestic product (GDP) fell 0.3 per cent in the third quarter of 2022 – worse than the 0.2 per cent decline initially estimated.

Individual bills from participants were combined for each location then split by the number of respondents to get the average figure for each cost.

Those surveyed in Liverpool gave figures for their costs that suggested people pay a mean of £235.80 on gas and electric each month.

In Nottingham the average joint gas and electric bill came out as £293, with water costing a mean of £44.60.

Meanwhile in Bristol electricity and gas bills were much cheaper at an average of £145.88, perhaps due to people being very careful with use.

Up in the north east in Newcastle the cost of living survey showed an average of £179.80 was being spent on gas and electricity.

Mother-of-two Sarah Randall, 54, from Eltham, said her energy bill has increased by 35 per cent in just 10 months.

She has also noticed a sharp rise in her food bill – spending an average of £680 per month on a food shop for herself, her partner Danny Podevin, 51, and son, lift engineer Joseph Podevin, 24.

The grandmother-of-one, who lives in a three-bedroom terraced house in Eltham, southeast London, said matters haven’t been helped by the fact that bricklayer Danny, who would normally be earning around £45,000 per year, has fractured his spine and is currently unable to work. 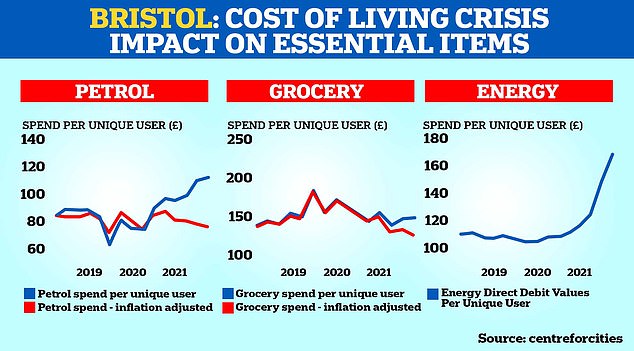 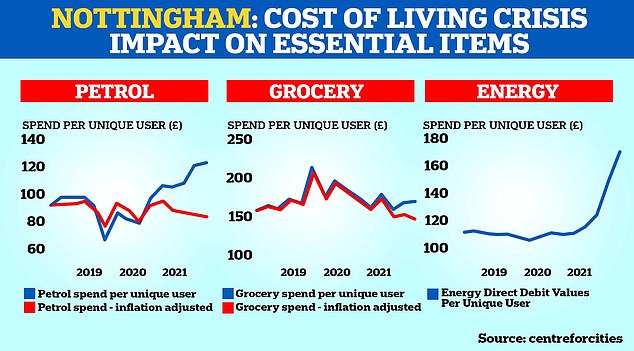 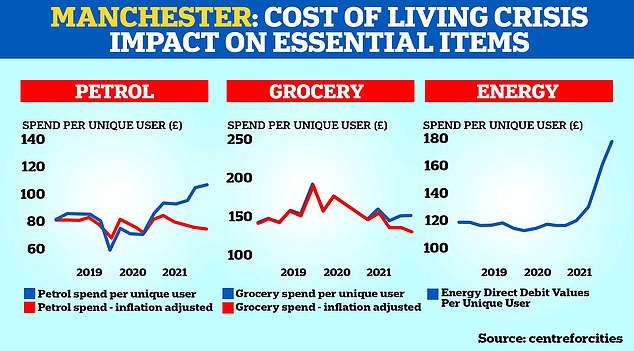 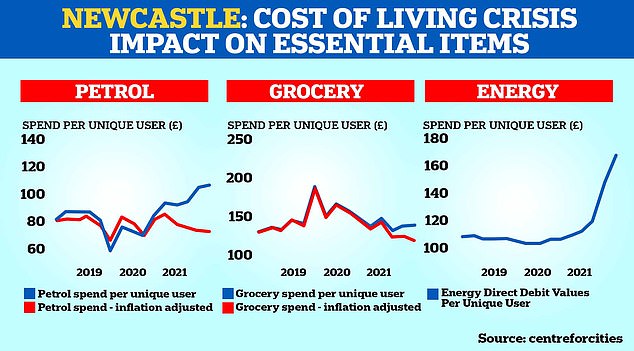 Branches in the south and London

Wetherspoon branches in the north and regions

The Albert and The Lion, Blackpool 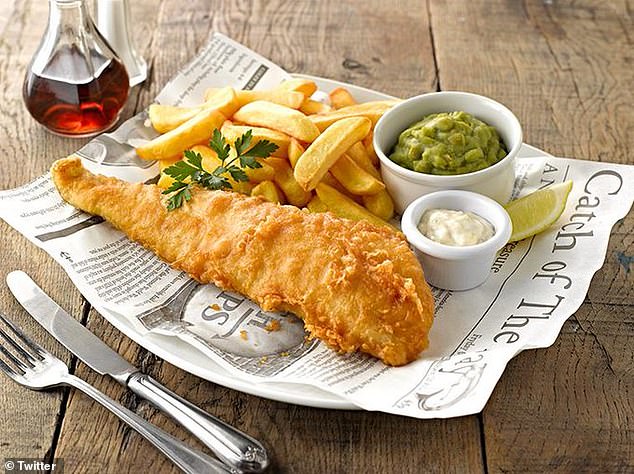 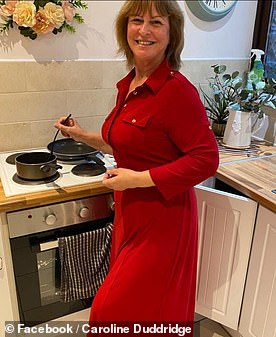 Caroline Duddridge (pictured), 63, says it’s a ‘no brainer’ and an ‘important lesson for the kids’ to make sure the cost is spread evenly between everyone, especially amid a cost of living crisis

‘One month the energy company tried to charge me £471. I spent 45 minutes on the phone to them trying to sort it out. They said it was because I hadn’t done my meter readings so they’d calculated an estimate.

‘If I hadn’t rung up when I did they would’ve just taken that amount out of my account every month. Some people don’t even have that much in their account to take out in the first place.’

Personal Assistant Sarah, who works in investment banking and earns £55,000 per year, added: ‘We’re lucky because I’ve got a good job in the city and our mortgage has been paid off but if this had happened a few years ago we would really be feeling the pinch.

‘I’ve also noticed that food prices have doubled. For example I used to get a big tub of butter for around £2.50, but now I’m spending about £4 on one.

‘The prices are increasing week by week. You go into the supermarket one week and things are £1 more expensive than they were a few days earlier.

‘Christmas has been particularly expensive this year. I usually spend about £30 on a turkey but this year they’re £45 – that’s a 50 per cent increase.’

Data from the cost of living tracker on Centreforcities.org also revealed how spending on petrol had risen in some cities more than others.

In Liverpool people spent an average £14.18 more on petrol compared to this time last year and £17.33 in Nottingham. 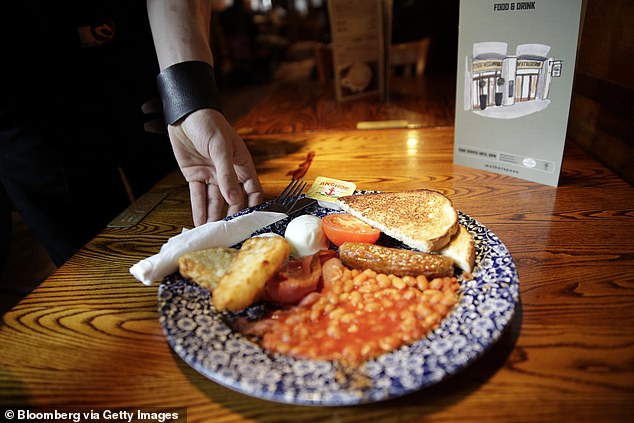 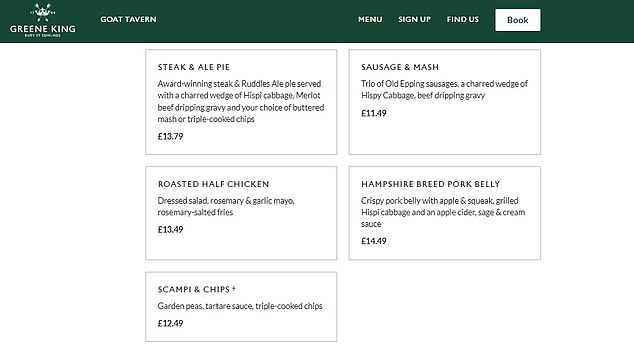 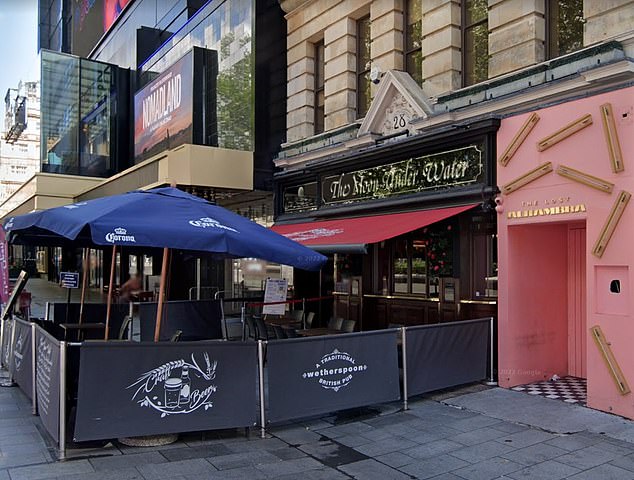 At The Moon Under Water (above), a Wetherspoon branch in Leicester Square, London, a pint of Stella costs a huge £6.45 and a traditional breakfast will set you back £8.15 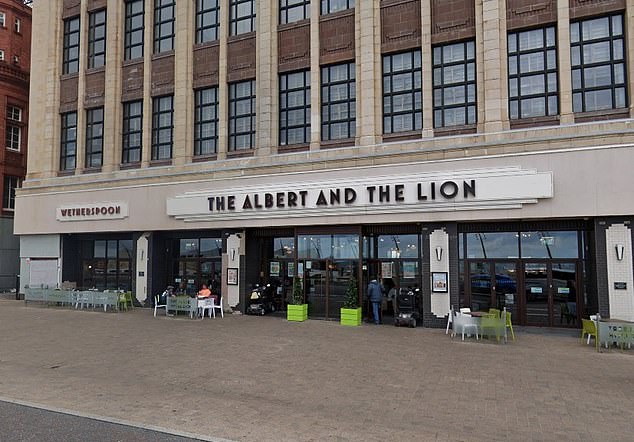 The Albert and The Lion in Blackpool (pictured), The Mount Stuart in Cardiff and The Captain Alexander in Liverpool all serve a pint of Carling for £3.79

It recently emerged an Aldi store was even forced to place security tags on packets of sweets worth as little as 85p following a national surge in shoplifting sparked by the cost-of-living crisis. 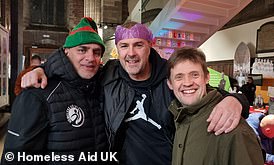 The budget supermarket’s Rushey Green branch in Catford, south London, has placed yellow security stickers on a range of its confectionary items – including a Kinder Snack Bar priced at 85p, Haribo Tangfastics costing £1 and a pack of five Cadbury Twirls selling for £1.05.

It comes after new official data revealed the cost-of-living crisis is weighing more heavily on people living in the most deprived areas of England.

The Office for National Statistics’ (ONS) survey in November exposed divisions across the country in terms of how people are being affected by higher living costs.

The vast majority of adults in the UK reported seeing the price of their food shop rise, as the consumer prices index (CPI) inflation rate hit 11.1 per cent in October.

On the other hand, people living in the least deprived areas of England appeared more likely to have made energy efficiency improvements to their home, the ONS’s survey found.

More than a third said they had in November, compared with less than a quarter of those living in the most deprived areas.

The ONS used the Index of Multiple Deprivation (IMD) to classify areas into five groups, ranging from the most deprived to least deprived fifth of areas. 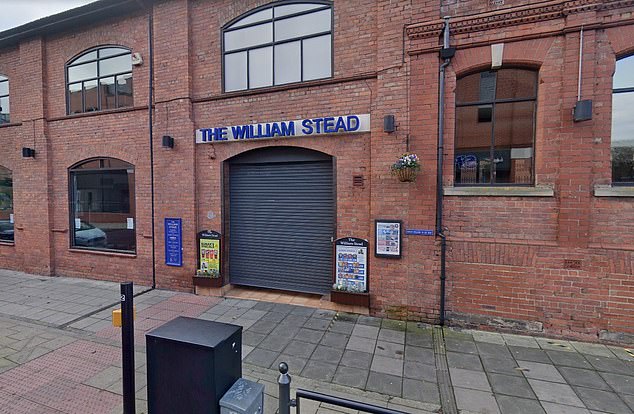 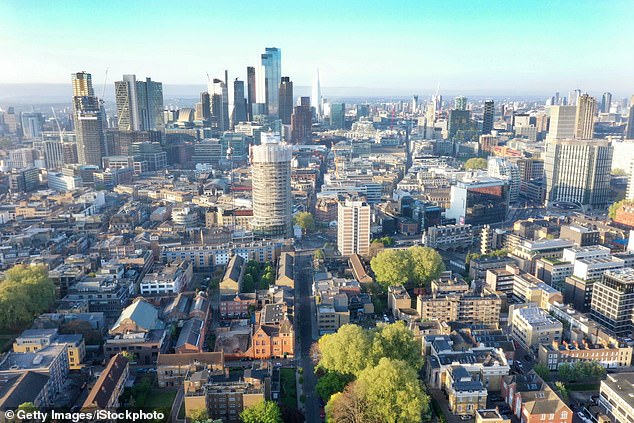 MailOnline also surveyed a number of people in five of the UK’s biggest cities and found some surprising findings on their cost of living. Pictured: Islington, London 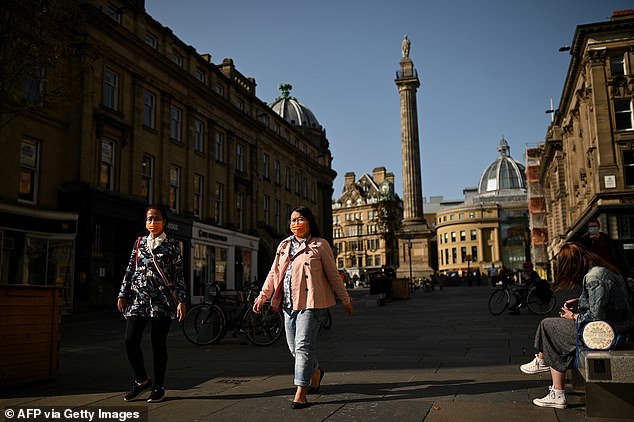 Liverpool, Nottingham, Bristol, Newcastle (city centre pictured) and London produced a split on average monthly expenses that showed evidence of a north-south divide – at least in some areas 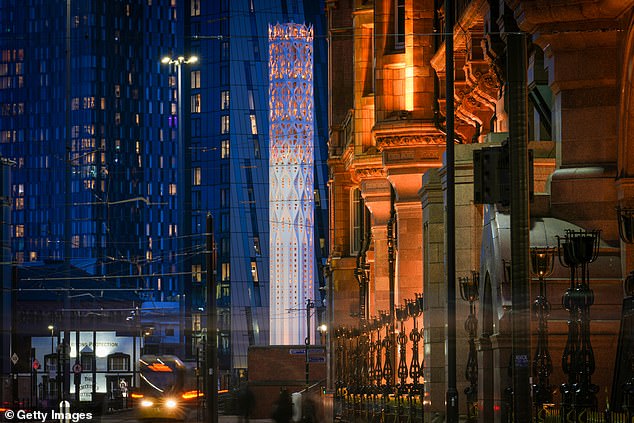 Research by Nous.co found 41 per cent of those surveyed in Manchester (above) claimed they were unable to save due to the cost-of-living crisis 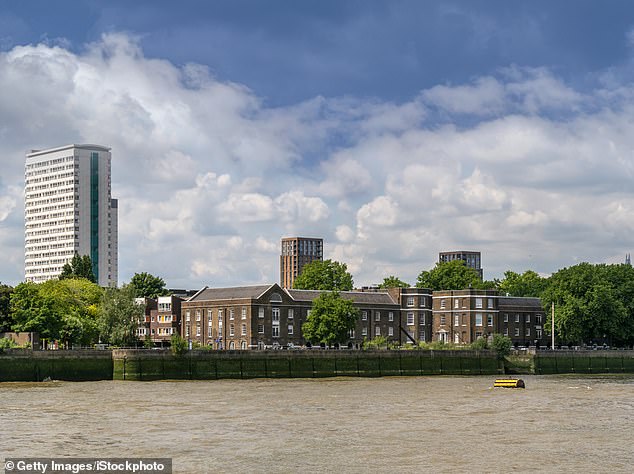 The IMD takes into account key domains such as income, education, health and crime to determine the deprivation of an area – with cities like Manchester, Liverpool, Kingston upon Hull and London being home to some of the most deprived neighbourhoods in England.

Wages fall 3.9% – the fastest rate in 13 years – against spiralling prices as cost-of-living crisis forces struggling over-50s back into jobs market 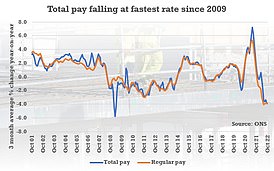 Official figures showed total wages declining by 3.9 per cent a year in the quarter to October, taking CPI inflation into account

Wales and Scotland were not included in the analysis due to the relatively smaller sample sizes in its survey, the ONS said.

People living in the most deprived fifth of areas in England were more likely to be worried about the rising cost of living, at 84 per cent compared with 70 per cent of those in the least deprived areas.

There was also a stark contrast between levels of concern over the ability to afford energy bills, as prices surge for households across the UK.

More than three fifths among those living in the most deprived fifth of areas of England said they found it difficult to pay energy bills in the latest period in November, and a tenth said they were behind on their bills.

Meanwhile, just over a third of people living in the most affluent areas said they faced affordability difficulties, and only 2 per cent said they were behind on their bills.

The governor of the Bank of England, Andrew Bailey, recently admitted that higher inflation is hitting lower income households harder because a bigger proportion of their spending goes on essentials like food and energy.

Greg Marsh, Co-Founder and CEO of Nous.co, said: ‘The cost-of-living crisis affects households in very different ways. Huge regional variations exist in pricing for basic goods and services. Larger households, and those on lower incomes are especially likely to be hard hit.

‘It’s crucial therefore that you use free tools out there, like our household finances tools, to understand how your family will be impacted, and make a plan that works for you.’

US warns of potential Iran-linked attack, send B52s to region