Cost of CHRISTMAS crisis: How hard-pressed families face paying £60 more for festive dinner this year compared to last year – with Lidl and Aldi seeing more than 20% sales rise as shoppers battle with soaring prices and bills

Hard-pressed families will have to spend £60 more in December to buy the same items as last year while the cost of a Christmas dinner is up 9.3 per cent as shoppers battle with soaring prices and bills.

Groceries are still 14.6 per cent more expensive than they were a year ago but this is down from last month’s 14.7 per cent in a sign that the pace of inflation is easing slightly, according to Kantar data.

The cost of a frozen turkey is up 15 per cent on last year, while parsnips have increased by 30 per cent, potatoes 20 per cent and cranberry sauce 5 per cent.

However, sales of Christmas puddings are down year-on-year as consumers leave their seasonal purchases until later to try to manage budgets in the run-up to Christmas Day. 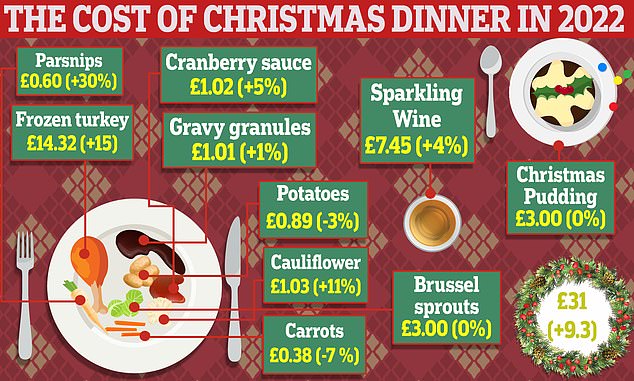 The cost of a frozen turkey is up 15 per cent on last year, while parsnips have increased by 30 per cent, potatoes 20 per cent and cranberry sauce 5 per cent 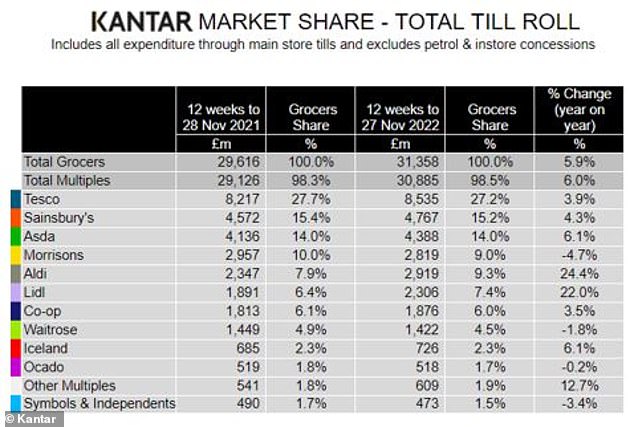 Meanwhile, the strong growth of the discounters continued over the latest 12 weeks, Kantar’s data shows, with both Aldi and Lidl opening new stores across Britain

Even the football World Cup has failed to set supermarket tills ringing, with take-home beer sales nudging up 5 per cent to £230 million, but mostly due to increased prices.

Meanwhile, the strong growth of the discounters continued over the latest 12 weeks, Kantar’s data shows, with both Aldi and Lidl opening new stores across Britain.

Lidl’s year-on-year sales increased by 22 per cent, pushing its market share to a record 7.4 per cent.

An additional 1.5million households shopped with Aldi compared with last year as it increased sales by 24.4 per cent to claim 9.3 per cent of the market.

Fraser McKevitt, head of retail and consumer insight at Kantar, said: ‘As we move into the busiest time of the year for supermarkets, there are signs that the pace of grocery price inflation is easing off slightly as we saw a small dip of 0.1 percentage points this month – the first drop in 21 months.

‘Grocery inflation still has a long way to come down though and based on the current rate, shoppers will have to spend an extra £60 in December to buy the same items as last year.

‘The cost of a traditional Christmas dinner for four has hit £31 in 2022, an example of just how much rising prices are impacting people at the tills and in their daily lives.’

However, Kantar said the coming month was on course to be the biggest ever for take-home grocery sales due to the combination of inflation and festive spending.

Mr McKevitt said: ‘December looks set to be a record-breaking month with sales going above the £12 billion mark for the first time.

‘We’re expecting Friday 23 December to be the busiest day for pre-Christmas shopping.’

He added: ‘We’re seeing yet more evidence of the coping strategies shoppers are adopting to mitigate rising costs, and in particular own-label sales are growing at pace, now up 11.7 per cent year on year.

‘The cheapest value own-label lines have soared by 46.3 per cent, but people still want to find room for treats at this time of year and this is driving growth at the other end of the spectrum too. 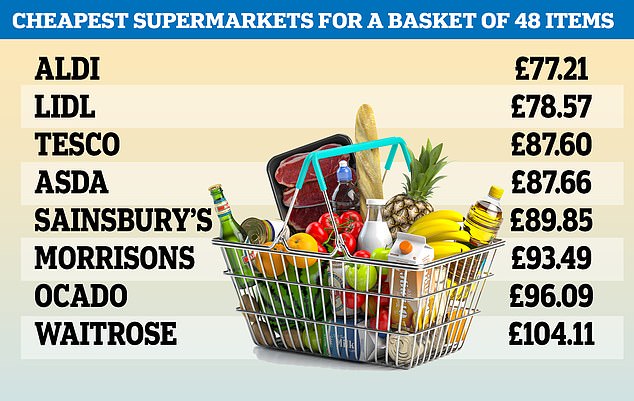 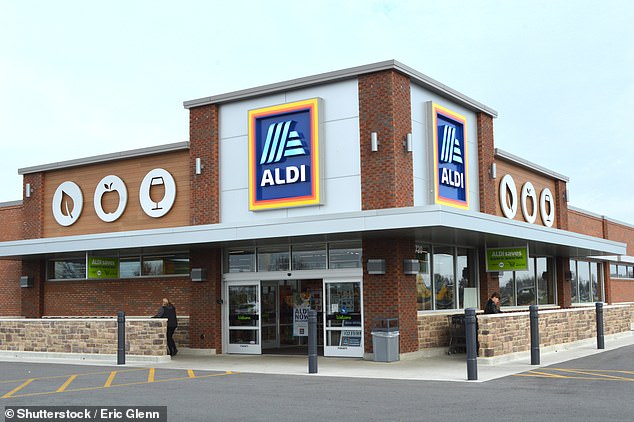 Aldi was the cheapest supermarket when Which? looked at 48 popular grocery prices

It came as Aldi was crowned the UK’s cheapest supermarket in November with shoppers saving almost £27 on a basket of item.

A basket of goods at the budget store was £77.21 on average, according to analysis by Which?’ comparing prices of a shop including 48 popular grocery items at eight of the UK’s biggest supermarkets.

Asda was the cheapest in a list of supermarkets when comparing a larger trolley of goods with 149 items.

It was also reported that a fifth of families in the UK say they are going to ask their guests to pay towards their Christmas dinners.

New research from the household finances firm Nous suggests over half of those surveyed were worried about how they would afford to pay for things over the festive period.

And 36 per cent said they would reduce spending on Christmas food and 34 per cent will lessen how much cash goes on Yuletide drinks. 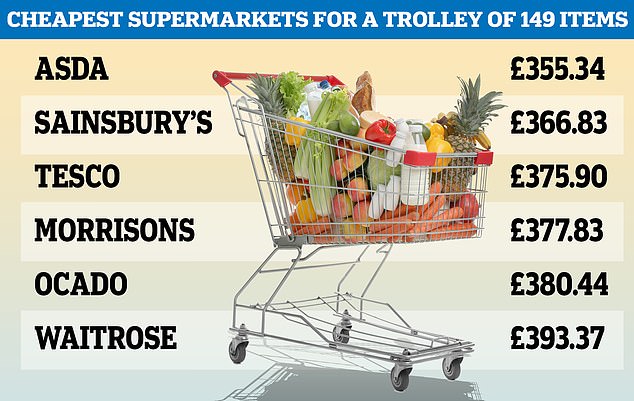 Elsewhere, nearly half of Brits (46 per cent) said they would prefer something different on their plate this Christmas to the traditional turkey and all the trimmings, according to new data from Vivino, the world’s most downloaded wine app.

Just 35 per cent of Brits said they enjoy the process of preparing the traditional Christmas dinner, with a further 35 per cent branding it ‘a hassle’.

Given a free choice, Christmas dinner for many Brits would look completely different this year with roast beef, pizza, takeaway Chinese, takeaway curry, fish and chips and bangers and mash appearing on the list as ideal Christmas meals.

Dinner choice isn’t the only area where Brits are shunning tradition this Christmas, with more than a third of Brits (38 per cent) planning to try new things when it comes to decorations, hosting, wine selection and gifting

When it comes to wine traditions specifically, 9 in ten Brits have opted to throw out the ‘rule book’ and enjoy wine the way they want.

31 per cent have drunk wine as soon as the bottle is opened, ignoring the idea of ‘letting it breathe and aerate’.

Almost a third (30 per cent) are happy to drink wine that’s been open for more than 24 hours and more than a quarter (27 per cent) aren’t fussed about drinking wine from the ‘right’ glass, instead going for a vessel of their own choice such as a goblet, tumbler or even a mug. 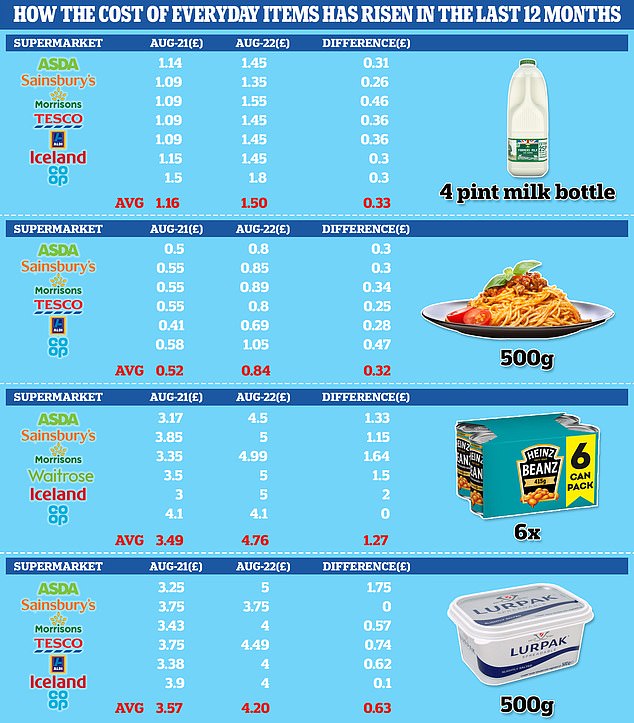 With Britons already facing a double whammy of high fuel and rising energy prices, analysis by MailOnline has revealed how a four-pint milk carton now costs, on average, 34p more than it did 12 months ago. The cost of an average 500g pack of own-brand spaghetti has also rocketed up by 33p – from 52p to 85p – since August last year, while a 500g pack of Lurpak is now 63p more expensive – up from £3.58 last year to £4.21 this year

Paul Jones, Wine Director at Vivino, commented: ‘It’s likely many people will be doing things differently this Christmas. But like wine, there shouldn’t be any set rules when it comes to how you enjoy yourself, everyone’s tastes are different.

‘Traditional or non-traditional. Turkey with all the trimmings or takeaway on the sofa. Wine from a wine glass or wine from a tumbler.

‘It really doesn’t matter as long as you enjoy things your way. At Vivino we can help everyone to find the perfect match for their Christmas choices.’

In August, it was reported that supermarket shoppers are paying up to 20 per cent more for cupboard staples including butter, milk and spaghetti, than they were last year.

Supermarkets are also facing a backlash from customers over the cost of baked bean.