A grandmother died five months after suffering extensive leg and pelvis injuries when a drink and drug driver deliberately crashed into her home in a suicide bid following a violent row with his girlfriend.

Retired civil servant Edna Kearns, 93, suffered serious injuries when she was flung from her bed after drink and drug-crazed Michael Vose, 40, ploughed a 155mph BMW X6 through her bedroom wall at 5am following a tiff with his girlfriend.

The victim, a great-grandmother from Westhoughton, near Bolton, Greater Manchester was pulled from the rubble and underwent life saving surgery to her legs, pelvis and a broken ankle – but she died five months later due to a blood clot in the lungs and deep vein thrombosis. 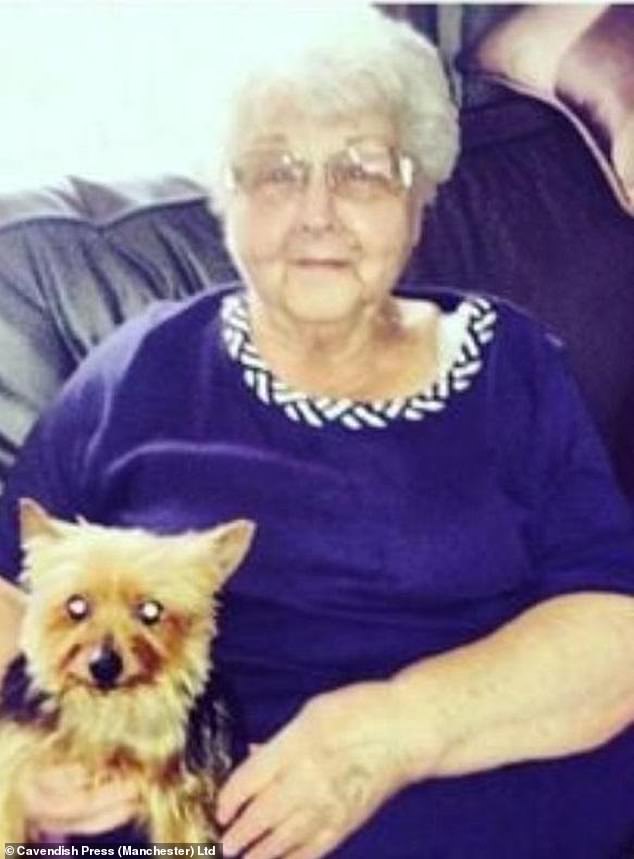 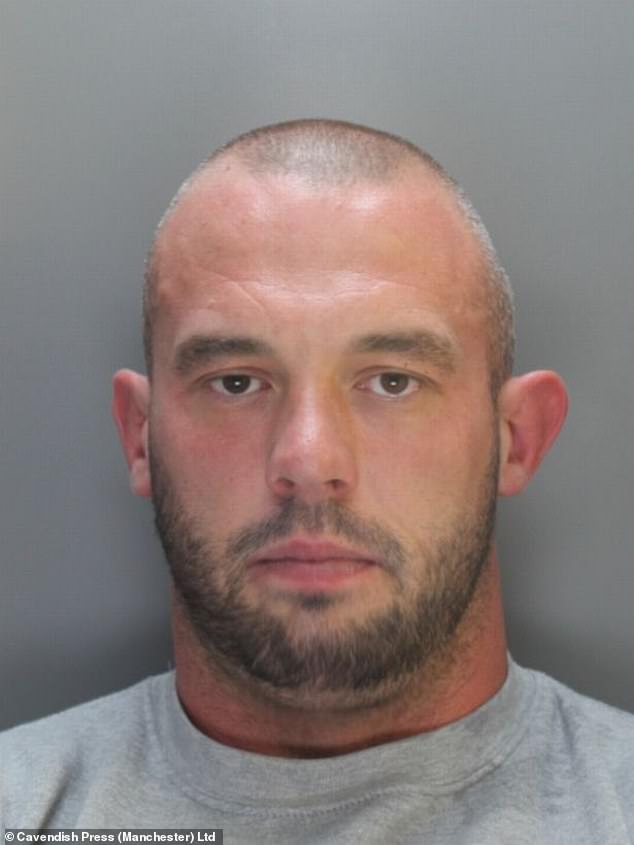 Michael Vose, pictured, had a row with his girlfriend following a drink and drug binge and drove off before deliberately crashing into Ms Kearns’ bungalow 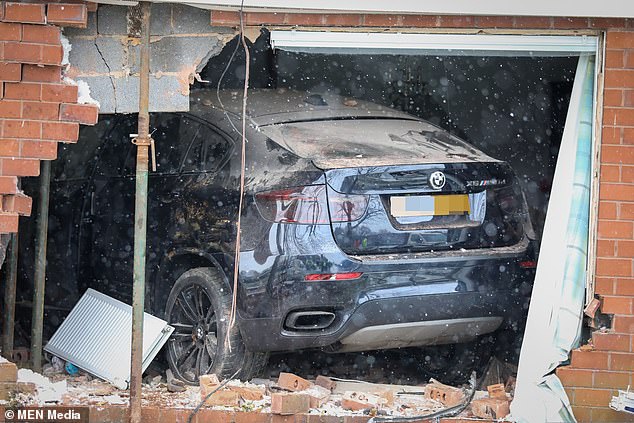 Experts said her death was not directly linked to the injuries suffered when her home was destroyed.

Vose, a £60,000 a year construction site manager from St Helens, Merseyside was seen staggering away from the scene in the immediate aftermath of the crash without calling emergency services. He was later arrested when police spotted him walking in the middle of a dual carriageway.

Tests showed Vose was almost five times the drug-driving limit and more than twice the alcohol limit. He subsequently blamed his mental health issues for his behaviour and insisted he was ‘suicidal.’

At Bolton Crown Court relatives of Mrs Kearns condemned Vose as a killer as he was jailed for four years after he admitted causing serious injury by dangerous driving, criminal damage and a separate offence of assault. He was also banned from driving for five years which will start when he is released on parole in 2024.

Prosecutors decided against charging him with the more serious offence of causing death by dangerous driving after doctors concluded the cause of Mrs Kearns’ death could not be linked to the crash. The maximum sentence for causing serious injury by dangerous driving is five years.

Sentencing Judge Martin Walsh told Vose: ‘You drove off in an intoxicated and highly charged and emotional state and the force of the collision was such that your vehicle penetrated the wall of Mrs Kearns’ bungalow and struck the victim as she lay asleep in her own bed. 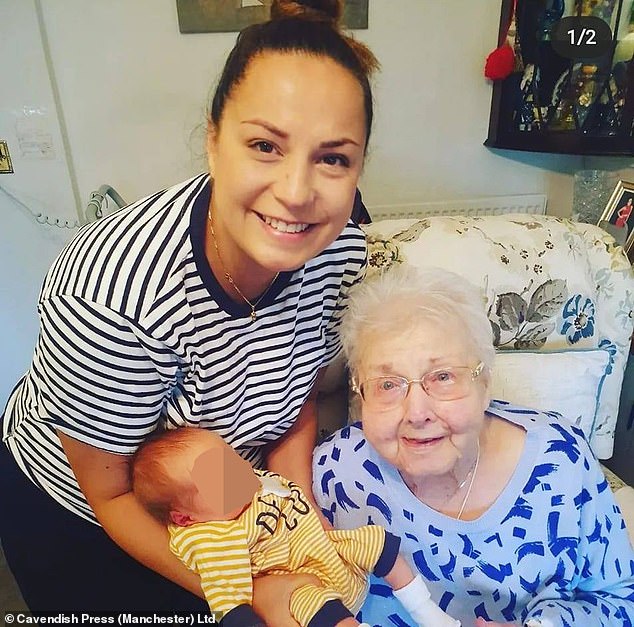 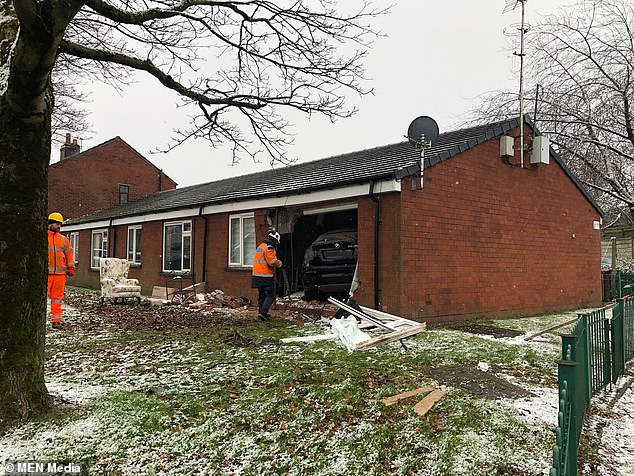 ‘These were aggressive and impulsive actions. A conscious decision was taken by you to drive the vehicle aggressively at a time when your ability to drive was heavily impaired by your heavy consumption of alcohol and cocaine.. The manner of your driving falls into the highest category of seriousness..’

Earlier,  Vose wept over a video link from Forest Bank jail as a statement made to police by Mrs Kearns whilst she was still being treated for her injuries was read out.

It said: ‘What happened changed my life forever. I was very independent prior to the last five years and was getting by. This has taken all that completely away from me. If it hadn’t been for my neighbours and the emergency services getting me out of the rubble, I would have been dead.’

She added: ‘I’ve suffered pain in my leg before but it’s nothing compared to what I am suffering now. The pain is so excruciating, I would rather die. At the time of making this statement I have been living in a nightdress for three months and I can’t wait to get home and put my own clothes on again and having my hair and nails done. I just want to get home and settled again but I will never be the same person again.

The tragedy occurred November 28 last year after Vose had been on a seven hour cocaine and lager binge whilst out with his girlfriend Lisa Kelly at pubs in the Westhoughton area. 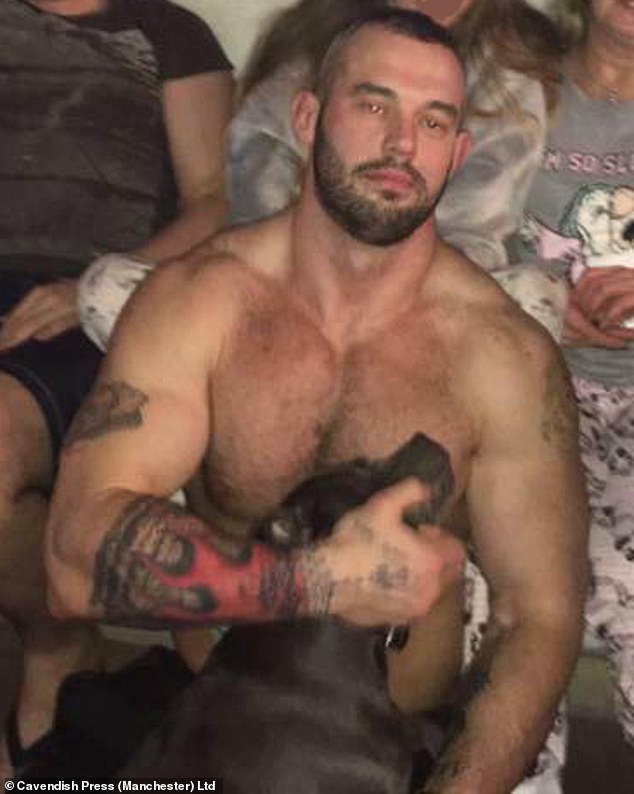 At the end of the evening he drove her back to Miss Kelly’s flat and she later woke up in bed at 5am to find Vose shouting abuse at her and accusing her of being unfaithful.

During the ensuing row he twice put his hands around his girlfriend’s neck and then went on a terrifying rampage around her flat causing more than £1,000 worth of damage to her flat, including smashing a large bedroom mirror and punching a hole in the wall with his bare hands.

As Miss Kelly dialled 999, Vose fled the blood spattered apartment then leapt behind the wheel of his BMW and drove off into the night.

Alistair Reid prosecuting said: ‘Before he left he was heard shouting he was going to kill himself. He drove towards a mini roundabout and went directly over towards a railing fence and then into the bungalow. Police officers could see no evidence that this was anything other than a deliberate act. There was no evidence of skidding or loss of control.

‘The vehicle crashed through the fence and bedroom wall of Mrs Kearns’ home as she was asleep in bed. The front wheels of the BMW impacted with her bed which was dragged and rotated 90 degrees from its original position.

‘A neighbour who heard the crash looked out and could see a male staggering outside the address before walking away from the scene making no apparent effort to seek any form of assistance.’

‘A passenger in a taxi stopped at the scene and heard Mrs Kearns crying for help and called the emergency services whilst reassuring the victim the best she could. Fire services had to remove rubble from Mrs Kearns’ bed before she was taken to hospital. Substantial structural damage was caused to the house. 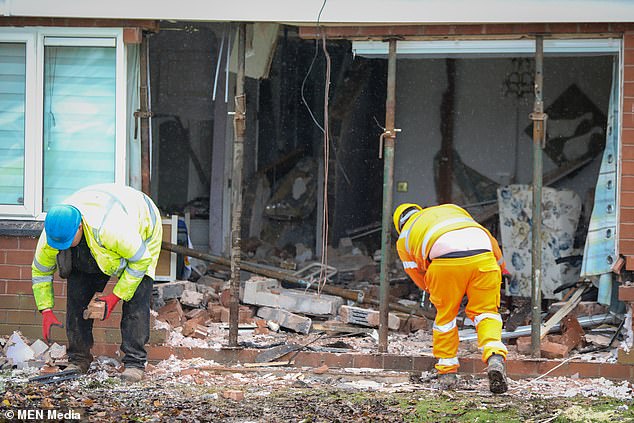 Mrs Kearns was kept in hospital for three months until February this year and she was discharged to a care home. She was later readmitted to Bolton Hospital and died on April 8 (pictured: her badly damaged house)

Mrs Kearns was kept in hospital for three months until February this year and she was discharged to a care home. She was later readmitted to Bolton Hospital and died on April 8.

Mr Reid said: ‘Mrs Kearns’ family have also made statements which are very emotional. The prosecution has to acknowledge their view expressed which holds Vose responsible for the subsequent death of Mrs Kearns is not a matter the court is sentencing for.

‘But it is clear emotional harm has been caused to the family as a consequence of what happened. Her son focuses on his mother’s independence prior to this incident and the loss of control she felt. The defendant ignored the rules of the road and disregarded the great danger caused to others.

‘Mrs Kearns always kept a light on at night to show her home was occupied – and so it was always likely there was someone at home that evening.’

When Vose was tracked down to the dual carriageway he was seen to have swollen hands and a large cut to his head and he was hostile and aggressive to police. 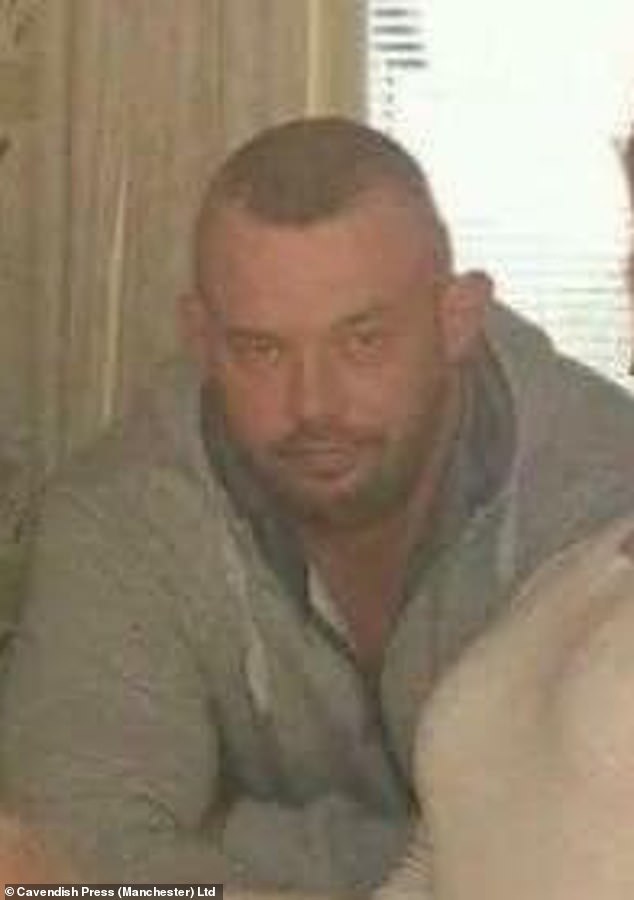 Vose, when arrested, was more than twice the drink drive limit and almost five times the cocaine driving limit

Vose who also admitted assault occasioning actual bodily harm had previous convictions for drink-driving, driving whilst disqualified and having no insurance and had previously been jailed for kidnap and blackmail.

He was unrepresented by counsel due to the barrister’s strike but a mitigation document prepared on his behalf read: ‘He does not expect forgiveness from the family but he wants it known that if he could turn back time he would do so.

‘He fully recognises and is ashamed about the tremendous sadness and hurt he has caused. He has a mental disorder which causes him to act impulsively.

‘He is full of remorse for what happened and accepts taking drink and drugs that night.

‘In an emotionally charged situation he made the awful, foolish and selfish decision to get behind the wheel of his car to take his own life by driving into a building. This impulsive act has had devastating, harrowing and catastrophic consequences. He is unable to forgive himself for his actions.’

At the time of Mrs Kearns’ death, her grand-daughter Lesley said: ‘Grandma was a very special lady, she was a fighter till the very end. We’ll never forget her witty sense of humour she kept until the very end.’