Fencing surrounding the perimeter of the Capitol was finally removed on Saturday, signaling a return to normalcy six months after the January 6 Capitol riot – but the public is still banned from going inside the building.

‘The United States Capitol Police has taken down the fence around the U.S. Capitol,’ the agency said in a statement Sunday.

‘These changes were made based on the current threat environment and recent enhancements to the USCP’s response capabilities,’ the statement continued.

Acting U.S. Capitol Police Chief Yogananda Pittman said: ‘We are extremely grateful for the support we continue to receive in support of our critical mission. We are prepared to quickly enhance our security posture should the need arise.’

Despite the step toward reopening, the Capitol still remains closed to visitors, which has been the case since the onset of the coronavirus pandemic in March 2020. 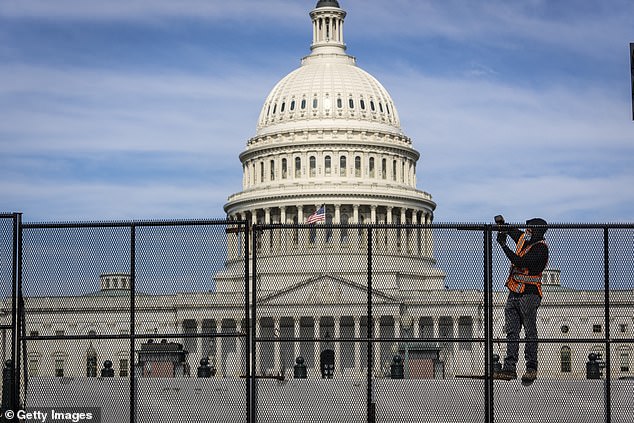 Workers took down the remaining fencing surrounding the Capitol Building Friday and Saturday. Here a worker disassembles the fencing in front of the iconic rotunda 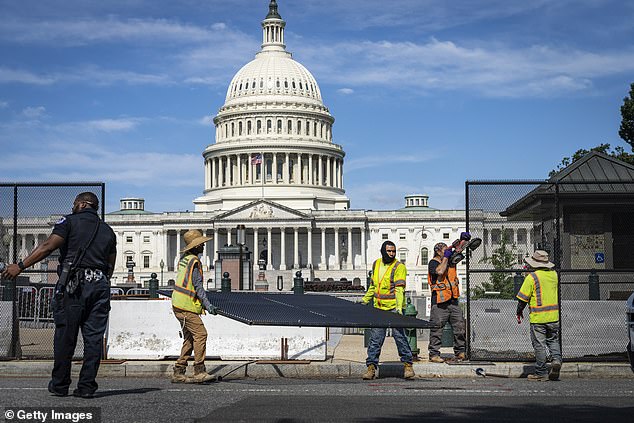 ‘These changes were made based on the current threat environment and recent enhancements to the USCP’s response capabilities,’ U.S. Capitol Police released in a Sunday statement 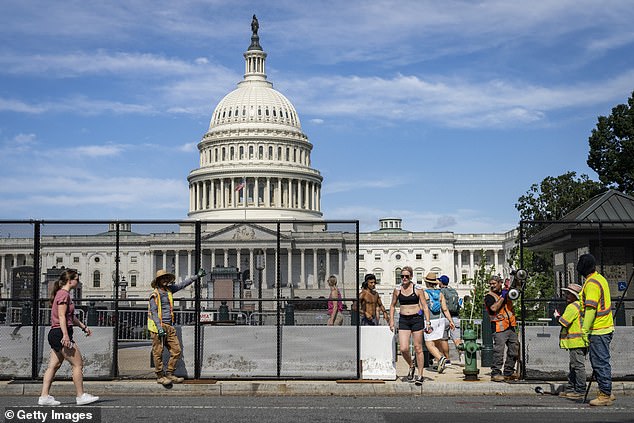 Members of the public enter and exit the Capitol plaza on Saturday as workers remove the security fencing, which has been in place since the January 6 Capitol riot

Fencing was put up around the entire Capitol Hill complex in January 2021, after a mob of pro-Trump supporters descended on Congress and breached the building in an attempt to stop the body from certifying the election for Joe Biden.

The large ‘outer perimeter fence’ was removed in March 2021, but a smaller fence around the actual Capitol Building remained in place. That fencing has now been removed.

‘The Department greatly appreciates the community’s patience and understanding during this challenging time,’ USCP wrote in its statement on the fencing coming down.

The public immediately began walking closer to the Capitol than they have been able to in more than half-a-year.

Republicans have been highly critical of USCP and Democrats’ reluctance to take down fencing, send home deployed National Guard and reopen the Capitol to visitors. 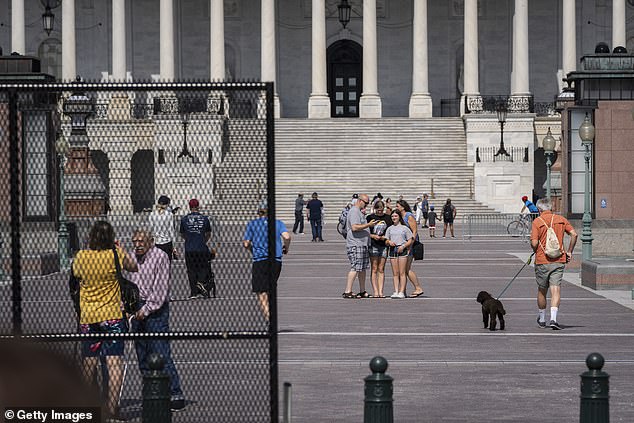 Visitors, however, are still not permitted inside the building. The Capitol has been closed to the public since the onset of the coroanvirus pandemic in March 2020 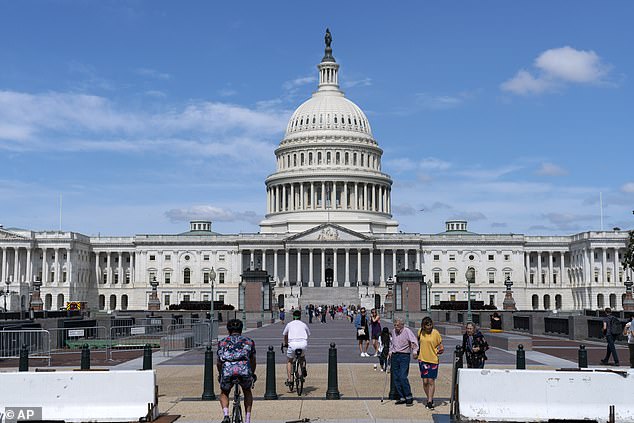 The House sergeant-at-arms released a memo on Wednesday to all members of Congress and staff, which was obtained by DailyMail.com, announcing the impending removal.

‘Based on USCP’s assessment of the current threat environment and USCP’s enhanced coordination with District of Columbia, neighboring state and federal law enforcement partners, the Board supports USCP’s recommendation to remove the temporary fencing around Capitol Square. Removal is expected to begin as early as Friday, July 9th and conclude within three days, weather permitting,’ it read.

The black perimeter fence is one of the last remaining signs of the January 6 riot. Even with its removal, the Capitol will remain closed to most visitors, the memo said.

Capitol cops initially set up 7-feet steel fences topped with razor wire and road blocks from the Lincoln Memorial to the Capitol in an operation that cost $1.2million, but it has since been scaled back.

The National Guard, which was deployed in the aftermath of the attack, also left in May after months. 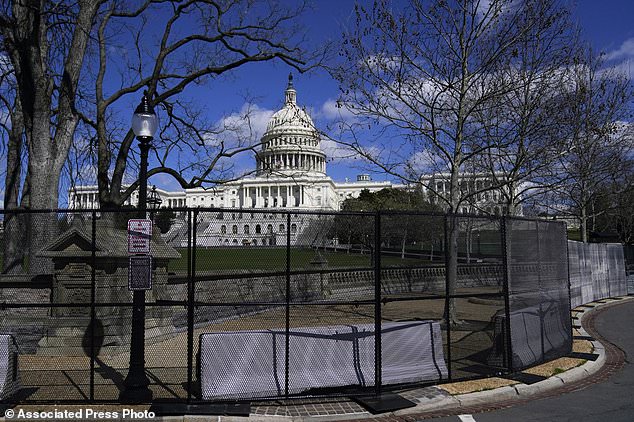 The tall, black fencing was installed around the Capitol after the January 6 riot. The larger Capitol Hill perimeter fencing was removed in March 2021, and the remainder around just the Capitol building came down four months later

‘Although the temporary fencing will be removed, current building access restrictions will remain in place,’ according to the memo.

Federal officials are aware of online chatter from far-right groups and people who believe in conspiracy theories discussing potentially returning to Washington as part of an unfounded and baseless conspiracy theory that Trump will be reinstated in August.

Five people died in the January attack, including a Trump supporter shot and killed by police inside the Capitol and three people who suffered medical emergencies in the crowd.

One police officer, Brian Sicknick, died from a stroke a day later and two other officers later took their own lives.

The U.S. Capitol Police will continue to monitor intelligence information and potential threats, and new fencing could be swiftly erected, the memo said.

‘The Architect of the Capitol has the ability to and will expeditiously reinstall the temporary fencing should conditions warrant,’ according to the memo.

The Capitol has been closed to most visitors for the longest stretch in the nation’s history, the one-two hit of the coronavirus outbreak that shuttered operations last spring and the insurrection that kept it off limits. 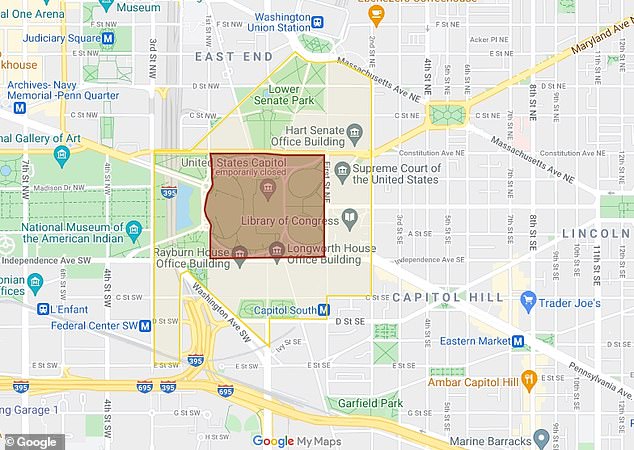 Capitol cops initially set up 7-feet steel fences topped with razor wire and road blocks from the Lincoln Memorial to the Capitol in an operation that cost $1.2million, but it has since been scaled back

The parklike grounds have been a favorite spot for visiting tourists to snap a photo of the iconic dome, and some 2.5 million visitors typically tour the inside of the building each year, among some 12 million who annually visit the campus-like complex of offices.

Removal of the fence will take up to three days, weather permitting.

Lawmakers have been away for the Fourth of July holiday week, but some are expected to return Monday.

During the virus outbreak, House lawmakers have been working under a proxy voting system that enabled them to avoid travel during the pandemic, though most now vote in person. Senators have mostly been back to business as usual. 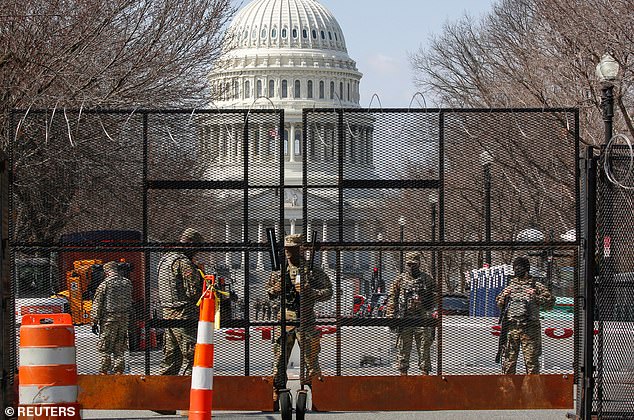 MARCH 4: National Guard soldiers, who were stationed at the Capitol for months, stand guard at a road block