A flight from Perth to Port Hedland was struck by lightning on Tuesday.

The Qantas Boeing 737 departed Perth Airport at 7.15am, but made a last-minute diversion to Karratha Airport during the two-hour flight.

Passengers were then transferred onto another flight which landed in the intended Pilbara town this afternoon. 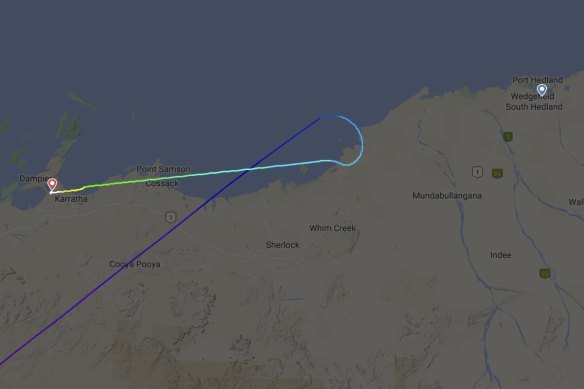 The flight diverted to Karratha Airport following the lightning strike.Credit:FlightRadar24

A spokeswoman for the airline confirmed the incident.

“Aircraft are designed to withstand and fly safely when struck by lightning but it is policy that they get inspected at their arrival port after a strike,” she said.

“At no point was the safety of the flight compromised.”

Upstream Aviation owner Tim Collins said it wasn’t unusual for lightning to strike an aircraft, but it was rare for a plane to divert its course in response.

“Aircraft are built in such a way that when lightning strikes an aircraft it passes through the structure of an aircraft and disappears,” he said.

“It doesn’t harm anyone inside, it doesn’t generally harm the aircraft and discharges itself back into the atmosphere.

“Often aircraft are struck and pilots don’t even know they’ve been struck because often you don’t see anything or feel anything.”

Collins said a cautionary diversion due to lightning was rare in Western Australia, and typically only occurred a few times a year.

“Engineers will assess the aircraft, and it’s unlikely they will find any damage at all and will return the aircraft to service,” he said.

The incident followed a deluge of rain overnight in Perth and other parts of Western Australia.