Flight MH17 WAS shot down by Russian-made missile, Dutch court confirms as long-awaited verdict into the disaster is finally delivered

The Malaysia Airlines flight MH17 was shot down by a Russian-made missile in 2014, a Dutch judge confirmed as the long-awaited verdict into the disaster is finally delivered.

Three Russians and a Ukrainian are on trial for their alleged roles in the aviation disaster, in which a Boeing 777 flying from Amsterdam to Kuala Lumpur was blown out of the sky over Ukraine, killing all 289 passengers and crew members.

The mid-air explosion and crash on July 17, 2014 happened amid a conflict between pro-Russia rebels and Ukrainian forces.

Presiding Judge Hendrik Steenhuis opened Thursday’s hearing and said the court’s view is that the MH17 was brought down by a Russian-made Buk missile launched from an agricultural field in eastern Ukraine.

In another important finding, Steenhuis said that the court believed that Russia had overall control at the time of a separatist region in eastern Ukraine, the Donetsk People’s Republic.

The crash scattered wreckage and bodies over farmland and fields of sunflowers.

The judge said he would go on to rule on other legal issues and the guilt or innocence of the suspects later in the hearing. 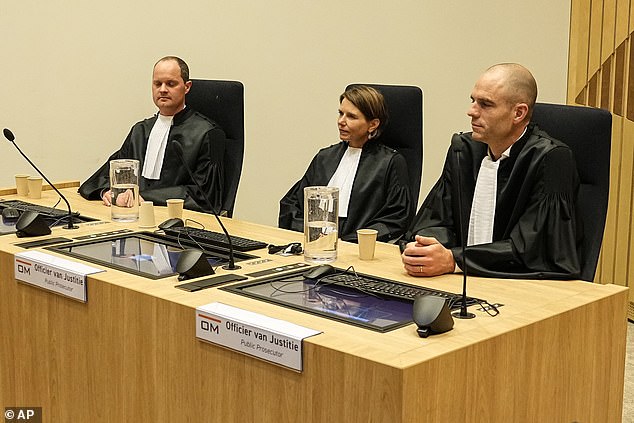 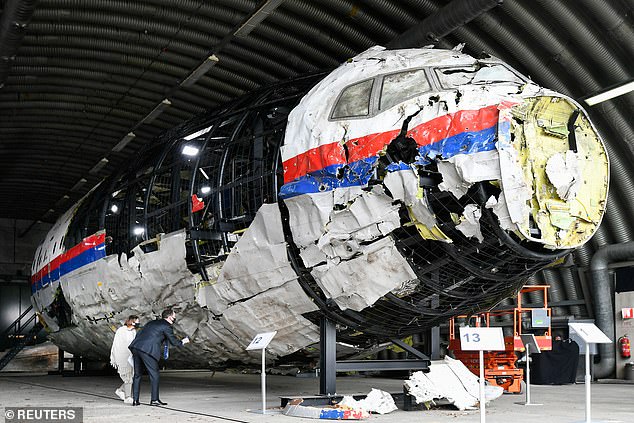 Lawyers attend the judges’ inspection of the reconstruction of the MH17 wreckage, as part of the murder trial ahead of the beginning of a critical stage, in Reijen, Netherlands, in May 2021 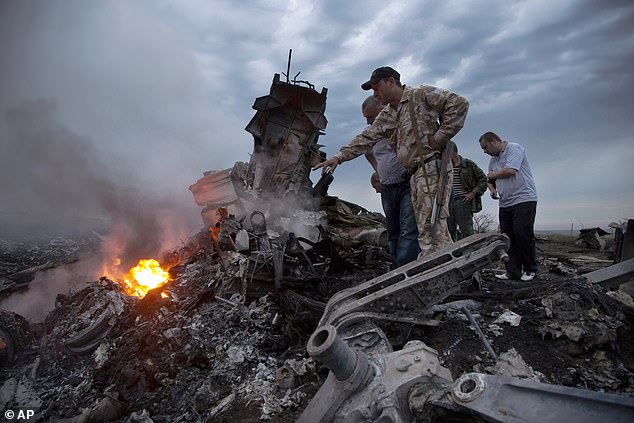 People inspect the crash site of a passenger plane near the village of Hrabove, Russian-controlled Donetsk region of Ukraine in July 2014

The courtroom was packed with relatives of the 298 victims of the aviation disaster, and ahead of the hearing, tension was high among those who had lost their loved ones.

‘The truth on the table – that is the most important thing,’ said Anton Kotte, who lost his son, daughter-in-law and his 6-year-old grandson when the MH17 was shot down. He said the hearing was a ‘D-Day’ for relatives.