Star footballer to serve a two-year suspended jail term as part of a pre-agreed deal with Spanish tax authorities. 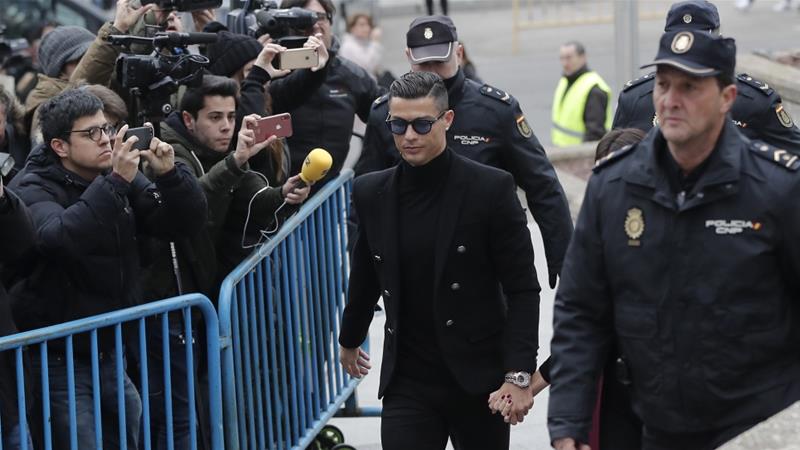 The 33-year-old Portuguese captain appeared in a court in the Spanish capital, Madrid, on Tuesday, over accusations of using shell companies outside Spain to hide income made from image rights.

The five-time world footballer of the year is unlikely to serve a jail term under the deal because Spanish law states that a sentence of under two years for a first offence can be served on probation.

Ronaldo, who plays for Italian club giant Juventus, came out of the courtroom smiling, pausing to sign autographs before leaving in a black van.

The charges against the striker stem from his days at Spanish league side Real Madrid, whom he played for from 2009-2018.

In 2017, a state prosecutor accused Ronaldo of four counts of tax fraud between 2011-2014 worth 14.7 million euros ($16.7m) via a shell company based in the British Virgin Islands and another in Ireland, known for low corporate tax rates.

They also accused the star footballer of “voluntarily” refusing to include 28.4 million euros ($33.6m) in income linked to the sale of his image rights for the 2015 to 2020 period to a Spanish company.

Ronaldo had previously denied the charges through his agents.

After reaching the deal, he paid a fine of 5.7 million euros ($6.5m), plus interest of about one million euros, in July 2018, the prosecutor’s office said last week.

Ronaldo, who is also facing rape allegations by a former model in the United States, is the latest football star to fall foul of tax evasion in Spain.

Barcelona’s Lionel Messi was handed a 21-month prison sentence in 2017 on similar charges, but Spanish law allowed him to exchange it for a fine.

Brazil’s president says ‘no doubt’ Nazism was a leftist movement