He reported Saturday's incident on Twitter without giving details. He has a large ranch in the central state of Guanajuato. 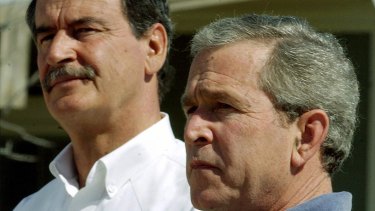 Then Mexican president Vicente Fox, with then US president George W. Bush in 2004.Credit:AP

Fox also tweeted: "I hold President Andres Manuel Lopez Obrador directly responsible for the security of myself, my family and my belongings."

Lopez Obrador responded via Twitter that he has instructed Defense Minister Luis Cresencio Sandoval to create a security detail to protect Fox and his family "but without the excesses" of prior administrations.

Lopez Obrador dismantled the Mexican equivalent of the U.S. Secret Service after being sworn in as president Dec. 1.