A former police officer who was found to have fabricated a lengthy same-sex relationship to claim a $6 million inheritance has been found guilty of misappropriating funds from the deceased’s accounts within hours of his death.

Okan Yesilhat, 38, who was described by a Supreme Court judge as “manipulative” and “calculating”, was found to have invented a 14-year-long same-sex relationship with a wealthy pharmacist in order to inherit his estate as the de facto partner.

Pharmacist George Sclavos, 65, died of a heart attack in his Leppington pharmacy on August 13, 2013. Mr Sclavos, who had never married and had no children, left his entire estate to his two nieces, Cleopatra Calokerinos and Anna Sclavos-Lahana.

Yesilhat, who was 30 years’ Mr Sclavos’ junior, claimed he’d secretly been in a relationship with the pharmacist, despite the then police officer having married twice in this period.

However, things had begun to unravel for Yesilhat, now a motor mechanic, even before he launched his ultimately unsuccessful challenge to the pharmacist’s will.

Within hours of the pharmacist’s death, more than $200,000 had been moved from his bank account into Yesilhat’s account. The Supreme Court later heard that this was the “largest single transaction ever on George’s accounts in one day” and the transfers “took all George’s credit and debit facilities to their available limits”.

Mr Sclavos was found barely conscious at 2.30pm. A pharmacy employee testified seeing Yesilhat standing outside the pharmacy while ambulance officers worked on Mr Sclavos, who was pronounced dead at 4pm. 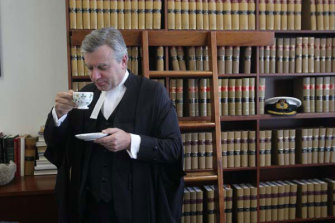 Yesilaht made transfers from the account between 5.43pm and 5.58pm that day. He claimed he had no idea that Mr Sclavos was dead.

During the battle over the will, Justice Michael Slattery said he was satisfied that Yesilhat “dishonestly diverted to himself or for his benefit all the funds transferred from the deceased’s accounts on and from the day of the deceased’s death.”

In rejecting his inheritance claim, Justice Slattery was scathing in his assessment of Yesilhat. Not only did he describe him as being “cold, very cold”, the judge said he had an “immense capacity for dishonest invention”.

In December 2018, Yesilhat was found guilty of 14 charges relating to the misappropriation of money from Mr Sclavos’ accounts.

In finding him guilty, magistrate Jennifer Atkinson noted that there was much evidence to show that Mr Sclavos was heterosexual and had relationships with women. The magistrate dismissed Yesilhat’s claim that he’d had a conversation weeks earlier with Mr Sclavos who’d given him permission to use his money. Instead, the magistrate noted that Yesilhat was previously a police officer and therefore “cannot be described as an unsophisticated witness.” She found that Yesilhat may have been motivated to move swiftly to remove the money knowing that Mr Sclavos’ bank accounts would be frozen due to his death.

Yesilhat was subsequently sentenced to a 2-year Intensive Corrections Order and 750 hours of community service.

On Friday, after a two-day hearing in April, the NSW Court of Appeal rejected Yesilhat’s renewed claim that he was the de facto of Mr Sclavos and therefore entitled to inherit his estate. Yesilhat has been ordered to pay costs in relation to his various unsuccessful legal challenges to the will.

On its 80th birthday, a look back at the fascinating history of the Lions Gate Bridge

How schools could go back: Village hall schools and summer lessons among ideas to save a generation