It’s Frantic Friday! 13 MILLION cars will take to Britain’s roads today as children break up from school and families make an early start on their summer holidays

Thirteen million cars are due to hit the roads today as ‘Frantic Friday’ brings gridlocked motorways and heaving airports as schools break up for the summer holidays.

Queues of up to an hour and a half are expected on some routes with more than five  million families due to make their getaways as soon as school ends today.

In London, peak traffic on the M25 will be around 4.30pm between junctions 7 and 16, with delays of more than 40 minutes.

On the M1, heavy traffic is expected from as early as 7.45am when delays will be at their worst.

Holidaymakers can also expect bottlenecks on the M5, with queues of more than half an hour in the early afternoon.

The traffic chaos will continue through the weekend, with another five million vehicles on the road tomorrow and a further 3.1million on Sunday. 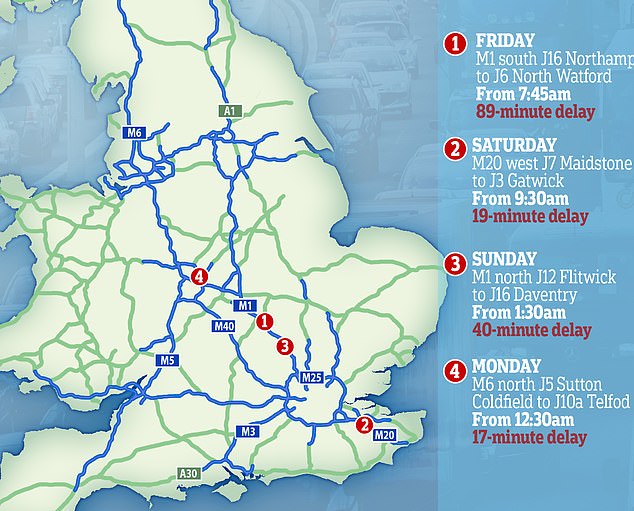 Any collisions or breakdowns could make the traffic jams even worse, with drivers urged to check their cars before they set out.

Scotland and Northern Ireland’s schools have already broken up, but today will be the end of the year for youngsters in England and Wales.

The Met Office is forecasting ‘wet and windy weather’ for large swathes of the UK, with conditions becoming ‘increasingly unsettled’ through the day.

The predicted 13 million trips this weekend will mean a 44 per cent increase on last year and the busiest summer getaway since 2014.

Some 5.3 million drivers embarking on day trips or longer breaks will battle for road space with regular commuters.

There will be another 5 million summer holidaymakers on the road tomorrow and a further 3.1 million on Sunday. 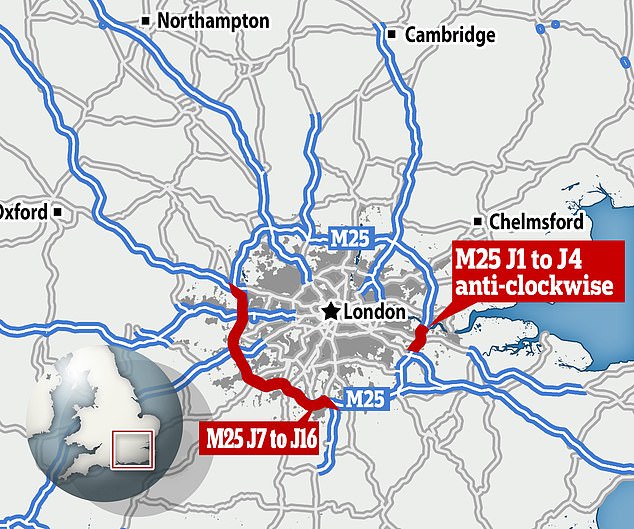 In London, peak traffic on the M25 is expected at 4.30pm today between junctions 7 and 16, with delays of more than 40 minutes

Thousands of holidaymakers have plans thrown into doubt by Ryanair strikes

Tens of thousands of Ryanair passengers had their holiday plans thrown into doubt last night after its pilots threatened to go on strike.

A trade union representing the budget airline’s pilots said its members will soon vote on whether to walk out following a row over pay and working conditions.

The ballot will open on July 24 and close on August 7 when the results will be announced.

Unions are legally obliged to give two weeks’ notice if they intend to launch industrial action.

This means the strike could go ahead as early as August 21, when the summer holiday season is still in full swing.

The protest is being led by the British Airline Pilots Association (Balpa), which also represents around 3,800 British Airways pilots threating to strike over pay in a separate dispute.

Ben Aldous of the RAC said: ‘Traffic jams are pretty much guaranteed from the end of this weekend and while it’s possible to predict where some of these will be, every summer we see extra delays caused by broken-down vehicles blocking lanes, leaving drivers faced with hours of frustration.

‘We therefore urge holidaymakers to heed the advice and spend just a few minutes checking the basics like oil, coolant and tyre tread and pressure on their cars before they get packed up.’

Trevor Reed, a transportation analyst at information supplier INRIX, said there would be a ‘record-level’ number of travellers hitting the roads this weekend.

‘Although travel times are expected to increase throughout the weekend, Friday afternoon will be the worst time to be on the road as commuters mix with holiday travellers,’ he said.

‘We’d urge motorists to check their vehicles on a regular basis and this week is really important because we know that many schools break up for summer and people are setting off on holidays and getaways. 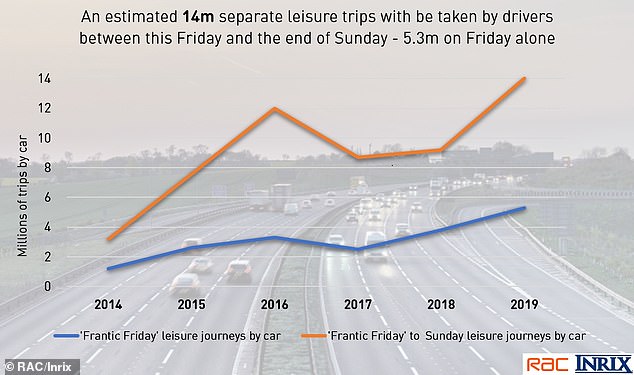 The figure for leisure trips this weekend is around four million more than the same weekend in 2018 and would represent the largest summer getaway since 2014, according to the analysis

‘By doing the correct checks before setting off, motorists can make sure they keep everyone moving which means everyone can reach their destination safely and on time.’

Summer travel plans are also under threat from possible strikes at Heathrow and Gatwick.

Yesterday talks aimed at averting the Heathrow strikes were adjourned until next week.

Around 4,000 workers, including security guards and engineers, are threatening to strike for seven days in a dispute over pay.

There are also threats of strikes by Unite workers at Gatwick and by Ryanair pilots in a move which would heavily affect Stansted.

Railway services are also disrupted in London this weekend, with large parts of the Underground and Overground shut down due to engineering work.

Officers cleared of wrongdoing after giving man VODKA before he died