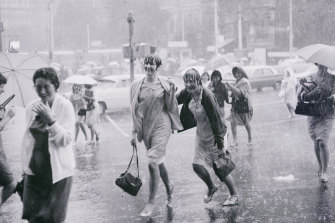 Soaked to the skin and past caring about the rain, these two girls splashed across Swanston Street to Flinders Street Station at the height of a torrential downpour,Credit:The Age Archives

Melbourne had widespread power failures in outer suburbs, major disruption of railways and road, with all exits to the city running awash.

Earlier, Geelong was battered by one of the heaviest downpours recorded in the city.

Melbourne's Footscray had a drenching 165 points of rain in 40 minutes soon after 4.30 p.m.

In the inner city, homeward bound shoppers and office workers were soaked when 70 points of rain poured down in half an hour.

Exits to the city were feet deep in water and scores of cars foundered in the widespread flash floods.

At the height of the thunder storm Melbourne Airport was closed for 45 minutes. 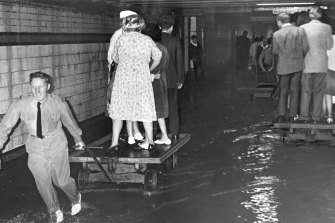 People were pulled along on railway trolleys to get through the flooding in the subway at Flinders Street station.Credit:The Age Archives

Serious delays on all suburban railway lines during the peak period occurred when:

Flooding on lines in western suburbs forced trains to move at a snail's pace, and

Lightning strikes closed a section of the Fern Tree Gully line at Heatherdale, and the railways had to run bus shuttle services between there and Lilydale.

Disruptions began with the deluge about 4.30 p m but most services were back to normal by 7.30 p.m.

Railway subways at both Spencer and Flinders streets were flooded to a depth of 18 inches when drains could not cope with the heavy rain shortly before 6 pm.

More determined commuters took off their shoes and socks, hitched up their garments and waded. 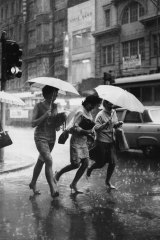 Three women run for cover on the corner of Swanston Street and Flinders Lane.Credit:The Age Archives

Two Royal Navy helicopters on a flight from Sydney were battered by the storm as they approached Laverton RAAF base over Port Phillip Bay.

Early In the storm lightning struck a three-storey building In Auburn Road, Hawthorn, dislodging a large slab of masonry which crashed on to the crowded footpath. No one was hurt.

Last-minute shoppers in Toorak Village were briefly stranded when Toorak Road turned into a swirling stream with flood waters lapping the footpaths on both sides of the street.

Police closed the road around Albert Park lake when It was cut by storm water in several places.

Poor visibility and slippery road surfaces caused a spate of minor road incidents, but there were no serious injuries.

At the height of the storm in inner Melbourne, drains on the roof of Capitol House blocked and water cascaded into crowded Howey Place.

Several shops in adjoining arcades were flooded, and water an inch deep swept through carpets and stock in a Collins Street shoe store.

Power was restored quickly to all areas except small sections of Sunshine and Altona which suffered major breakdowns.

In Geelong, flash flooding washed through the city centre during a storm which pounded the area for 20 minutes soon after 2.30 p.m.

More than an inch of rain fell, flooding city and suburban shops and low-lying homes.

Biscuit tins and other goods floated out of one delicatessen in Ryrie Street.

In a Moorabool Street men's wear store, water six inches deep caused damage to stock estimated by the owner at more than £2000.