Home » World News » From Wuhan to Paris to Milan, the search for ‘patient zero’

He did not frequent Wuhan’s Huanan seafood market, he would later tell World Health Organisation experts investigating COVID-19’s origin. He preferred the RT-Mart near his home on the eastern bank of the Yangtze River – a sleek, multistorey supermarket where magnetised escalator ramps sweep customers and their shopping carts from floor to floor. 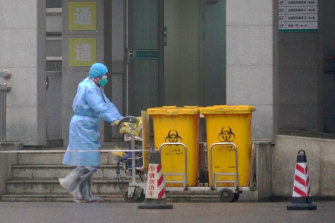 A staff member moves bio-waste containers past the entrance of the Wuhan Medical Treatment Centre in January 2020, the early days of the pandemic.Credit:AP

He hadn’t travelled outside Wuhan in the days before his illness. If someone caught coronavirus by crawling in a bat cave, it wasn’t him.

In the search for the pandemic’s origin, the trail officially ends with Patient S01, China’s first confirmed COVID-19 case, whose sparse details were outlined in the joint WHO-China report released in March. He was not a seafood vendor, bat hunter or lab scientist. He was an accountant surnamed Chen who shopped at a very large supermarket.

“We can actually say surprisingly little about the pandemic origin,” said Sergei Pond, a Temple University biology professor who has been analysing some of the earliest SARS-CoV-2 genetic sequences. “We are looking at very few sequences and trying to learn a lot about them.”

Even for S01, the most scrutinised patient, details are hazy. The WHO report lists a sample sequence ID for him, EPI_ISL_403928, that belongs to a different patient, a 61-year-old market worker who died of septic shock after falling ill on December 20, 2019, according to the official China National Center for Bioinformation database. 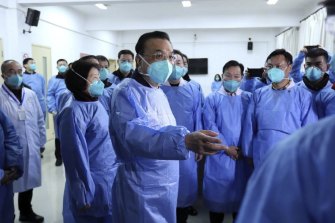 S01’s profile matches better with that of the 41-year-old whose coronavirus diagnosis at the end of December alarmed doctors – prompting one whistleblower, Li Wenliang, to leak the news on social media. But that patient is listed in the Chinese database as falling ill on December 16. A WHO spokesman said the UN agency is looking into the discrepancy.

That so little is confirmed is unsatisfying but not necessarily surprising. Despite intense desire to understand the pandemic’s source, it often takes years for scientists to establish the provenance and early infection path of a new disease. And China’s government hasn’t made it easier, limiting access to biological samples and original records, even to the WHO.

Researchers have collected a handful of clues – in places as far-flung as Milan and Paris – that hint at what might have happened in the days before Patient S01 fell ill. Some of the data points are uncertain or contradictory, and scientists caution that new information could surface that wipes the slate clean.

For now, this is the hazy picture emerging.

A population of samples

Three days before Patient S01’s symptoms began, on December 5, 2019, an oral swab was taken from a four-year-old boy outside of Milan who was suspected of having measles. Months later, it tested positive for coronavirus RNA. The case, outlined in the Emerging Infectious Diseases journal, is one of several European studies suggesting the virus may have circulated undetected overseas for weeks, even months.

Researchers in France say they found hints of the virus even earlier, in November. A team from France’s National Institute for Health and Medical Research and other institutes retrospectively examined over 9000 serum samples banked as part of a public health project from November 2019 through March 2020.

In their paper, Zins’ team acknowledged the possibility of false positives but said it was unlikely to be the case for all their positive results. 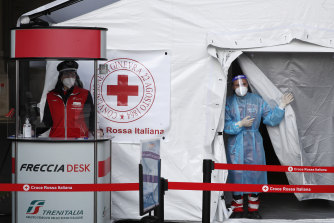 Then there is the most controversial study: In a paper published in November, researchers in Italy reported traces of the coronavirus in September 2019, declaring it may “reshape the history” of the pandemic. Scientists from the National Cancer Institute of Milan and the University of Siena analysed nearly 1000 blood samples collected in 2019 from a cancer-screening trial. They reported more than 10 per cent containing coronavirus antibodies, including samples from September 2019.

The result was striking enough for the WHO to request re-testing by a different laboratory, in the Netherlands. That re-testing process is now complete, but the lab declined to provide details and the WHO referred the matter back to the original Italian researchers.

An author of the original study, Giovanni Apolone, the scientific director of the National Cancer Institute of Milan, indicated there was some disagreement about how to interpret the re-test results, and said that his team was working on a new paper – one the Netherlands researchers “won’t be signing”.

“I can tell you from our viewpoint, the results are favourable to our original study but in a very complex scenario,” Apolone said.

Emanuele Montomoli, another co-author, theorised in an interview that they might have detected a “less transmissible” strain that could circulate without sparking a major outbreak.

Some doctors doubt the virus could have circulated unnoticed for so long, and say antibody tests can produce false positives.

Other research suggests small-scale earlier transmission was possible. In a paper published in Science magazine in April, scientists simulated a SARS-CoV-2 outbreak 1000 times and found it fizzled out more than two-thirds of the time. Joel Wertheim, an evolutionary biologist at the University of California San Diego involved in the study, said their team estimated the Wuhan outbreak began in November, but couldn’t rule out earlier isolated clusters.

Confirming how early patients were infected is difficult. Zins said the vast majority of those with antibodies in France had no confirmed links to China. One spent two months travelling through China but did not visit Wuhan.

Chinese officials have suggested that the virus was brought to Wuhan from abroad. This theory has found little support from scientists in other countries, partly because of the genetic similarity between SARS-CoV-2 and known bat coronaviruses from China’s south.

The Chinese embassy in Washington said in a statement that origin study must follow the science and “can only be a joint scientific study”.

“Any action that politicises origin-tracing poisons the atmosphere of scientific research, hampers global cooperation in this regard and undermines global efforts to fight the virus,” it said.

In Wuhan, official searches for patients preceding Patient S01 have been unsuccessful, despite the Chinese government’s boasts in recent years of its high-tech surveillance capabilities. In the WHO report, it said local hospitals checked dozens of early suspected cases and all were negative.

Wei Bing, a 32-year-old shop owner in Wuhan, says she doesn’t recall much out of the ordinary in the northern autumn of 2019. Wuhan hosted the Military World Games in October, an Olympics-like tournament for soldiers. The streets were extra clean, roadblocks erected around the Games sites.

“As a Wuhan resident, I was very proud,” she said.

Several scientific teams estimate the outbreak could have begun as early as October 2019. It would have been easy to miss the first cases: China was in the thick of its worst flu season in more than a decade. Official statistics show that by November 2019 there were five times the number of influenza cases across China compared to a year earlier. By December, it was ninefold.

Some US lawmakers are calling for an investigation into potential coronavirus infections at the Military World Games. It was only one of a string of international events in Wuhan that northern autumn, each a potential path for a virus to seep overseas. With 11 million people, Wuhan has more residents than New York City.

There were early rumours. One Wuhan resident, Stella Zhou, recalled that she heard talk of a mysterious pneumonia at a child-care centre on December 8, 2019, the same day Patient S01 fell ill and nearly a month before the official announcement. Another resident, Zhu Wei, said some early cases probably went undiagnosed.

“Everyone around me has the feeling that the real number was far higher than the official count,” Zhu said. “At first, there were many who didn’t have a chance to get tested or couldn’t get medical treatment.”

The WHO report mentions earlier suspected patients, but said they were not made available for interviews.

In their follow-up recommendations, the WHO experts called for a review of early blood samples from the Wuhan Blood Centre and medical records from the Military World Games. 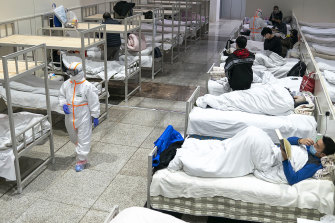 Patients diagnosed with the coronavirus settle at a temporary hospital set up in an exhibition centre in Wuhan on February 5, 2020.Credit:AP

The WHO did not reply to questions about whether these reviews took place. The Wuhan Blood Centre, and health authorities in Wuhan and Hubei province did not respond to requests for comment.

For most of 2020, the earliest case was believed to be a Wuhan resident who fell ill on December 1, 2019. This was revised in the WHO report: he was determined to have suffered other illness in early December, contracting the coronavirus later that month with his wife in a family cluster.

The revision turned the accountant surnamed Chen, with December 8, 2019 symptom onset, into the official first case.

By November 2019, the coronavirus had likely infected a small number of people in Wuhan, scientists say. The city bustled with activity, creating endless paths that a virus could travel.

On November 2, a handful of Italian exchange students sat down at bright blue desks at a Wuhan university to try their hand at Chinese calligraphy. The next week, 2000 people clad in “hanfu”, the flowing ancient Chinese robes, converged at the Yellow Crane Tower for a festival. Later in November, some 200,000 people, including visitors from 20 countries, toured an agricultural expo.

That month, a Chinese wildlife conservation scientist made a routine visit to the Huanan market he had tracked for two years and confirmed it was still selling wild animals in poor hygienic conditions, as his team later wrote in the Nature journal.

And on November 19, 2019, the Wuhan Institute of Virology held an annual staff safety training session. Deputy director of security Hu Qian discussed safety problems found during audits over the past year, according to a post on the institute’s website.

The institute did not respond to questions on what kind of safety lapses were found in the audits. Its leadership has vehemently denied having encountered SARS-CoV-2 before the pandemic or the occurrence of any lab leaks.

The WHO report called the theory of a lab leak starting the pandemic “extremely unlikely”. A number of scientists have since said they believed it remained a possibility, including Jesse Bloom, a computational biologist at the Fred Hutchinson Cancer Research Center in Seattle.

“The origins of SARS-CoV-2 remain unclear, with the two plausible theories being a natural zoonosis or a lab accident,” Bloom said.

The origin search has been hobbled by scarce early information, some of it unreliable or missing.

The online archives of two local state-run newspapers, the Hubei Daily and Chutian Metro Daily, can no longer be accessed before November 5, 2019, according to checks by The Washington Post. The newspapers’ publisher did not respond to a request for comment.

Bloom made waves last month when he announced that he recovered 13 early coronavirus genetic sequences that had been deleted from a database by researchers in Wuhan for unknown reasons.

“As scientists, we need to find ways to obtain more data about the earliest cases,” he said.

Pond, the Temple University professor, says Bloom’s paper underscored just how little data exists on the early days of the pandemic. Those recovered sequences fill some gaps in their reconstruction of how the virus evolved, strengthening the theory that the Huanan market wasn’t the sole source of the outbreak, he said.

“Even as few as 13 new sequences, which if you think about it is a tiny amount, can fairly substantially modify the understanding of the pandemic origin,” Pond said.

Australia’s Politics May Be Changing With Its Climate

Factbox: Women who could run the EU