CCTV footage, filmed yesterday morning, shows the moment the incident in the GSM phone shop in Adapazari district of Sakarya province in Turkey broke out.

In the clip, a 55-year-old customer named in reports as P.T. can be seen sitting with a worker in the shop when he suddenly gets to his feet and pulls out a gun.

One worker, named as Ahsen Demirci, 28, drops to her knees behind the till to hide from the gunman while another woman, not known to be a customer or employee, is also present.

All three appear startled and are pictured suddenly running to the back of the shop.

The man can be seen pulling a gun out of his pocket before aiming for Ahsen.

She ducks and can be seen at the bottom of the screen trying to seek cover.

As the gunman nears closer, a pair of legs from one of the other two individuals are seen sprawled out on the ground.

The man then cocks the gun, leans over the counter and appears to open fire on Ahsen.

The female employee can then be seen squirming on the ground as the shooter makes his way around to the office aiming the gun inside.

Local media reported Demirci was shot in the head in the incident and her colleague, Tugce Nur Yilmaz, 36, was shot in her stomach while in the back office. 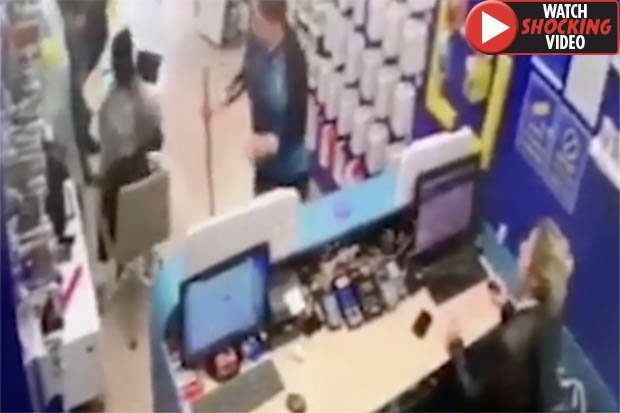 Both employees were seriously injured and taken to hospital for treatment while the suspect was arrested shortly after the incident.

He was detained and the gun allegedly used in the attack was seized.

The suspect reportedly told cops in a statement: “I did it due to instant rage.”

Local media report P.T. had been having an argument with Ahsen about his phone tariff being too high when he pulled the gun out.

There are no updates on the condition of the victims.

Family traumatised after girl, 10, who was 'happiness personified' dies suddenly in sleep