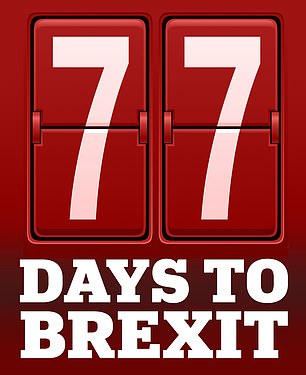 Rebel Tories were last night warned they would never be forgiven after they threatened to help Jeremy Corbyn into Downing Street to block a No Deal Brexit.

In an extraordinary move, backbencher Guto Bebb yesterday declared he would rather install the Labour leader as a caretaker prime minister than allow Boris Johnson to take the country out of the EU without an agreement.

‘A short-term Jeremy Corbyn government is less damaging than the generational damage that would be caused by a No Deal Brexit,’ the Tory MP told the BBC.

Meanwhile, three Tory former ministers yesterday agreed to meet the Labour leader to plot how they could work together to stop No Deal. 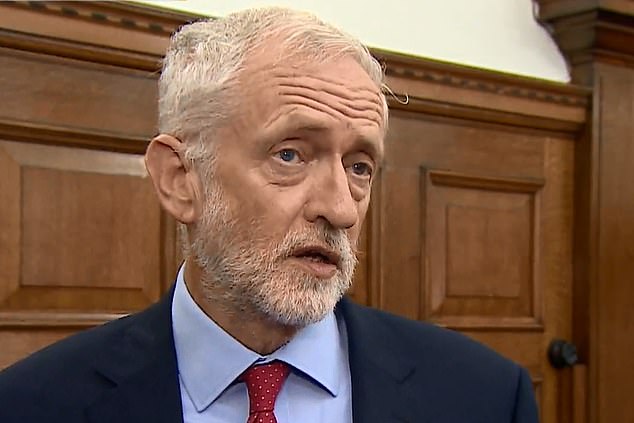 They responded positively to Mr Corbyn’s plan to stop No Deal, even though Liberal Democrat leader Jo Swinson rejected the idea, saying Mr Corbyn could not command the confidence of the Commons. 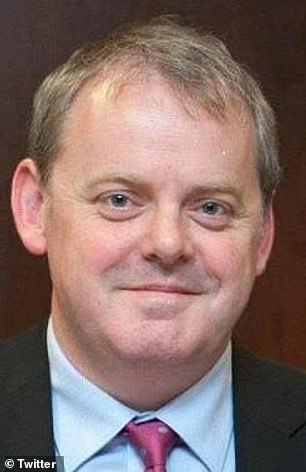 In an extraordinary move, backbencher Guto Bebb (pictured above) yesterday declared he would rather install the Labour leader as a caretaker prime minister than allow Boris Johnson to take the country out of the EU without an agreement

The Transport Secretary said: ‘It’s absolutely extraordinary that any Conservative MP considered even for one minute installing Jeremy Corbyn in Downing Street.

‘Jeremy Corbyn would wreck our economy, he would destroy jobs and the livelihoods, savings, I think he also can’t be trusted with security or crime.’

In an appeal to Tory MPs thinking about working with Mr Corbyn, Mr Shapps added: ‘I just say to them you know you really need to think very very carefully about installing Jeremy Corbyn in Downing Street. It absolutely cannot happen for the sake of this country.’

In a letter of reply to the Labour leader, the trio and ex-Tory MP Nick Boles, who now sits as an independent, wrote that they believed stopping the country leaving the EU without an agreement should be their ‘common priority’ as they agreed to meet in the coming weeks ‘to discuss the different ways that this might be achieved’. 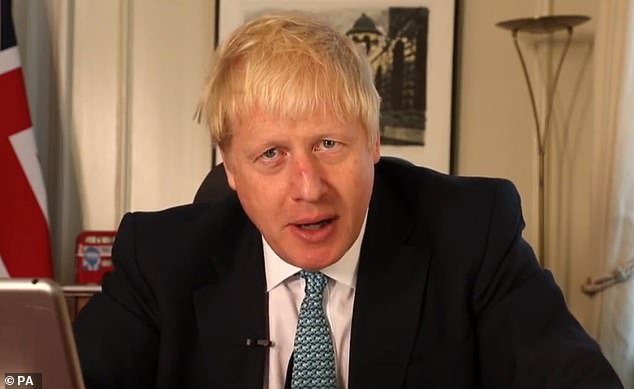 The situation is likely to come to a head next month as MPs opposed to No Deal try to stop Mr Johnson from taking Britain out of the EU on October 31 without an agreement. Mr Johnson is pictured above in Downing Street for a ‘People PMQs (Prime Minister’s Questions) this week

It followed Mr Corbyn’s extraordinary written plea on Wednesday night, to rebel Tories and opposition leaders, for support to help him into Downing Street to stop a No Deal Brexit.

He declared he was ready to collapse Boris Johnson’s government in a confidence vote and then lead a ‘strictly time limited’ government to extend Article 50. 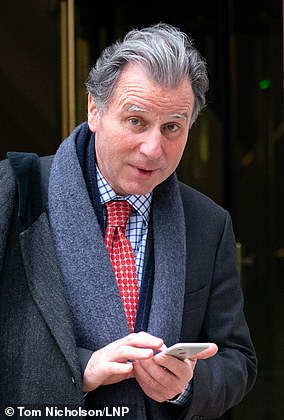 A memo from the time revealed he blamed the 1985 Broadwater Farm riots in North London, on the ‘bad moral attitudes’.

The Eton and Cambridge-educated MP for West Dorset, 63, joined the Cabinet as Chancellor of the Duchy of Lancaster under David Cameron.

A journalist once confronted him while he was wearing a toga at a party after it emerged he had put forward £20million of unplanned spending cuts.

He said he would then call a general election – at which Labour would campaign for a second referendum.

But there were no guarantees about how ‘time limited’ such a government might be, with Tories fearing that he would cling to No 10 indefinitely.

The Tory MP for Meriden in the West Midlands, 61, was criticised in 2008 for using her parliamentary allowance to pay her children’s former nanny.

She was made a dame in 2017 for political and public service, but has now joined forces with Labour MP Jack Dromey to ensure Britain leaves with a deal.

She also masterminded a letter to Theresa May calling on her to rule out the prospect of leaving the EU without a deal.

The situation is likely to come to a head next month as MPs opposed to No Deal try to stop Mr Johnson from taking Britain out of the EU on October 31 without an agreement.

Dame Caroline last night said that while she was happy to work with Mr Corbyn on options such as changing the law to block No Deal she would not vote to bring down the Government in a confidence vote.

Mr Grieve said he believed it was ‘unlikely’ Mr Corbyn would succeed in becoming a caretaker prime minister.

He added: ‘But he has written a letter in which he sets out his desire to prevent a No Deal Brexit and on that I am in agreement with him because it is something that is going to have such a catastrophic impact.’

Backbencher Michael Fabricant said: ‘It is remarkable that given that the Lib Dems think this offer from Jeremy Corbyn is a big joke, some of my colleagues are taking it seriously. As a former government whip, I hope that their action will not be forgotten.’

Former minister Greg Hands added: ‘Corbyn only became Labour leader because his MPs didn’t think it could actually happen. Now he could become Prime Minister because a Conservative MP makes the same mistake.’

Jon Conway, a member of Mr Grieve’s local Tory association in Beaconsfield who has been leading efforts to remove him, said that it was wrong for him to be fighting Mr Johnson’s Brexit pledge just weeks after the Prime Minister won the overwhelming support of the party membership.

He said: ‘People in the constituency are appalled that he still claims to represent us.’ 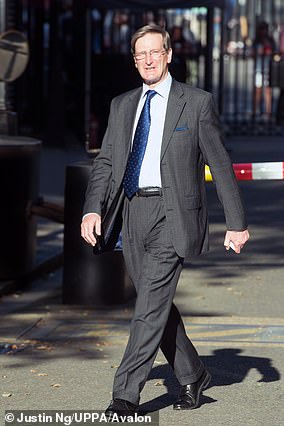 The former attorney general Dominic Grieve is one of the most vocal opponents of Brexit to be found in the Commons.

He is the President of the Franco-British Society and a fluent French speaker whose maternal family is French.

The Tory MP for Beaconsfield, 63, is also a QC and has sought a legislative route to oppose Brexit, claiming it will bring chaos to the UK.

He has previously tabled a number of Commons amendments to try to prevent the UK leaving the EU. He is facing the threat of deselection by his local party.

Mr Grieve was sacked from the Cabinet by David Cameron in 2014, claiming this was because of his support for the European Court of Human Rights.

He has been outspoken in his opposition to Boris Johnson and his adviser Dominic Cummings, whom he branded ‘arrogant’.

LEO McKINSTRY: This lofty clique will do anything to obstruct democracy

Boris Johnson caused a stir this week with what some felt was incendiary language when he denounced the ‘terrible collaboration’ between the EU and the anti-Brexiteers.

But inflammatory though the phrase may be, the sentiment behind it is understandable.

The fanatical gang of Tory Remainer rebels, led by the ‘other Dominic’ in the Brexit saga – Grieve rather than Johnson’s right-hand man Cummings – have just signalled their willingness to work with Labour leader Jeremy Corbyn in an attempt to thwart a No Deal Brexit. 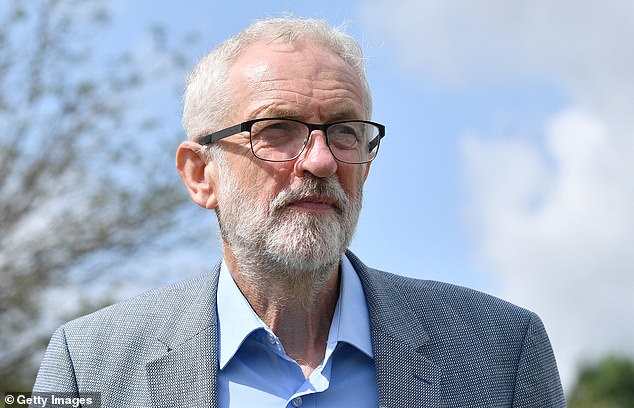 The pro-Corbyn manoeuvre is just the latest in a pattern of conduct designed to bring mayhem to the Brexit process through endless procedural wrangling in Parliament, particularly through the use of wrecking amendments

It is hard to imagine a greater betrayal of their own party and of British democracy than this shameful move by Grieve’s group, whose number also includes former minister Oliver Letwin, ex-Tory chairman Caroline Spelman and semi-detached Grantham MP Nick Boles.

In their eagerness to undermine Johnson’s Government, they are willing to consider installing in Downing Street a Marxist agitator whose entire political outlook is the very antithesis of Conservatism.

Corbyn is not fit to be a school caretaker, never mind a caretaker premier, yet this is the role that the zealous Tory Europhiles seem to be contemplating for him.

Showing more sense than Grieve’s gang, the Liberal Democrats have dismissed Corbyn’s proposal that he should form ‘a time-limited government’ to secure another delay in Brexit and a general election.

The Liberal Democrat leader, Jo Swinson, rightly argued yesterday that not only is Corbyn too widely despised at Westminster to command a Commons majority, but also he is too extreme to be prime minister. 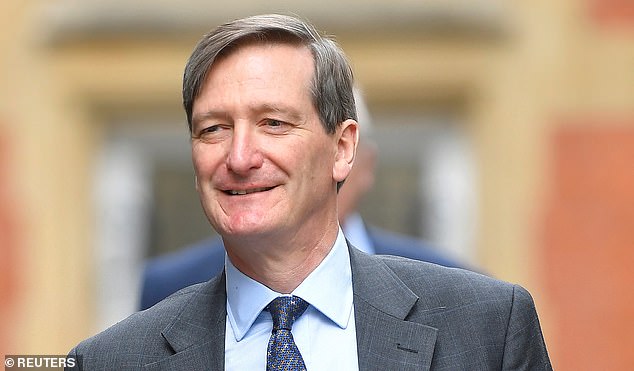 Grieve once described himself as ‘a bit of an old-fashioned Conservative’, but in reality he is the smug voice of the modern pro-EU Establishment which, behind all the lawyerly courtesy, has nothing but contempt for the referendum decision

But such concerns seem lost on Grieve and his fellow Tory pro-EU diehards, who wrote to Corbyn to tell him they ‘should be happy to meet with you’ to discuss ‘our common priority’ of defeating a No Deal Brexit. In its obsequiousness, this letter illustrates the depths of ideological fervour to which Grieve & Co have sunk.

Support for a hard-Left revolutionary, who sympathises with terrorism and wants to overthrow capitalism, should never be part of any Conservative MP’s activity.

Yet, within the Grieve clique, worship of Brussels has warped their judgment, destroyed their moral compass, obliterated their party loyalty and shows utter disdain for the people they serve.

The pro-Corbyn manoeuvre is just the latest in a pattern of conduct designed to bring mayhem to the Brexit process through endless procedural wrangling in Parliament, particularly through the use of wrecking amendments.

Spelman, an unimpressive former minister, has co-operated tirelessly with Labour MP Jack Dromey to undermine the Government, as have Letwin – who has gone from Thatcherite loyalist to serial trouble-maker – and Boles, whose anti-Brexit posturing led to a fall-out with his local constituency association. 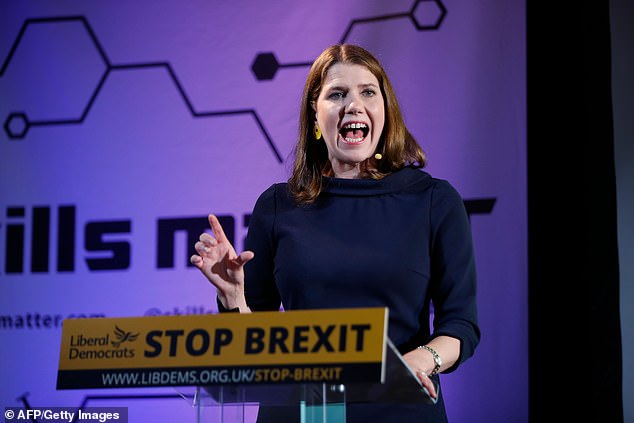 The Liberal Democrat leader, Jo Swinson, rightly argued yesterday that not only is Corbyn too widely despised at Westminster to command a Commons majority, but also he is too extreme to be prime minister

But by far the biggest figure is Grieve himself, the barrister and former attorney general who has appointed himself the keeper of the holy flame for the Remain cause.

Grieve once described himself as ‘a bit of an old-fashioned Conservative’, but in reality he is the smug voice of the modern pro-EU Establishment which, behind all the lawyerly courtesy, has nothing but contempt for the referendum decision.

That is why he has spent the past three years dreaming up ever more complex plots to block the will of the people.

Astonishingly, this is the same Dominic Grieve who, in the 2017 general election, declared that ‘the decision in the referendum must be respected’.

He justifies his U-turn by saying he is putting Britain’s national interests first, but what could do more damage to our country than the advent of a Corbyn government?

Grieve, who was awarded the Legion d’Honneur for his services to British-Franco relations – is often lauded for his cleverness. But his apparent faith in Corbyn’s good intentions seems dangerously misplaced.

The lesson from history is that once revolutionaries seize power, they rarely let go without conflict.

Grieve’s antics have already alienated a large section of his constituency association in Beaconsfield, where he recently lost a vote of confidence. He has vowed, however, to ‘continue as before’.

And that is the problem. The zealous Remainer stance, which has now descended into collusion with Corbyn, will only provoke further disillusion.

Beaconsfield was once the home of the great 19th century prime minister Benjamin Disraeli, one of the architects of democratic Conservatism.