Washington: G. Gordon Liddy, the undercover operative whose bungling of the Watergate break-in triggered the gravest constitutional crisis in American history and led to the resignation of President Richard M. Nixon, died March 30 at his daughter’s home in Mount Vernon, Virginia. He was 90.

His son Thomas Liddy confirmed the death but did not give a cause, saying only that it was unrelated to COVID-19. 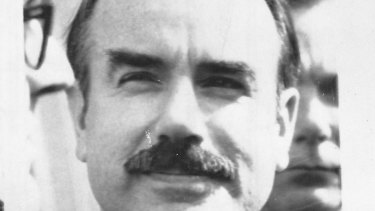 Gordon Liddy convicted for his part in the Watergate cover-up of the Nixon administration.Credit:UPI

The role for which he is best remembered was in the plot to bug the Democratic Party headquarters in the Watergate complex in June 1972.

Liddy’s combination of can-do ruthlessness, loyalty to Nixon and ends-justify-the-means philosophy made him a natural fit in a White House determined to get even with its political enemies.

At the same time, he was viewed by his superiors as “a little nuts,” in Nixon’s phrase. “I mean, he just isn’t well screwed on, is he?” the president complained to chief of staff H.R. Haldeman a week after the break-in. 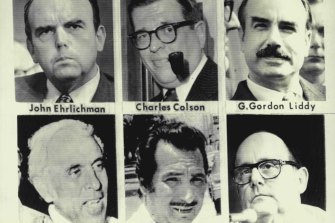 With his intense stare, cannonball head, bristling moustache and machine-gun style of speaking, Liddy looked like the archetypal bad guys he later depicted in television shows including Miami Vice. His friend and fellow Watergate conspirator, the late Howard Hunt, described him as “a wired, wisecracking extrovert who seemed as if he might be a candidate for decaffeinated coffee.”

Liddy often boasted of his transformation “from a puny, fearful boy to a strong, fearless man” through a regime of intense exercise and physical bravado such as eating rats and holding his hand over a candle until the flesh burned.

“The trick is not minding,” he once explained of the pain, echoing a line used by Peter O’Toole in the 1962 movie Lawrence of Arabia.

He also developed a fascination early on with Nazi Germany, saying that he felt an “electric current” surge through his body when he listened to Hitler on the radio. To the young Liddy, the führer embodied the “power of will.”

Although Liddy frequently boasted of his impeccable tradecraft, he made a series of elementary mistakes that allowed his former FBI colleagues to connect the break-in to the White House and ultimately to a small circle of aides around Nixon himself.

He accepted personal responsibility for the fiasco, declaring that he was “the captain of the ship when she hit the reef.”

“If someone wants to shoot me, just tell me what corner to stand on, and I will be there,” he told presidential counsel John Dean.

Detractors viewed the gun-loving, hippy-hating Liddy as a threat to American democracy and the man responsible for many of the so-called dirty tricks of the Nixon administration that led to the resignation of the president on August 9, 1974. 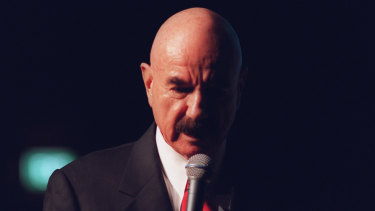 Gordon Liddy was a public speaker, among other professions, in later life.Credit:Fairfax

Supporters admired his war against “radicals” and “subversives” and his refusal to betray his fellow Watergate conspirators in return for a reduced prison term.

The director of the nonprofit National Security Archive, Tom Blanton, said Liddy “brought out the worst” in Nixon and his aides, “raising the testosterone level in the White House and ratcheting them up to even more extreme action.”

Desperate to contain the scandal during the run-up to the 1972 election, Nixon’s aides launched a coverup with the personal approval and involvement of the president. Liddy refused to cooperate with prosecutors and Congress, and was sentenced in March 1973 to a 20-year prison term for conspiracy, burglary and illegal wiretapping.

President Jimmy Carter commuted Liddy’s sentence in 1977 and he was released after 52 months behind bars.

By his own account, the Liddy of the Watergate break-in was a product of the culture wars of the 1960s.

“The nation was at war not only externally in Vietnam but internally,” he said in his 1980 autobiography Will, which sold more than 1 million copies.

“I had learned long ago the maxims of Cicero that ‘laws are inoperative in war’ and that ‘the good of the people is the chief law.’ “

Birx predicts coronavirus toll will fall ‘dramatically’ by end of May