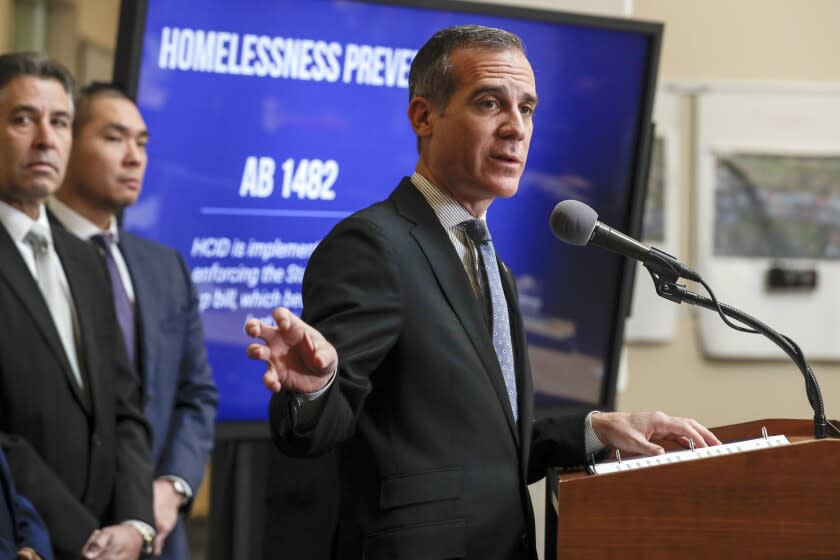 Days after facing criticism for being photographed maskless at Sunday's Rams-49ers playoff game, Los Angeles Mayor Eric Garcetti has offered an explanation: He was holding his breath.

"I think we should focus on what's real," Garcetti said at a SoFi Stadium news conference Wednesday. "I wore my mask the entire game. And when people ask for a photograph, I hold my breath."

"There's a 0% chance of infection from that," Garcetti added.

Photos surfaced Sunday of Garcetti and others at the Inglewood stadium, where attendees are required to wear masks to help protect against coronavirus transmission.

Magic Johnson shared images of several politicians — including Garcetti, Gov. Gavin Newsom and San Francisco Mayor London Breed — who were all photographed with him without masks. Garcetti could be seen holding his mask in his hand, however, in the photo posted by Johnson.

Garcetti was also seen on the field at SoFi Stadium without a mask in images posted on his official Twitter account.

Images from the Rams Fancam, a website where stadium crowd shots are posted, showed Garcetti wearing a mask as he watched the game from his seat. He sat next to one of his appointees — Airport Commissioner Sean Burton — who wasn't wearing a mask. Several other men in the group with Burton and Garcetti are also seen maskless.

Burton didn't immediately respond to a request for comment.

This isn't the first time the mayor has been observed maskless at a Rams game. Garcetti posed with a group of dignitaries at Sofi in September 2021 in another photo posted by Johnson.

Garcetti appeared Wednesday with other officials at the stadium to talk about safety precautions ahead of the Feb. 13 Super Bowl.

"I'll continue wearing my mask at every game and I've been proud to be at every single game. It's funny, on the way out I had friends who said, 'You seem like the only guy who was wearing the mask the entire game,'" Garcetti said.

The mask requirement for outdoor stadiums, under an order issued in L.A. County last August, was criticized as unnecessary this week by county Supervisor Kathryn Barger after photos emerged of many fans maskless.