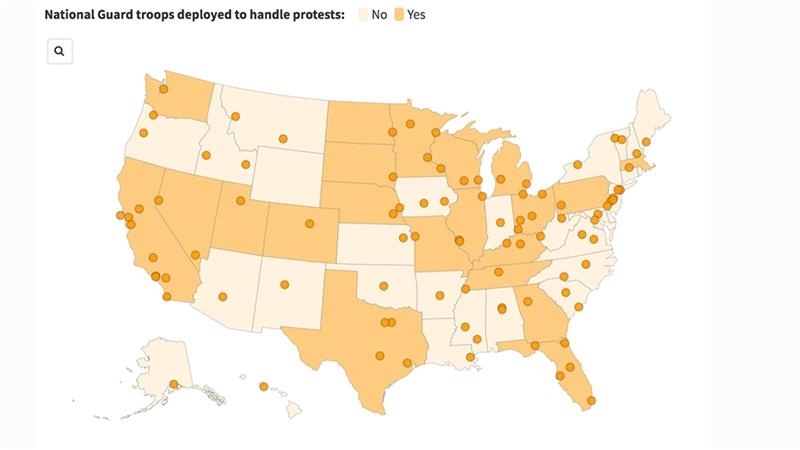 Tensions spiked outside the White House on Sunday, the scene of days of demonstrations amid unrest across the United States against police killings of black people.

The entire Washington, DC National Guard – roughly 1,700 soldiers – was called in to help control the protests. The city of Boston also deployed troops on its streets.

Tens of thousands of reserve soldiers have been put at the ready across the United States.

“As of Sunday, National Guard Soldiers and Airmen were activated in 24 states and the District of Columbia in response to civil disturbances, bringing the total number of Guard members on duty in support of their governors to nearly 62,000,” the guard announced in a statement.

“State and local law enforcement agencies remain responsible for security. The National Guard personnel assigned to these missions are trained, equipped and prepared to assist law enforcement authorities with protecting lives and property of citizens in their state.”

With cities wounded by days of violent unrest, the United States headed into a new week with neighbourhoods in shambles, urban streets on lockdown and shaken confidence about when leaders would find the answers to control the mayhem amid unrelenting raw emotion over police killings of black people.

Sunday capped a tumultuous weekend and month that saw city and state officials deploy thousands of National Guard soldiers, enact strict curfews and shut down mass transit systems. Even with those efforts, many demonstrations erupted into violence as protesters hurled rocks and Molotov cocktails at police in Philadelphia, set a fire near the White House and were hit with tear gas and pepper spray in Austin and several other cities. Seven Boston police officers were hospitalised.

In some cities, thieves smashed their way into stores and ran off with as much as they could carry, leaving shop owners – many of them just ramping up their business again after coronavirus pandemic lockdowns – to clean up their shattered storefronts.

In others, police tried to calm tensions by kneeling in solidarity with demonstrators, while still maintaining a strong presence for security.

At least 4,400 people have been arrested over days of protests, according to a tally compiled by The Associated Press. Arrests ranged from stealing and blocking highways to breaking curfew.

The demonstrations were sparked by the death of George Floyd, a black man who pleaded for air as an officer pressed a knee into his neck.

Floyd’s death in Minneapolis came after tensions had already flared after two white men were arrested in May for the February shooting death of black jogger Ahmaud Arbery in Georgia, and the Louisville police shooting death of Breonna Taylor in her home in March, which also attracted national attention in May.

“They keep killing our people. I’m so sick and tired of it,” said Mahira Louis, 15, who was at a Boston protest with her mother on Sunday, leading chants of “George Floyd, say his name“.

Tensions rose on Sunday outside the White House, the scene of three days of demonstrations, where police fired tear gas and stun grenades into a crowd of more than 1,000 chanting protesters across the street in Lafayette Park.

The crowd ran, piling up road signs and plastic barriers to light a raging fire in a nearby street. Some pulled an American flag from a building and threw it into the blaze.

A building in the park with toilets and a maintenance office went up in flames. As demonstrations persisted past curfew, Washington police said they were responding to multiple fires lit around the capital. 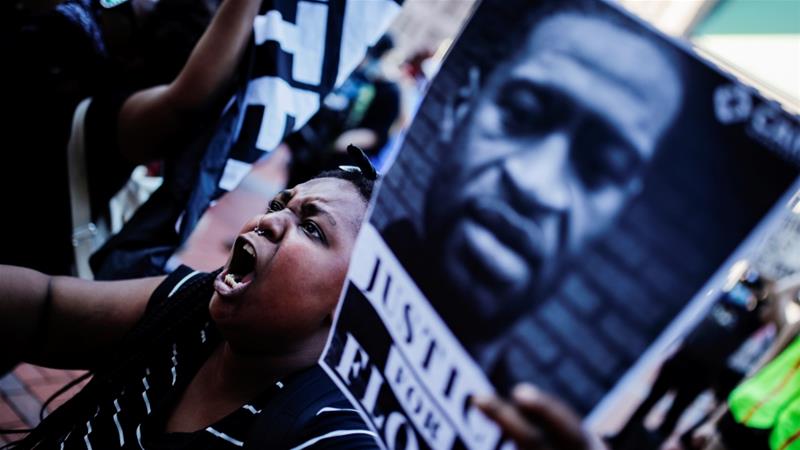 How can racism, police brutality in the US be brought to an end?

Prison guard, 26, ‘had baby with convicted murderer who killed dad of three’