The switch to ‘greener’ petrol is fuelling soaring prices at the pumps which could overtake the all-time record within days, the RAC warned yesterday.

The rising cost of filling up will pile pressure on Rishi Sunak not to increase fuel duty in next week’s Budget – the levy has been frozen at 57.95p per litre for 11 years.

The RAC said filling up would be cheaper if E5 had not been replaced by ‘greener’ E10 as the standard fuel last month, and stressed that ‘greedy retailers fleecing motorists’ was also a factor in the soaring prices.

But a Government spokesman dismissed the idea that the higher content of costly ethanol in E10 had pushed up prices. 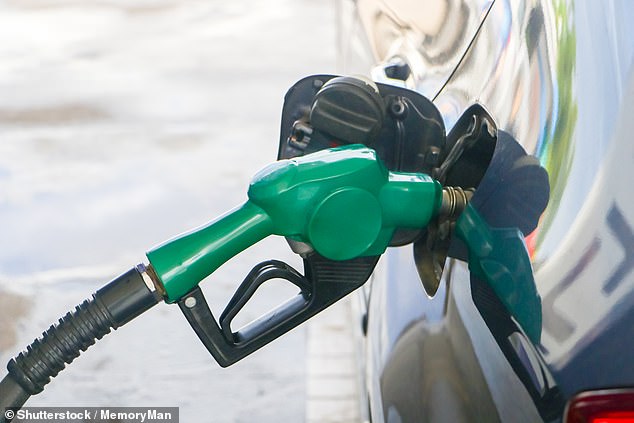 The RAC said filling up would be cheaper if E5 had not been replaced by ‘greener’ E10 as the standard fuel last month, and stressed that ‘greedy retailers fleecing motorists’ was also a factor in the soaring prices

The wholesale price of ethanol has surged more than 50 per cent since August 31, the day before E10 started being rolled out at forecourts.

The RAC stressed that the biggest factors in surging pump prices were the soaring cost of oil and greedy retailers fleecing motorists.

Separate analysis by the AA showed profit margins for forecourts are now on average about 12p per litre, up from 10p over the summer.

The RAC’s fuel spokesman, Simon Williams, said: ‘The average price of petrol sadly seems to be on an unavoidable journey to a new record high.

‘While the hike at the pumps has primarily been driven by the price of oil doubling in 12 months, other factors are also combining to make matters even worse.

‘The bioethanol component of unleaded has increased from 5 per cent to 10 per cent with the introduction of E10 in September and unfortunately that costs even more than petrol on the wholesale market.

‘Retailers are also taking a bigger cut on petrol than they normally do, which is a further blow to drivers.’ 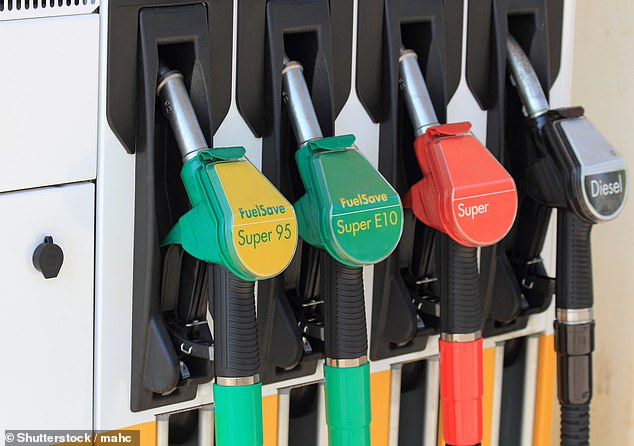 The wholesale price of ethanol has surged more than 50 per cent since August 31, the day before E10 started being rolled out at forecourts

He also called on the government to temporarily reduce VAT on fuel at next week’s budget to help hard-pressed motorists.

He said this would be more effective than slashing fuel duty, as there is a danger this would not be passed on in full by retailers at the pumps.

Luke Bosdet, the AA’s fuel supremo, said: ‘The average price of petrol is knocking on the door of the record set in 2012, which is putting enormous financial pressure on UK families with cars.

‘Unfortunately, retailers are wanting to have their cake and eat it by artificially increasing prices, like they did last year when the price of oil crashed, but didn’t pass on the savings.’

The roll-out of E10 began on September 1 as part of the government’s aim of reaching net-zero emissions by 2050.

It is considered ‘greener’ because it is blended with 10 per cent bioethanol – double the amount used in E5 – which is also made from materials such as crops and waste wood.

E10 is around 1.6 per cent less efficient than E5, meaning drivers have to buy more E10 to complete the same distances, adding to annual fuel bills.

It is also not compatible with up to 700,000 older cars, meaning these drivers have to splash out on more costly super unleaded. Average pump prices for this were around 152.91p per litre yesterday.

Transport Secretary Grant Shapps hailed the launch of E10, saying it will ‘reduce greenhouse gas emissions as we accelerate towards a greener transport future.’

Brian Madderson, chairman of the Petrol Retailers Association, which represents independent forecourts, said profit margins had to be increased to re-coup losses made during the pandemic, when traffic on the roads and demand for fuel plummeted.

He said: ‘We have got to have a sustainable business going forward, so what used to be an acceptable margin is no longer and has to be increased.

‘We’re still only talking about 86 per cent of pre-pandemic sales volumes currently, which in terms of lost margins is still pretty brutal.’

A Government spokesperson said: ‘It’s wrong to suggest fuel prices have been influenced by the introduction of biofuels. Fuel costs are mainly driven by the volatility of wholesale markets – just as with any commodity.

‘Analysis shows that introducing E10 has little to no impact on pump price increases, and will help reduce annual CO2 emissions by around 5 million tonnes per year.’

Coronavirus: Majority of UBCO classes to move online this fall