Singapore: When British Prime Minister Boris Johnson told parliament in London last week that Indonesia was bringing forward its target to phase out coal to 2040, it surprised climate change watchers in Jakarta.

After all, the south-east Asian nation is the 11th biggest consumer of the fossil fuel, the world’s leading exporter of thermal coal and is, with Chinese financing, continuing to build new coal-fired power plants until 2023.

Coal is loaded onto a barge in Kutai Kartanegara, East Kalimantan.Credit:Bloomberg

Previously, Indonesia had set 2056 as the year it would retire the last plants as part of its mission to reach net-zero emissions by 2060 or sooner.

Johnson, though, had been told the news directly by President Joko Widodo, known as Jokowi, and it was confirmed at the United Nations Climate Change Conference in Glasgow this week.

Highly susceptible to the effects of climate change, from rising sea levels, floods and landslides to threats on food security, Indonesia used the gathering of world leaders to declare it was seeking to wean itself off coal in a partnership with the Asian Development Bank and the Philippines, another in the top 30 global burners of coal for electricity.

It was the key takeaway of an appearance in Scotland by Joko laced with statesmanlike ambition, although not all was exactly as it seemed.

By the end of the week Indonesia had apparently turned its back on a multilateral agreement to end deforestation by 2030 that had been announced in Glasgow. 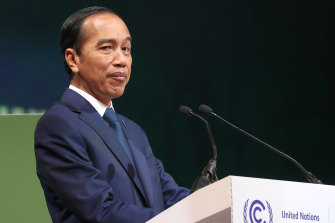 The new goal on coal also comes with a significant caveat. It will cost a bomb and Indonesia can’t afford to pay for it.

A recent government study reported that even to achieve net-zero by 2060, Indonesia would need to invest $US200 billion ($A270 billion) a year for the next decade and an average of up to $US1.6 trillion ($2.1 trillion) per year in the three decades afterwards.

Other countries in the region also have problem financing the transition to renewables but as Indonesia assumes the G20 presidency for the next year, Joko is calling for international assistance to allow it to “contribute more to reach net zero”.

“The question is how much developed countries are willing to contribute and what kinds of technology transfers can be made,” he said in Glasgow.

Joko’s point woman on raising the money is Finance Minister Sri Mulyani Indrawat, an Indonesian economist whose standing is such that she was formerly managing director of the World Bank.

But there is great scepticism about whether getting out of coal by 2040 is realistic and how its newly flagged aspirations fit with Joko’s major focus on infrastructure.

“It’s a very, very big number that we have to come up with in order to retire coal,” said Professor Jatna Supriatna, the chairman of the Research Centre for Climate Change at the University of Indonesia.

“It’s going to be very costly until 2030 unless someone pays for it.”

He said Indonesia had many renewable energy options at its disposal including tapping it from the ocean floor, geothermal and biomass energy and hydrogen “but it really needs investment”.

“This commitment seems like an empty promise. Indonesia is still building coal-fired power plants,” he said. “I think they’re just using these energy issues to make sure there is a new form of investment.”

But while Indonesia joined more than 40 countries in Glasgow in agreeing to phase out coal-fired power, it cast doubt on another key international pledge. 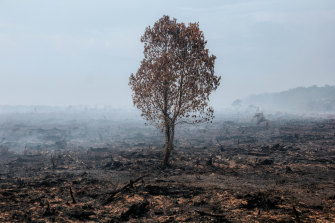 One tree remains after prolonged draught triggered a fire in rainforests in Aceh. Credit:Getty

Indonesia, home to a third of the world’s rainforests, was one of more than 100 signatories to a pact to end deforestation by 2030, but Indonesian ministers said later such a timeline was never agreed when leaders met in Glasgow.

“The massive development of President Jokowi’s era must not stop in the name of carbon emissions or in the name of deforestation,” said Indonesia Environment Minister Siti Nurbaya Bakar on social media.

She said that “forcing Indonesia to zero deforestation in 2030 is clearly inappropriate and unfair” while Indonesia’s Deputy Foreign Affairs Minister, Mahendra Siregar, said the statement released by the United Kingdom on a zero deforestation agreement was “clearly erroneous and misleading”.

“Although Indonesia is willing to engage on forest management at the global level to address climate change, it is important to move beyond mere narrative, rhetoric, arbitrary targets and sound bites,” he said.

Global Forest Watch reports it has lost 10 per cent of its forests since 2001, although the pace of the destruction has slowed under Joko. He placed a moratorium on permits for new palm oil plantations in 2018 and his government says deforestation is at its lowest level in 20 years, with forest fires down 82 per cent in the last year.

Indonesia is the world’s number one palm oil producer and deforestation represents 60 per cent of its total emissions.

Get weekday updates on the climate summit that will shape our future. Sign up to our COP26 newsletter here. 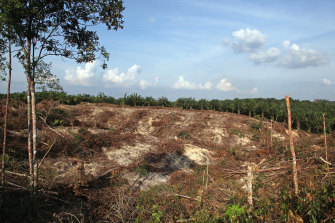 A view of cleared land designated for a palm oil plantation in Pelalawan, Riau province.Credit:Bloomberg