It’s a snake-eat-snake world! Grim X-ray shows python INSIDE stomach of water moccasin that hunted and ate the rival serpent in the Florida Everglades

A water moccasin snake ate a Burmese python in the Florida Everglades and Zoo Miami has the photographic proof: An X-ray of the python inside the stomach of his serpent rival.

The shocking X-Ray shows the interior of the snake’s belly, and in the center, the spine of a large python can be seen with the tracking transmitter the zoo implanted on the serpent.

‘You may have heard in the news about the bobcat that was documented stealing and consuming eggs from an invasive Burmese python in the Everglades,’ the zoo wrote in a Facebook post.

‘But that isn’t the only native species that is fighting back! A python that had its tracking transmitter implanted by surgeons at Zoo Miami was recently found to be consumed by another snake; a native cottonmouth, also known as the water moccasin.’ 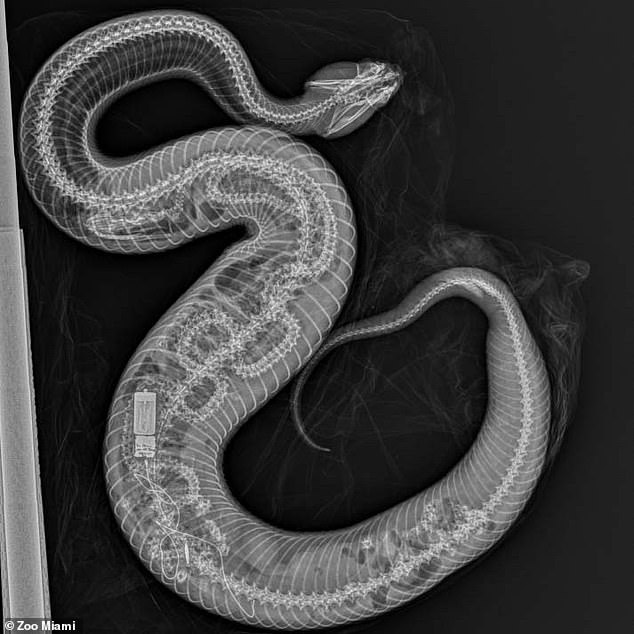 An X-ray of a Florida Everglades cottonmouth snake reveals the serpent devoured a python, with its spine and tracking device visible inside the predator’s belly 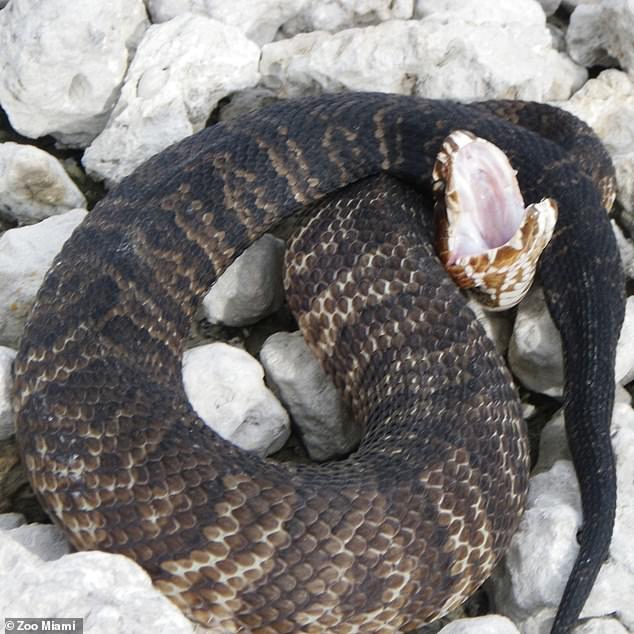 According to Florida researchers who made the discovery, the python devoured was a youngling from a group the scientist had been previously observing.

The young python had a tracking device installed on it in August 2020, and released back into its habitat.

By May 2021, the snake researchers saw the tracking signal was relatively weak and when they went to investigate, they came across a cottonmouth snake ‘with an obvious food bolus’ – a bulge that indicated it had recently eaten a large meal.

By the following month, the scientists confirmed the shocking predation, and the predator was quickly released back into the wild to avoid stressing the animal.

The snake eventually expelled the tracking device devoured from its prey after 25 days.

Scientists said the devouring shows evidence that the native cottonmouth snake has expanded its diet to include the invasive pythons, which would ultimately have minor ecological impacts as the Florida snakes thrive.

Burmese pythons have devastated the Everglades’ natural ecosystem after the animals were released into the area, likely by pet owners who’d grown fed-up of them.

The conditions are perfect for them to thrive in, and the apex predators have since stripped the area of many of its native mammals, birds and other forms of wildlife.

Large-scale hunting operations are now underway to try and remove the pythons from the area once and for all.

Around The OHL: Contenders, Pretenders, and World Junior Memorie