Spain has reported 3594 new coronavirus infections in 24 hours as it struggles to contain a second wave of contagion that hit a peak of some 8000 cases last Friday.

The country has registered the largest number of cases in western Europe since the pandemic began six months ago and the biggest resurgence after lifting one of the continent's strictest lockdowns against the spread of COVID-19. 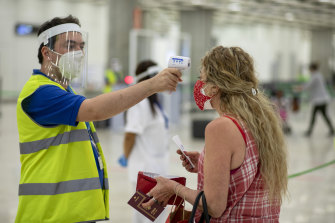 A woman has her temperature taken at Adolfo Suarez Madrid-Barajas Airport in Madrid, Spain. Credit:Getty Images

The latest daily increase, reported on Wednesday, was below the roughly 4000 cases recorded a day earlier, according to updated health ministry data, and brought the cumulative total to 419,849. Seven more deaths were recorded, pushing the overall toll to 28,971.

Accounting for 1513 cases, the Madrid capital region was by far the hardest hit region. Separate data from regional authorities showed several municipalities with more than 700 cases per 100,000 people – more than seven times the national average for the past week.

While officials have advised residents in some areas to stay at home, the Madrid region's deputy leader said there were no plans to request a localised state of emergency under new powers granted by the central government.

"Generally speaking I'm not in favour of more lockdowns, of repeating the steps from March and April … That ended in economic ruin," Ignacio Aguado said.

He also hit out at the central government's lack of a strategy to safely reopen schools, accusing the education ministry of leaving local authorities to fend for themselves.

In the absence of national guidelines, Spain's 17 regions have been left to develop their own plans, frustrating parents and teachers and prompting students to call for three days of strikes in September.

"We're here to demand that the ministry of education does something, because we're pulling our hair out here to see they've done absolutely nothing over the past five months," student union leader Coral Latorre told state broadcaster TVE.

Norway said on Wednesday it will impose a 10-day quarantine on all people arriving from Germany and Liechtenstein from August 29 due to rising numbers of COVID-19 cases in those countries.

Similar restrictions will also be imposed on those coming from two additional regions in Sweden, the Norwegian foreign ministry said in a statement.

To try to prevent a domestic resurgence of the coronavirus, Norway quarantines all travellers from countries with more than 20 confirmed new COVID-19 cases per 100,000 population during the past two weeks.

It also advises Norwegians against travelling to those nations.

With its latest additions, Norway will be restricting travel from most European countries, including France, Britain, Spain, Poland and Switzerland.

It still allows quarantine-free travel from EU countries Italy, Slovenia, Hungary, Slovakia, Finland and the Baltic states as well as some parts of Denmark and Sweden. 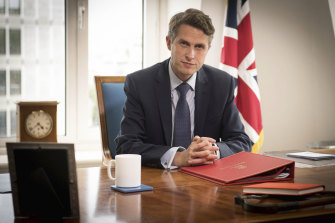 On a school visit in central England, Johnson told students: "The risk to your health is not from COVID…the greatest risk you face now is of continuing to be out of school," he said.

Head teachers in other areas will also have the discretion to recommend using masks in their schools for students aged between 11 and 18.

It is the latest U-turn by Johnson's government which has come under fire for its handling of the pandemic and after a debacle this month when an algorithm-based system saw swathes of pupils awarded lower-than-expected exam grades.

The mayor of Moscow invited residents on Wednesday to join trials of a coronavirus vaccine that Russia approved for use earlier this month in what officials described as a breakthrough on par with the Soviet Union's launch of the world's first satellite in 1957.

The world's first vaccine against the coronavirus to receive a government go-ahead has caused unease among international medical experts, who called Russia's fast-tracked approval and failure to share any data supporting claims of the vaccine's efficacy a major breach of scientific protocol.

Scientists around the world say any widely used vaccine should first be tested in advanced trials involving tens of thousands of people to prove it is safe and effective before being licensed.

In his invitation to the Russian capital's residents, Moscow Mayor Sergei Sobyanin appeared to announce those kind of broad studies would be launched soon. He said the "post-registration research" will last six months and involve 40,000 people.

Sobyanin encouraged Moscow residents to sign up, arguing that the vaccine was based on long-time previous research and proven to be safe.

"We all were eager to see the creation of a vaccine, and now we have it," Sobyanin said. "Now, Moscow residents have a unique chance to become the main participants in clinical research that will help defeat the coronavirus."

Get our Coronavirus Update newsletter for the day’s crucial developments and the numbers you need to know. Sign up to The Sydney Morning Herald’s newsletter here and The Age’s here.

Qatari royal 'held against his will in the UAE'