Home » World News » ‘He was very good at looking after people’

When Trevor Burgess died in his sleep in Melbourne on June 7 aged 105, he was not Victoria’s oldest man, but he wasn’t far off.

Trevor was for five years the oldest member of the Melbourne Cricket Club and was a minor celebrity in the streets and shops of Yarraville, Bulleen and Kooyong – where he lived for much of his life. Chinese people would regularly stop him in the street and touch him for good luck. Trevor was a life member of the Yarraville Club, which he joined in 1940.

Trevor’s great age and good health led to periodic misunderstandings. Aged 101, he tried to rent a car when his car went for repairs, and the rent-a-car company’s computer system couldn’t make sense of his age. The manager had to manually change it and personally authorise the rental (which he did). Two years later, when Trevor went to hospital for a blood transfusion, the hospital’s computer system insisted he must be three years old, not 103.

Trevor Burgess was born in Tasmania in 1916, as World War I raged in Europe. It was the year of the Gallipoli campaign and the battles of the Somme and Fromelles. Woodrow Wilson was the US president, the British Sopwith Camel made its maiden flight and cars were in their infancy.

Immediately following the war, during the Depression, Trevor’s family – father Basil, mother Ida and their seven children – left Tasmania and settled at Wagara, 10 kilometres from Orbost, in eastern Victoria. Their home was a wooden hut with bark sheeting and clay floors. Trevor and his brothers and sisters attended the local school while their father took work where he could get it. The family later moved to Moe and then to Gould on the Tyers River.

From an early age, Trevor had a keen appreciation of right and wrong, once fighting a local kid who had harassed his brother. “It was a real bare-knuckle stoush and eventually he gave up,” Trevor recalled. The kid, Jack O’Toole, would later win more than 120 wood-chopping titles, including 26 world championships.

Trevor left school aged 14 to join his father working to support the family. They chopped wood in the forests of Gippsland, cutting railway sleepers with broad axes – mainly ironbark and redgum – for which they received three shillings a sleeper. They worked on the slopes of Mount Baw Baw, north of Moe, before the 1939 bushfires decimated the Victorian alps. They left the house on a Monday morning, walked 10 miles to the site, worked for five days – camping at night – and walked home at the week’s end.

The family moved to Erica and Moondarra, as well as Nowa Nowa near Lakes Entrance. Trevor worked in the coal mines at Yallourn and drove trucks at Mildura.

During World War II, Trevor joined the RAAF, training as a cylinder and ignition systems specialist in Sale, and after the war learnt carpentry at the Footscray Institute of Technology. In 1940 he met Edna Lloyd at a dance at the Trocadero in Barkly Street, Footscray. Despite thinking he was a bit of a larrikin, they married the following year and enjoyed 72 years together, producing three sons – Tony, Kim and Fabian.

Trevor’s love of both the bush and wood led him to his next job – supervising a mill to harvest the mighty trees, mainly mountain ash, that had died in the 1939 fires. He built houses in Footscray, Ivanhoe and Bulleen, and worked on several others.

He then worked for 24 years at Jennings Industries, the home builder, running its mills to produce timber for its home-building operations. For several years he was managing director of Jennings’ milling operations in Tasmania and was heavily involved in developing a company program to look after sick and injured employees.

In the early 1960s, Trevor became chairman of the Mansfield section of the Victorian Forestry Industry Association, building logging roads near the Howqua and Jamieson rivers near Mansfield with local identity Jack Lovick. One day they were surprised to see Prince Charles hiking along the river during his stint at nearby Timbertop school.

Trevor later bought a plot at Sawmill Settlement, at the base of Mount Buller, and holidayed there with his family for more than 30 years, chopping wood, extending the house and fishing for trout in the nearby Delatite River.

When Trevor retired, he continued to fish, and took to lawn bowls and making stained-glass windows – producing hundreds of the latter for his children’s houses and various clubs, including the Auburn Heights Bowls Club in Kew. Later, aged 90, he learnt bridge.

Trevor was a passionate Footscray supporter, witnessing the club’s two grand final wins, in 1954 and 2016, at his beloved Melbourne Cricket Ground. 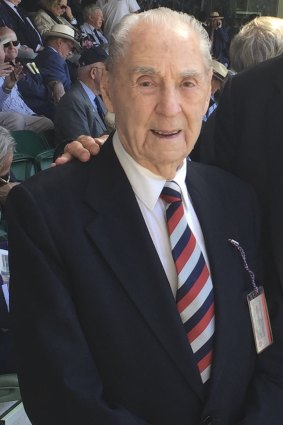 Trevor Burgess at the 2019 MCG Boxing Day Test on his 102nd birthday.

Trevor was extremely proud of his three sons: Tony, a biochemist who in 1998 received a Companion of the Order of Australia for his work in cancer research; Kim, who studied biochemistry before becoming a long-haul pilot at Qantas; and Fabian, a respected ophthalmologist.

Tony Burgess says: “Although my father did not finish secondary school, he and my mother understood the importance of education and they worked hard to make sure we received a good education. He always set an example of honesty and fairness, then let us explore the world. He never interfered or tried to push us in any direction. He was a quiet man who had total respect for, and the respect of, his employees. He was very good at looking after people.”

Richard Allen is a friend of the Burgess family.