Britain is set to bask in temperatures reaching 81F as a 700 mile-wide Atlantic ‘hot air blob’ brings with it 12 days of sizzling sunshine from today.

Revellers are expected to once again descend upon the nation’s sun-soaked outdoor spaces as the country prepares for a week of balmy weather and scattered sunshine as a hot plume from Spain and the Azores brings with it an oncoming heatwave.

Forecasters have predicted rising mercury levels, which are expected to last into the bank holiday weekend,  could also see temperatures climb to a sizzling 80F in the north west of the country while the south of England, which is due to be hit by daily temperatures 75F through the week, could also see peaks of 77F.

Temperatures of 7FF could also sweep across Wales as the warm sunny spells continue to soar as the school holidays draw to a close.

The scorching spell could see the nation exceed the temperatures seen across the Mediterranean and beat the 75F expected in Genoa, Italy, this week.

It comes just days after Britain was battered by torrential downpours and thunderstorms which saw the Met Office issue a yellow weather warning. 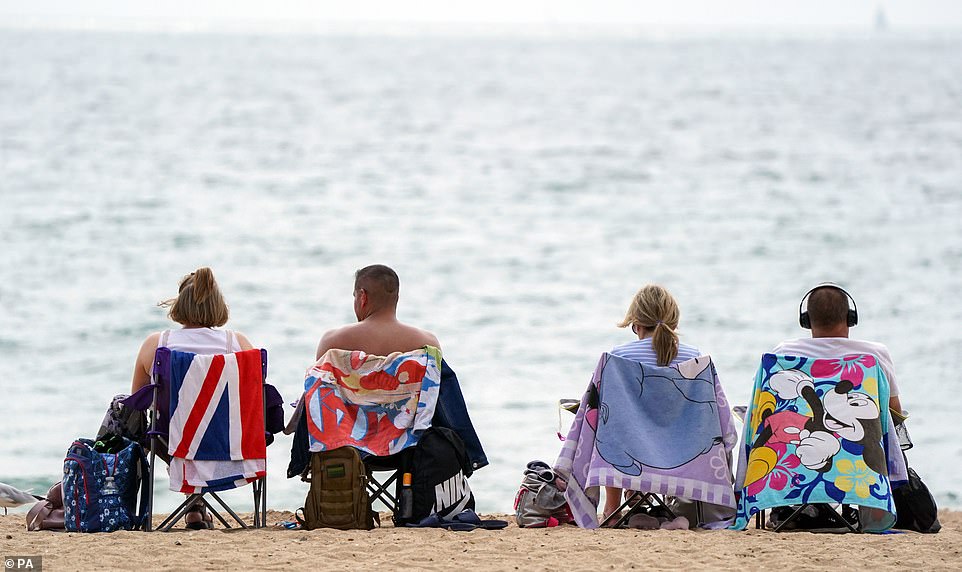 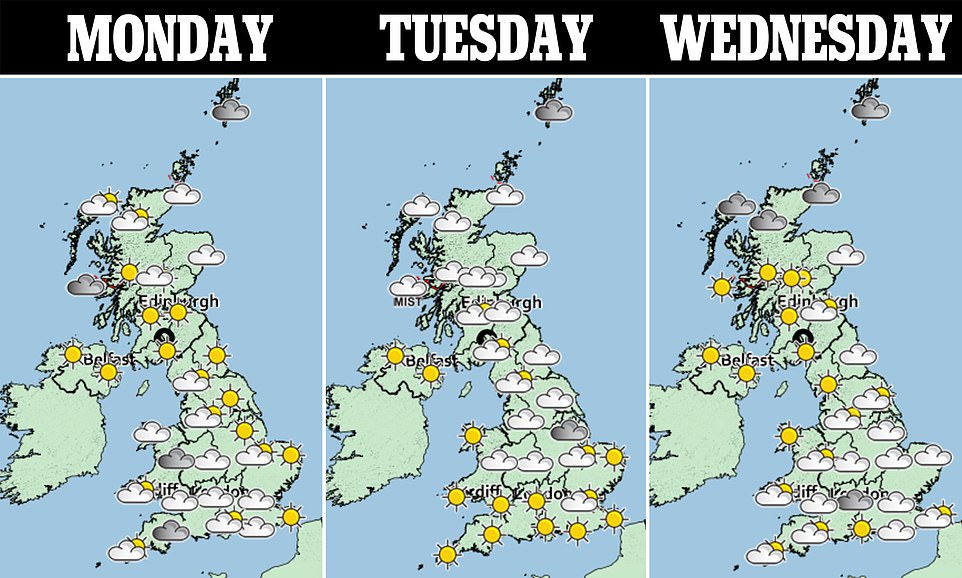 The Weather Outlook forecaster Brian Gaze said: ‘It should be the best spell of school holidays and feel pleasantly warm.

‘It’s a major change after wet weather. There should be a good deal of sunshine.’

Meanwhile former BBC and Met Office forecaster John Hammond said: ‘It will be late summer at its best, with a sunnier finale to a dull August

‘The mid-20s is possible by midweek, with the fine weather holding on for the Bank Holiday weekend and for a few more days into September for most.’

A Met Office forecaster said: ‘From Monday will be mainly fine and dry, with rather warm temperatures in the West initially and more widely later in the last week of August and into September.

‘There will be increasing amounts of sunshine, with high pressure likely to dominate, with settled conditions.’

Last week Britain was lashed by heavy downpours which saw around 20mm of rain fall in one hour and forecasters also warned of flooding across some areas, including Cornwall which was battered by heavy rain and stormy weather.

It came amid unsettled weather which has persisted across the UK throughout August, with the weather service also naming its first storm of the summer – Storm Evert – last month.

Met Office meteorologist Simon Partridge said the City of London has had 117 per cent of its usual August rainfall already.

The summer downpours has seen 60mm of rain fall on the capital up to August 17, compared with 51mm usually seen over the entire month. 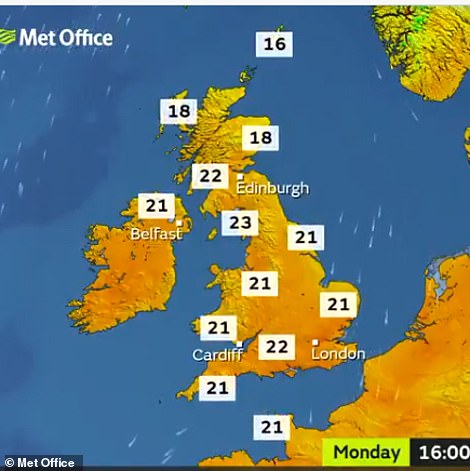 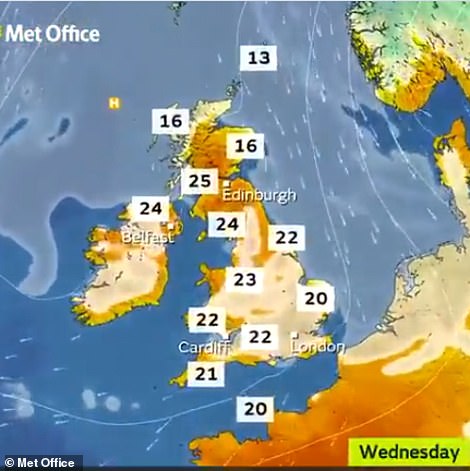 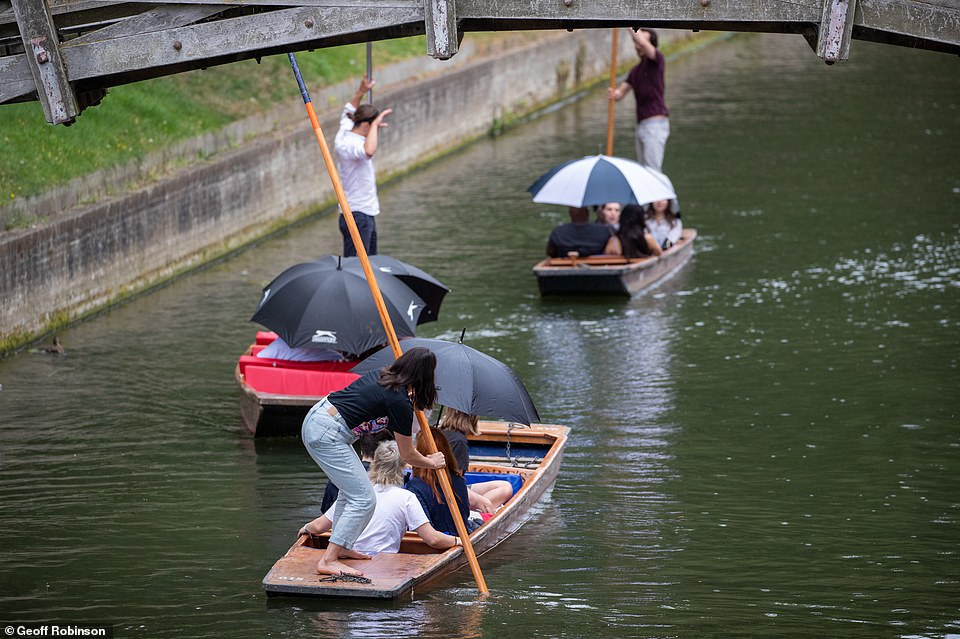 Northern Ireland has recorded 90mm of rain, which is a massive 90 per cent of its 97mm average for the month.

As the rain continued, one forecaster admitted a heatwave was not on the cards, but urged Brits ‘not to give up hope altogether’ with some September’s having come up trumps over recent years.

Elsewhere a spokesperson for the National Farmers’ Union said this year’s harvest was delayed due to cold spring temperatures.

They said: ‘The localised heavy rain and hail has caused significant problems in certain areas.

‘It’s a mixed picture because for many areas they just haven’t had many clear dry days in a row to harvest, so things have been a bit ‘stop-start’ with harvesting.

‘A heatwave is not on the cards – but let’s not give up hope altogether. Some September’s have come up trumps over recent years.’

Meanwhile, Coral bookmakers were offering odds of 6-4 for this month to be a record wet August.

The firm’s John Hill said: ‘This summer has already been one of the wettest in recent memory and with more rain on the way, by the time it is up, it may be the wettest we have ever had.

‘Rainfall has been forecast to arrive in many parts of the UK over the weekend and as a result, the odds suggest there is a strong chance this month will end as a record wet August.’

In July, the UK recorded the hottest day of the year so far with temperatures exceeding 86F in both England and Wales.

In England, 88.88F was recorded in Heathrow while Wales recorded 86.36F in Cardiff.

Payday lender QuickQuid pulls out of the UK