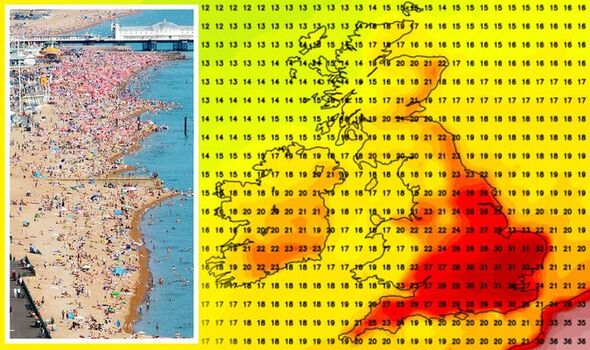 Warmer than average conditions threaten to hold out until the end of October, according to the Met Office’s latest long-range outlook. Government meteorologists blame warming coastal waters, climate change, and the return of high pressure–the driver for last month’s heatwave.

The alert comes as forecasters warn hot weather will return this week with the mercury to hit the mid-30Cs before mid-month.

A spokesman said: “It will be locally hot in the southeast during Tuesday and Wednesday with some notably warm nights and the potential for thresholds to be met in parts of East Anglia.”

Government forecasters warn it is twice as likely compared to average years that the next three months will be warmer than normal.

Substantial rain, especially across the drought-stricken south, through the coming weeks is unlikely, according to the Met Office. 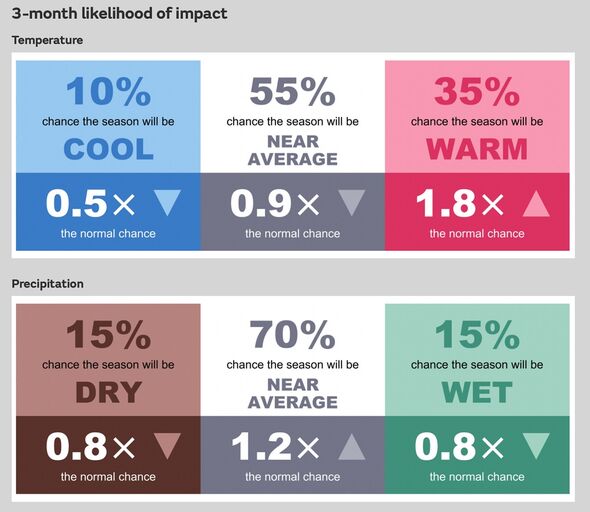 A spokesman said: “The main signals for August are for high pressure to extend northeast towards the UK at ties, with lower pressure to the south.

“With warmer than average sea-surface temperatures in the vicinity of the UK, the chances of a warn August to October are almost twice normal.

“Given these trends, there is a slightly increased likelihood of impacts from hot weather during August, especially given the dry conditions of the past few months.”

Temperatures across southern Britain will nudge 30C today before hitting 32C tomorrow, while Scotland and the north stays cooler with the chance of rain.

Warmth and humidity will grip the south through much of the week before everywhere turns cooler at the weekend, according to the Met Office. 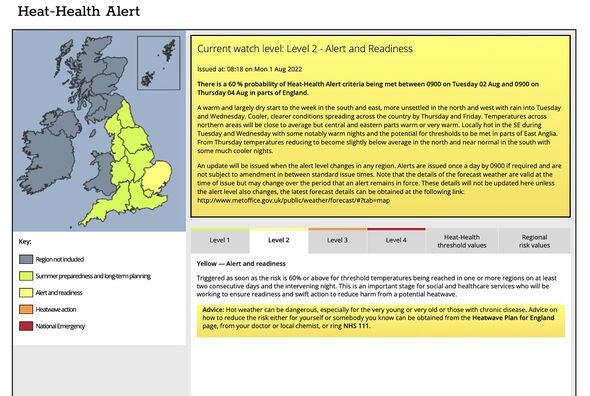 Meteorologist Aidan McGivern said: “South-westerly winds will be bringing a humid feel to Tuesday, and hot sunshine will prevail in London and the southeast where temperatures cold hit 30C.

“On Wednesday, it stays very warm and humid with cooler conditions further north and there will be scattered showers.

“On Thursday, there will be some sunshine across southern and eastern parts of the country and scattered showers into northern England and more especially into Scotland.”

High pressure will build into the weekend, but a low to the north will pull in colder air pushing temperatures down, he added.

He said: “On the whole high pressure is moving in and this has been a familiar theme through the shower and after those outbreaks of rain over the next few days much of the country will see drier, brighter and somewhat cooler weather this weekend.”

Long-range forecasters, however, warn the next extreme heatwave is just around the corner with the mercury to rocket in the run up to mid-month.

Exacta Weather forecaster James Madden said: “Another major spell of hot weather is possible during August, and this would bring a potential super-heatwave to end the summer off with a bang.

“Temperatures are likely to rise towards the end of the first week of the month and in the run up to mid-month.”

Jim Dale, meteorologist for British Weather Services, and author of Weather Or Not? added: “There is the potential for temperatures to rise into the mid-30Cs next week.

“This will depend on high pressure, and it is always going to be the influence of the Azores High at this time of year which brings us to the territory of very hot weather.” 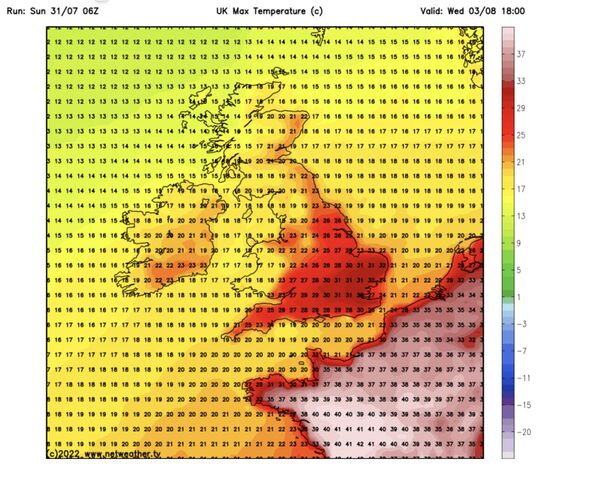 A separate Met Office report this week confirmed that last month was the driest July for almost 90 years.

Again, the lack of rain was driven by high pressure pushing back the influence of the Atlantic and allowing temperatures to surge.

Dr Mark McCarthy, of the National Climate Information Centre, said: “July 2022 has been a significantly dry month for Southern England.

“The dominant weather pattern for the month has only allowed interludes of rain into northern areas of the UK, with areas further south largely getting any rainfall from isolated and fleeting showers in a month that will ultimately be remembered for extreme heat.”

Alberta Budget 2020: Short-term rentals to be taxed 4% like hotels already are