Nick Svenson is growing a supposed wonder crop that suffers from a major image problem.

But the part-time farmer has high hopes for his second hemp harvest after sowing the crop just three months ago at his Mirboo farm in South Gippsland. 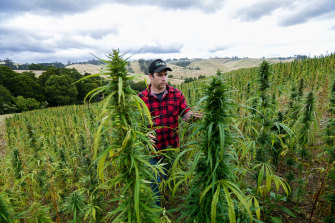 While the cultivation and production of hemp is big business in Europe, Canada and China – where it’s used for everything from breakfast cereal to construction materials – its potential is vastly unappreciated in Australia.

“A lot of people don’t believe it’s this miracle plant and you can do all this stuff with it,” Mr Svenson said. “It’s hard to swallow, especially given it was illegal.”

Proponents of the fast-growing plant say unnecessary regulation and its incorrect association with recreational drug use have hampered the industry’s growth in Australia.

Hemp comes from the same cannabis plant family as marijuana but contains only trace levels of the psychoactive tetrahydrocannabinol (THC) substance, rendering it useless for getting high. 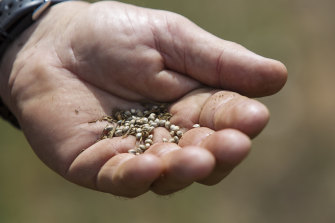 Australia was among the last countries worldwide to legalise hemp food products, with concerns about its interference with roadside drug tests, which were eventually dismissed, delaying its approval until 2017.

Mr Svenson works as an electrician at a paper mill and hopes to move into farming full-time by growing and selling hemp in addition to wheat, barley and beef.

He said the local climate was well-suited to hemp.

“I don’t have irrigation here but because it’s quite wet I can get away with it.”

In Victoria growers must pay a licence application fee, which costs about $440 and must be renewed every three years. 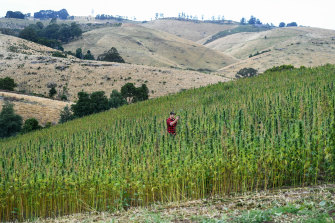 But Ms Stephenson said one year she also had to pay $417 for Agriculture Victoria workers to take samples from her crop and another $275 for them to be tested for THC.

“You don’t need a licence to grow barley or wheat or oats,” she said.

“We’re really excited about what the future of hemp looks like in Victoria and about being a potential industry leader,” she said.

In 2019, the state government established an industrial hemp taskforce to investigate the potential and challenges facing the industry.

Its interim report said hemp could be used for food and drink, fabric, carpets, denim, canvas, rope and paper, as well as fibreglass and cement substitutes, mulch and compost.

“There still is a stigma around hemp, which is really unfortunate because it is such a splendid plant,” she said.

The Australian Industrial Hemp Alliance president, who also runs niche marketing company Dr Hemp, said while people’s perceptions about hemp were changing, there was still a lot of misinformation.

“There is obviously confusion between hemp and recreational cannabis,” he said. “People will ask us if they will get high from drinking a hemp smoothie or eating a hemp cookie.”

He said education was key to overcoming these misconceptions.

But Mr Vosper thinks the word has an important history and it would be disingenuous to hide its origin.

While hemp and medicinal cannabis are distinct industries, there is some crossover.

ECS Botanics managing director Alex Keach said while the company’s medicinal cannabis crops were grown on top-secret sites away from its industrial hemp crops, there were similarities in how the plants were grown.

“It’s all cannabis at the end of the day,” he said. “But it’s what you use it for and how it expresses itself.”

Fight between passenger and driver causes bus to fall off bridge