A number of trees, some more than 100 years old, have been removed from the entrance to Caulfield Racecourse after a Christmas Eve amendment by the Planning Minister overruled controls on a $570 million development of the area.

Residents and community groups were shocked to see the trees cut down this week after Planning Minister Richard Wynne approved the amendment, overriding local council and heritage planning controls and removing any right of objection. 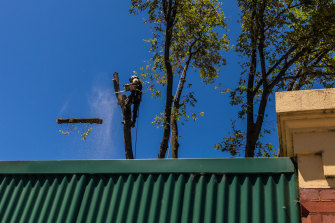 Trees at the entrance to Caufield Racecourse are cut down on Thursday following a Christmas Eve intervention by the planning minister. Credit:Scott McNaughton

Almost 70 trees will be removed under the redevelopment plan. One of the trees facing destruction on Friday is an Aleppo pine grown from the seed of Gallipoli’s Lone Pine.

Melbourne Racing Club member Anthony Del Monaco was disappointed the trees were cut down without consultation. He said he was concerned about the preservation of heritage buildings in the precinct.

“Because it has gone through the state government there are no public plans released, even the council don’t have the plans,” he said.

“It is hard to know what trees are going and what buildings are going. It’s fair enough that there is a redevelopment. It’s just a matter of whether there were other options which would have involved retaining the trees and heritage buildings.” 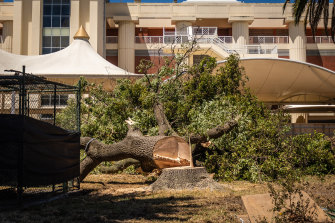 Heritage trees were cut down with chainsaws on Thursday. Credit:Scott McNaughton

The work is part of a $570 million redevelopment that will transform the racecourse into a sporting and entertainment precinct more than 10 times the size of the Melbourne Cricket Ground with a large concert space, indoor sport complex and up to seven sporting fields within the perimeter of the racetrack.

The explanatory report for the planning amendment stated it was required because the redevelopment would deliver “significant public benefit” through investment and improvement to a state-significant sporting and entertainment precinct and immediate benefits to Victoria’s economy.

No notice was given to the community of the amendment.

Anne Kilpatrick, of volunteer organisation Glen Eira Historical Society, said the elm trees were more than 100 years old and majestic in their own right, as well as being a significant part of the history of the area. 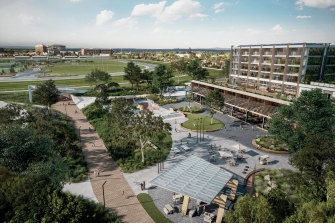 Plans for the redevelopment of Caulfield Racecourse with night racing, walking and cycling trails, restaurants and affordable housing.

“We are very concerned about this major threat to history and heritage of the racecourse, which has been assessed as being of state significance, although, until now, no one seems to have sought state heritage protection for it,” she said. “It currently has no heritage protection.”

Andrew Paxton, general manager of the Caulfield Racecourse Reserve Trust, said the trust was not consulted on the planning scheme amendment.

“Taking the approval process out of the hands of the appropriate local planning authority [the council] will put greed before heritage, and remove any public participation in what is, or could be, an incredible community asset,” he said.

A spokesman for the Melbourne Racing Club said the trees were being removed so that work could start on the Caulfield Masterplan, which was first announced in 2019.

“As part of the works, some of the 66 trees on site will be removed or relocated,” he said. “Seventy-three new trees will be planted as part of the upgrade work, which includes access and public realm improvements for users of the reserve.”

The spokesman would not say how many trees were being removed rather than relocated, but said the completed masterplan would provide a net gain of 31 trees on site.

A spokeswoman for the Victorian government said after the trees were removed at Caulfield Racecourse, Heritage Victoria received a nomination for an interim protection order for the precinct.

“It is currently considering this nomination,” the spokeswoman said. “Under the Heritage Act, anyone can nominate an area or object to the Heritage Register. The matter is then independently assessed by the Heritage Council,” she said.