People with high blood pressure or diabetes who catch Covid-19 are more likely to develop potentially fatal brain complications, a study has shown.

Researchers in the US looked at a small group of infected hospital patients who had been given a brain scan because of their concerning neurological symptoms.

Half of the patients with life-threatening problems, such as bleeding in the brain or a stroke, had diabetes. Seven in 10 had high blood pressure.

Both health conditions — largely a result of obesity — have already shown to be risk factors for severe coronavirus.

Covid-19 can restrict blood vessels in many of most seriously unwell patients, while also causing blood to clot more easily. This could lead to fatal brain problems.

Diabetes and hypertension patients are already more at risk of these problems. Their blood vessels can become more narrow as a result of their disease. 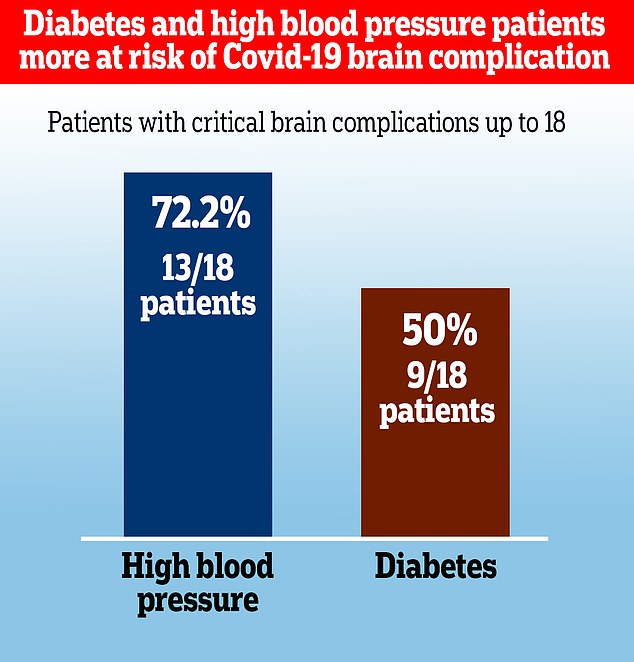 Half of Covid-19 patients with life-threatening brain problems, such as bleeding in the brain or a stroke, had diabetes. Seven in 10 had high blood pressure

Covid is classified as a respiratory disease, causing pneumonia and ARDS – a type of respiratory failure – in the most critically unwell patients.

However, the virus that causes Covid-19 has also been shown to cause problems in other organs — such as the brain, heart and kidneys.

At least one in every 100 Covid-19 patients admitted to hospital will suffer a stroke, research has shown.

Scientists led by the University of Pennsylvania said they wanted to investigate the brain complications further.

The study offered an explanation as to why some patients may be more at risk of these complications than others.

Markers of inflammation, such as proteins in the blood, were higher in those with critical brain scan results.

Dr Freeman said: ‘When your body is in an inflammatory state, it produces all these molecules called cytokines to help recruit the immune system to perform its function.

The findings suggest those with underlying ill health, caused by diabetes for example, are more prone to this overactive immune response.

Patients who have high blood pressure or diabetes are already more at risk of stroke, according to the NHS.

Blood vessels can be damaged by the effects of high blood glucose levels in people with diabetes, while high pressure can cause blood vessels to become narrow, rupture or leak.

These weaknesses could make it easier for Covid-19 to cause complications.

Scientists say complications such as stroke may be a byproduct of the way Covid-19 invades the human body.

Professor Ian Jones, a virologist at the University of Reading, told MailOnline: ‘Covid binds to an enzyme called ACE2 which is on the surface of the cell.

‘It simply uses it as a way of attaching itself but in doing so the enzyme function of ACE2 is reduced.

‘The consequence of this is an imbalance of hormones called Angiotensin I and Angiotensin II which together regulate blood pressure.

‘It could be related to the increase in strokes reported.’

ACE2 is present in all people but the quantity can vary among individuals.

Some evidence suggests that ACE2 may be higher in patients with hypertension, diabetes and coronary heart disease.

‘While complications in the brain are rare, they are an increasingly reported and potentially devastating consequence of Covid-19 infection.’

Dr Freeman and colleagues looked at 81 Covid-19 patients who underwent head CT and/or MRI scans between January and April.

Patients had been sent for brain scans typically because they had an altered mental state or neurological problems, such as difficulty with speech or vision.

Neurological symptoms are ‘common’ in patients with Covid-19, the researchers said. Early research in China claimed up to a third of infected people may suffer headaches, dizziness or confusion.

This can sometimes progress in those whose disease deteriorates.

Of those who had a brain scans, 18 had findings that were considered ’emergency’ or ‘critical’.

They had a form of either a stroke, brain bleed or blocked blood vessels. Three patients died, all as a result of brain bleeds.

At least half the patients with a life-threatening neurological problem had histories of high blood pressure and/or type 2 diabetes.

Even though only 64.2 per cent of those who had a brain scan had high blood pressure, 72.2 per cent had critical findings.

Almost 40 per cent of the patients who had a brain scan had diabetes. But 50 per cent had worrying results.

Dr Freeman said: ‘Covid-19 is associated with neurologic manifestations, and hypertension and type 2 diabetes mellitus are common in individuals who develop these manifestations.

‘These populations may be at higher risk for neurologic complications and should be monitored closely.’

The study also found two-thirds of the patients with ‘critical’ results in the study were African American. They only accounted for 57 per cent of those who were given a brain scan.

Patients with critical results also tended to be younger, with an average age of 60.5 years. Seven patients were less than 55 years old and three were in their 40s.

The scientists suggested patients end up with life-threatening brain problems as a result of what’s called a ‘cytokine storm’.

A ‘cytokine storm’ is when the immune system overreacts to the coronavirus.

Dr Freeman said: ‘When your body is in an inflammatory state, it produces all these molecules called cytokines to help recruit the immune system to perform its function.

The ‘cytokine storm’ could lead to damaged, leaky blood vessels, causing blood pressure to drop and driving up the chance of clots forming.

The study found those with the worst brain scan results had higher markers of inflammation in their blood.

It suggests those with underlying ill health, caused by diabetes for example, are more prone to this overactive immune response.

Patients who have high blood pressure or diabetes are already more at risk of stroke, according to the NHS.

Blood vessels can be damaged by the effects of high blood glucose levels in people with diabetes, while high pressure can cause blood vessels to become narrow, rupture or leak.

High blood pressure can also cause blood clots to form in the arteries leading to the brain, which may lead to stroke.

Covid-19 has shown to have an impact on the vascular system in many of the most seriously ill patients by restricting the vessels. It is also thought to make the blood ‘stickier’.

Scientists say complications such as stroke may be more common in those with some illnesses as a byproduct of the way Covid-19 invades the human body.

Covid-19 enters cells by binding to a receptor called ACE2. It is expressed at different levels in individuals, and some scientists theorise those with high blood pressure and diabetes have more ACE2.

But this has not been definitively proven.

The findings of the study have not been published in a journal yet. They are due to be presented at the annual meeting of the Radiological Society of North America (RSNA) held virtually later this month.

Smart letterboxes to be trialled at two Clementi Housing Board blocks

Time for a reset to denuclearise North Korea: Korea Herald columnist
We and our partners use cookies on this site to improve our service, perform analytics, personalize advertising, measure advertising performance, and remember website preferences.Ok