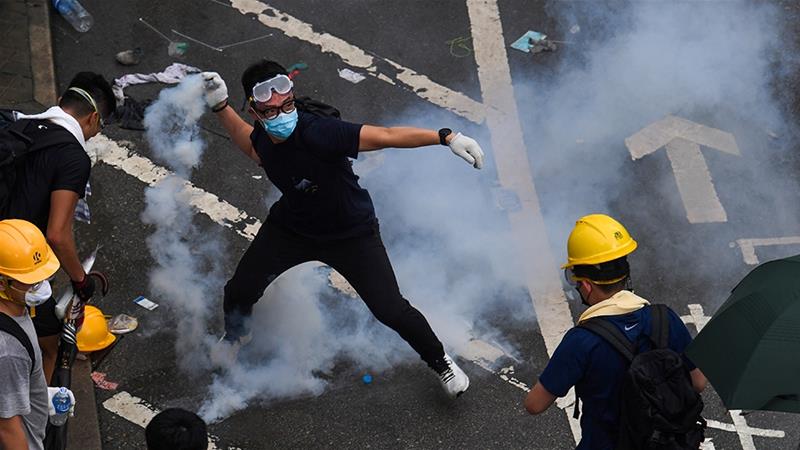 Hong Kong, China – Riot police fired tear gas, water cannon, and pepper spray after thousands of protesters surrounded the legislature and forced a delay in a debate over a controversial extradition bill.

What was a relatively peaceful demonstration erupted on Wednesday at about 3:30pm local time (07:00 GMT) as hundreds of protesters tried to storm the legislative council complex, prompting police to retaliate.

Black-shirted protesters wearing yellow helmets and goggles taunted police outside the complex as they descended on the streets against the bill which, critics say, will undermine the city’s civil freedoms in its “one China, two systems” political structure.

Front-line demonstrators in hard hats, their faces covered with masks, moved metal crowd control barriers, ignoring police pleas to stop. After several failed attempts, the crowd gained access to the grounds of the building and the police released more tear gas to push them back.

Police described the clashes as a “riot situation’.

Rubber-coated steel bullets were also fired by police. Chong Man Lung, a driver for government broadcaster RTHK, was hit in the head by a round and was taken to Queen Mary Hospital. At least four others were also injured, sources told Al Jazeera.

After the majority of the crowd was dispersed, demonstrators retreated but some could be seen donning gas masks and holding their ground at one section outside the complex. It was unclear how many arrests had been made.

“It was a f*#@ing disgrace. Unacceptable,” said Lewis, 25, a student who gave only his first name. “We were all retreating and the police fired a tear gas canister right into the crowd. My eyes started burning, it was hard to breathe.”

By early evening, police were still roaming around, clearing the few remaining streets of demonstrators outside Pacific Place, a luxury mall in the Admiralty area. 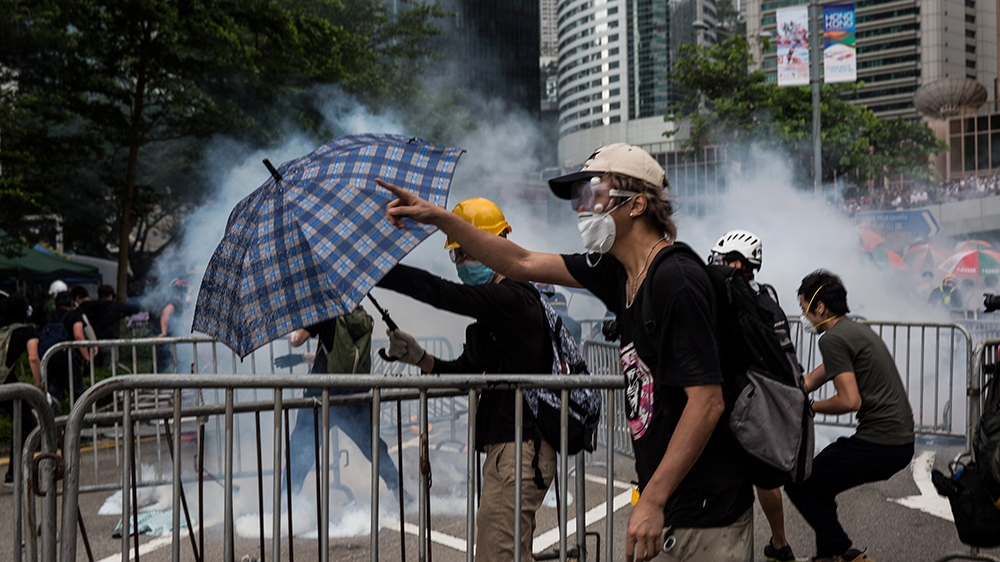 He said police took action after a large group of masked protesters charged onto roads surrounding the complex and started throwing objects – including metal barriers at officers.

“This is very dangerous action that could kill someone,” Lo said.

Amid the unrest, Hong Kong’s legislators postponed a debate on the extradition bill planned for Wednesday morning, handing at least a partial victory to critics who see the measure as an erosion of Hong Kong’s freedoms.

The government announced it would reschedule the Legislative Council meeting to “a later time to be determined”.

Hong Kong’s Chief Executive Carrie Lam already made some revisions to the amendment.

The proposed legislation would enable Beijing to request the extradition of suspects wanted for crimes committed on the mainland – an overreach, opponents say, which could leave Hong Kong residents potentially open to politically motivated claims by the Chinese government.

“No matter where you are from – mainland China, Hong Kong, or other countries – if you violate the interests and laws of the Communist China, as long as you’re wanted by mainland China you can be detained right away,” Hu told Al Jazeera.

“If such a law is passed, they don’t have any restrictions. It’d be too easy for them to catch the most politically active people from Hong Kong, even if it’s just a few hundred.”

Issac Cheng, the 19-year-old vice chair of student protest group Demosisto, told Al Jazeera he saw the decision to postpone the debate as “some kind of victory for Hong Kong people and the protesters”, but warned the city’s pro-China legislators would be “ready for a marathon meeting” in an attempt to outlast those demonstrating outside.

There are 70 seats in the assembly, and Beijing’s supporters have a majority.

Speaking from an assembly at a site about one kilometre from the main protest area in Admiralty, a key business district of Hong Kong island, Cheng said regardless of when the bill is finally debated, the city had shown it was ready to stand in opposition to it.

“This is only the start, not the end,” he said. “Hong Kong people are ready for a movement against the government.”

The protests started overnight and by 8am (00:00 GMT), the streets surrounding the legislative body’s offices were thronged with mainly young protesters, many of whom wore black and obscured their faces with surgical masks. 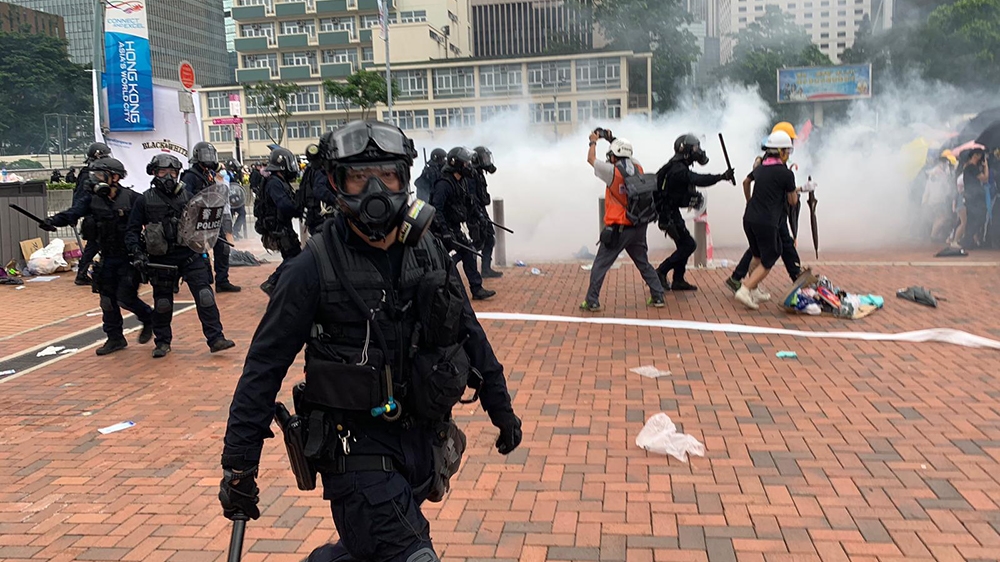 Richard Cullen, a visiting professor in the faculty of law at the University of Hong Kong, said the protests had been somewhat successful “in light of what they’re trying to achieve”, but added the disruption was “plainly anti-democratic. No one should be able to able to stop the normal functioning of a democratic legislative body”.

He said the fact there were amendments to the initial bill showed the government had taken critics’ concerns into account, and argued those in opposition had allowed fears about China to get in the way of its true purpose.

“This is a really serious problem, where criminals can use Hong Kong as a haven. This is not a perfect solution, but things rarely are. There will be constant scrutiny to see how [the bill is] used.”

Away from the flashpoints, the protests were reminiscent of 2014’s Occupy movement with demonstrators taking over some of the same roads as nearly five years ago in a huge, nonviolent sit-in that captured the world’s attention for months.

As then, smiling, energetic protesters were at pains to present a non-threatening face of opposition to what they see as unwanted Chinese encroachment into the political and social life of Hong Kong, a former British colony that was returned to China in 1997. 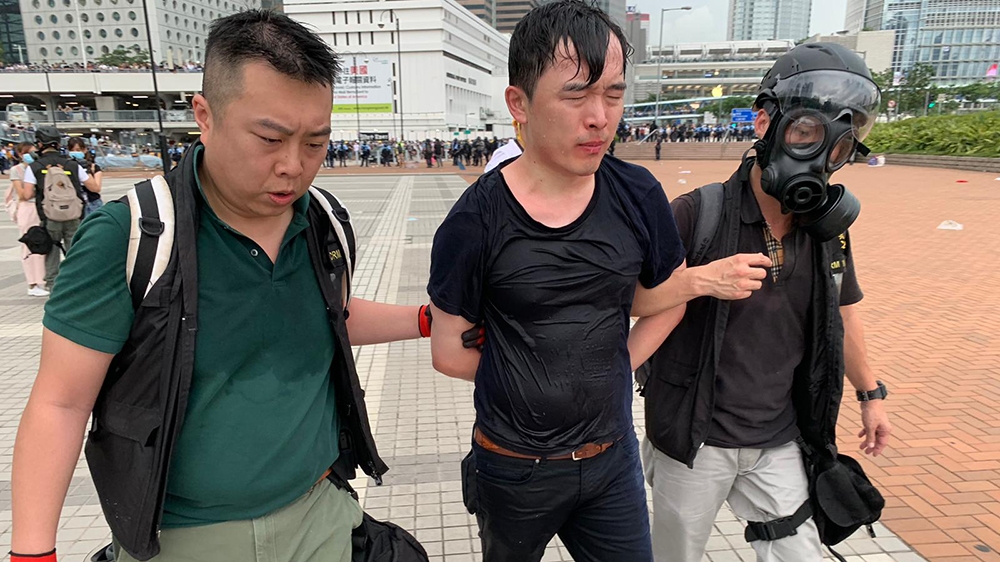 Bottles of water, face masks and goggles were happily handed out to fellow demonstrators, while other volunteers patrolled the protest site with black bin bags, making sure the streets underfoot remained rubbish-free.

Cheng, the Demosisto leader, pointed to an increase in support from the city’s business community for the protests, noting many had closed on Wednesday instead encouraging their employees to attend the rally.

Cheng said the turnout for Sunday’s march, which organisers said topped one million people, followed by the thousands demonstrating on a muggy Wednesday morning, showed the city wasn’t ready to succumb to Beijing’s increasingly authoritarian stance towards it.

“It shows that Hong Kong people have values, not only about economics,” he said. 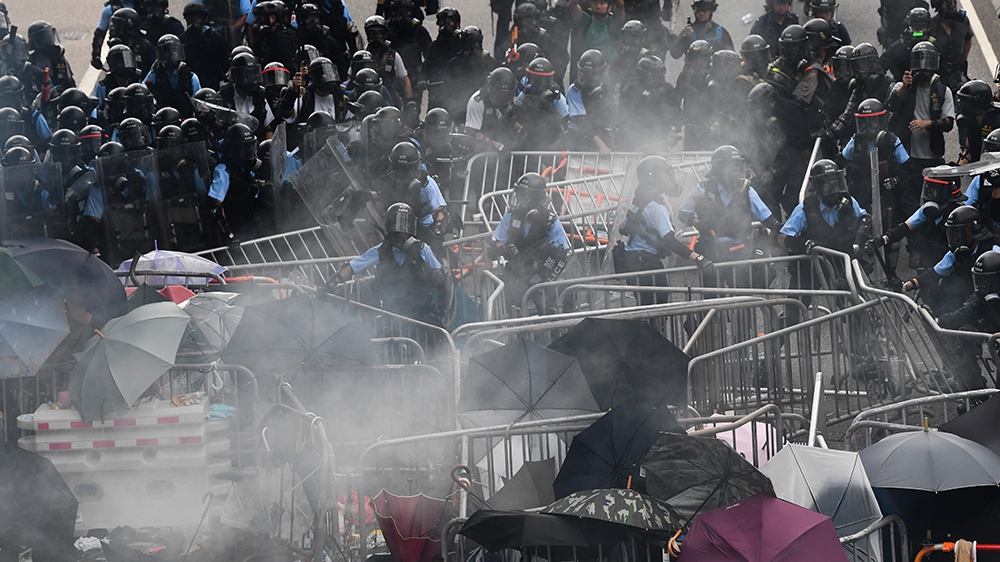 Despite crumbled caliphate, hunt for Baghdadi continues in Syria