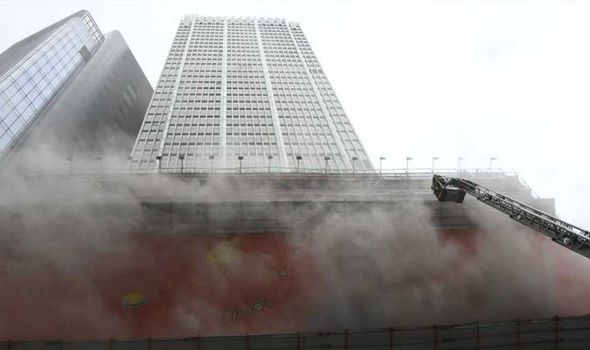 More than 300 people are thought to be trapped on the roof of the skyscraper. The fire, which broke out in an electrical switch room, spread through the scaffolding on the 38-storey building. It began during the lunchtime rush today in Hong Kong.

So far, at least seven people are suffering from inhalation of smoke, including a woman in her 60s who has been hospitalised with breathing difficulties.

As of 2pm (6am GMT), Hong Kong police said that 160 people had been successfully evacuated, but more than 300 remained trapped.

Firefighters were seen using an extendable ladder at 1.45pm to rescue people trapped on the fifth floor.

The building, which operates as a shopping mall and an office tower complex, has both office workers and restaurant-goers trapped inside.

According to the police, a preliminary investigation has revealed that the blaze broke out in the electrical switch room on the lower floor of the mall.

Prisoners are given jobs at Bernard Matthews turkey plant

Goodwin: The alternative ‘facts’ of the Times’ Brett Kavanaugh story