Hong Kong hit a record 4,500 Covid cases today as the Omicron wave ravages the city despite its zero Covid strategy.

The city is currently in a near total lockdown, with flights down around 90 per cent due to strict coronavirus regulations and schools, playgrounds, gyms as well as most other venues shut.

Restaurants close at 6pm, while most people, including the majority of civil servants, are working from home. And more than 2,000 hamsters and other animals have been culled to stop transmissions.

But despite the hardline approach the city reported a record 2,071 new cases in it 7.5million population yesterday, with that number more than doubling today.

At least two hospitals have placed patients in beds outside their entrances, with medical facilities beginning to buckle under the strain of rising infections.

No place in the world has managed to return to zero Covid cases after such an outbreak except mainland China, which has imposed citywide lockdowns and mass stay-at-home orders when even a handful of cases are detected.

Lam ruled out that approach, saying: ‘We have no plans whatsoever to impose a complete, wholesale lockdown.’

But she insisted the city would continue to follow the mainland zero Covid policy, despite the strain on the county’s quarantine facilities. 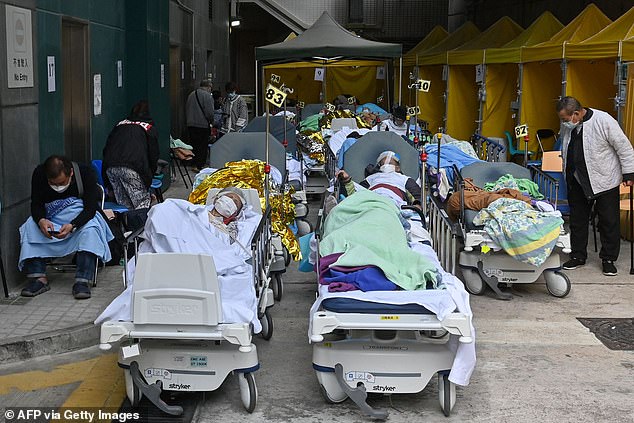 Hong Kong has given up on its zero Covid strategy after hospitals in the city became overwhelmed with patients. Pictured: People lie in hospital beds outside Caritas Medical Centre in Hong Kong today 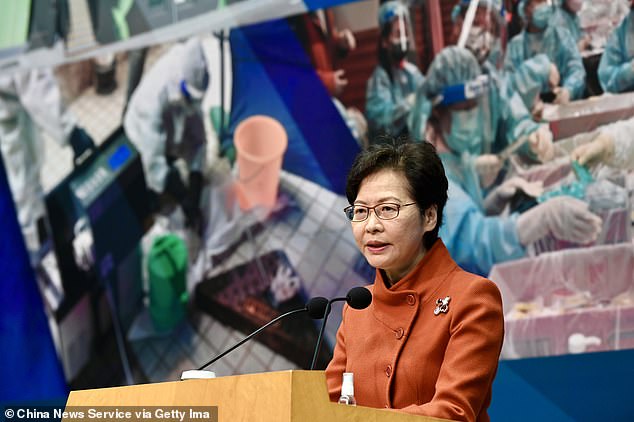 The fifth wave of cases in Hong Kong has extended beyond the city’s capacity, according to Hong Kong Chief Executive Carrie Lam (pictured today) 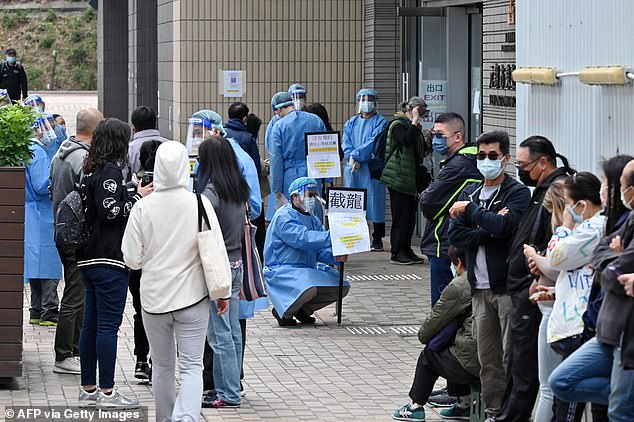 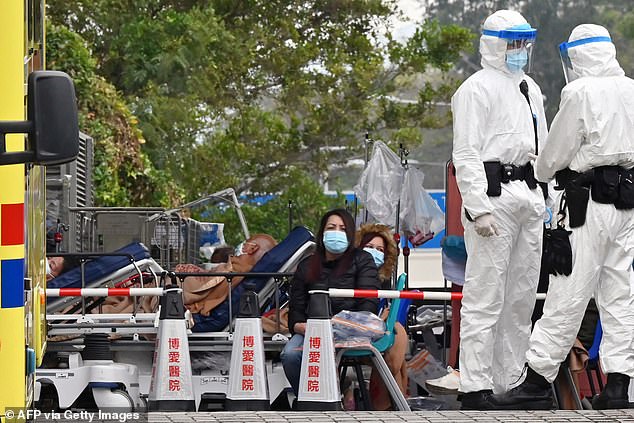 Previously, close contacts of virus cases in Hong Kong were being sent to Government quarantine camps. But beds quickly filled up, forcing the city to turn newly built public housing and 10,000 hotel rooms into quarantine accommodation.

Siddharth Sridhar, clinical assistant professor at the University of Hong Kong’s Department of Microbiology, said ‘a very practical adjustment in terms of our containment strategy’ is needed.

The city of Suzhou – a trading, commercial and industrial hub in the eastern province of Jiangsu – reported eight domestically transmitted infections with confirmed symptoms for Monday, the National Health Commission (NHC) said on Tuesday.

The highly transmissible Omicron variant was detected among the cases, a Suzhou official said on Monday, without specifying the number of Omicron cases.

Despite the low caseload by global standards, Suzhou said on Monday it had suspended some long-distance bus services, locked down affected buildings and urged residents not to leave home or the city for nonessential reasons.

On Tuesday it closed 15 highway entrances and required drivers and passengers leaving through others to have proof of negative test results within 48 hours.

Suzhou Industrial Park — an important high-tech development zone that hosts about 100,000 companies and accommodates manufacturing facilities of foreign firms such as Samsung and Eli Lilly – started a round of mass testing on Monday.

‘We expect a short-term impact on our manufacturing and logistics operations in Suzhou,’ automotive supplier Robert Bosch said, adding that local office staffers were working from home.

‘This is not sustainable,’ he said.

‘Eventually we are going to see a very local protracted outbreak, likely to be worse than previous cases.’

But Lam insisted the city would continue to follow mainland China’s approach, despite the toll on Hong Kong’s economy.

She said: ‘We have to continue to fight this anti-epidemic battle. Surrendering to the virus is not an option.

‘So far, our measures to contain the spread of the disease remain legitimate and valid.

‘The problem we are facing is given the magnitude, the pace of and the severity of this fifth wave. It has outgrown our capacity.’

Authorities will continue to use smaller-scale district lockdowns, with testing of all residents in housing blocks where cases are detected, she added.

But the new wave fuelled by the highly transmissible Omicron virus variant has battered the city’s capacity for testing, quarantine and treatment, and is testing the policy like never before.

More than 2,000 new daily infections were reported Monday, and the figure hovered over 1,000 for much of the last week.

Local researchers have warned that new daily cases could exceed 28,000 a day by March.

Before this outbreak, Hong Kong treated all coronavirus patients in dedicated isolation wards, but beds at hospitals and a temporary mass treatment facility near the airport have quickly filled.

Close contacts of virus cases were earlier sent to a government quarantine camp, but many are now being told to isolate at home.

Lam said 3,000 flats in newly constructed public housing blocks will be converted for quarantine use and that officials are seeking 10,000 hotel rooms too.

Last week saw long queues of people waiting to get tested, and many who tested positive reported being turned away from hospitals.

Hong Kong has sourced 100 million rapid test kits and will distribute a million of them a day to high-risk individuals once they arrive, Lam said Tuesday.

Scenes from the city in recent days resembled the early phase of the pandemic, as shoppers cleared out supermarket shelves to stock up on food and essentials.

Hong Kong imports most of its fresh food and produce from mainland China, and vegetable prices spiked last week due to a virus-related supply disruption.

Lam on Tuesday said her administration was recruiting more cross-border drivers and will look into waterborne freight as an option.

8 incredible sales and deals to shop this weekend

Bolt reveals plans to allow drivers to set their OWN fares