Hong Kong: Activist and business tycoon Jimmy Lai was sentenced to 13 months in jail on Monday for urging participation in last year’s banned Tiananmen vigil, amid a crackdown by Chinese authorities that has rolled back the semi-autonomous city’s civil liberties.

The District Court in Hong Kong convicted seven others on similar charges and handed out sentences of up to 14 months. 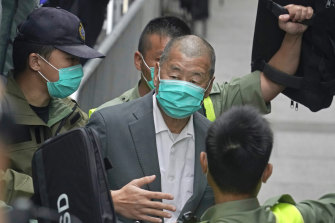 Hong Kong’s government has banned the candlelight vigil for the past two years on pandemic control grounds, although it is widely believed the ban is intended to be permanent as authorities look to squelch the city’s pro-democracy movement.

Lai, the founder of the now-shuttered pro-democracy newspaper Apple Daily, has already been jailed for taking part in pro-democracy protests for which he will serve a total of 20 months.

In the latest case, he was convicted on Thursday of inciting others to take part in the unauthorised assembly to memorialise those killed in the army’s bloody crackdown on student-led pro-democracy protests that centred on Beijing’s Tiananmen Square in 1989.

Two other defendants convicted along with Lai, lawyer Chow Hang-tung and former reporter Gwyneth Ho, were sentenced to 12 and six months respectively for participating in the vigil. Chow was also sentenced for inciting others to join.

The trio had previously pleaded not guilty to the charges.

Others sentenced on Monday included Lee Cheuk-yan, the former chairman of the now-defunct Hong Kong Alliance in Support of Patriotic Democratic Movements of China. Lee received 14 months for organising last year’s unauthorised assembly, during which thousands of people gathered to light candles and sing songs in Hong Kong’s Victoria Park despite police warnings that they may be breaking the law.

The remainder were given sentences ranging from four months, two weeks, to nine months.

The Hong Kong Alliance previously organised a candlelight vigil each June, the only large-scale public commemoration on Chinese soil of the 1989 crackdown in Beijing.

More than a dozen activists had already been convicted over the banned vigil, most of whom pleaded guilty, including outspoken activist Joshua Wong, who was given 10 months in jail for participating. He was already in jail after a previous conviction on other charges related to his activism.

Two other activists in the case, Nathan Law and Sunny Cheung, have fled the city. 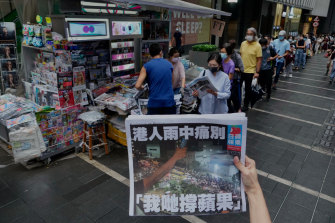 Pro-democracy newspaper Apple Daily was forced to shut down after sustained pressure from the Chinese government. Credit:AP

Lai’s Apple Daily was forced to shut down in June after police froze $2.3 million of its assets, searched its office and arrested five top editors and executives. Police also accused the individuals of foreign collusion to endanger national security.

The Hong Kong Alliance disbanded in September, amid accusations from the government that the organisation was working for foreign interests. Leaders of the alliance categorically denied the accusations.

In the face of criticism at home and abroad, Chinese and Hong Kong officials have repeatedly emphasised promotion of the law and its supposed role in safeguarding national security and social stability, even to students at the lowest grades.