How London’s Covid outbreak is rapidly shrinking: All but ONE borough saw infection rates drop last week – with some parts of the capital seeing cases HALVES

Only one London borough suffered a spike in coronavirus cases last week, Government data has revealed as the capital’s second wave remains firmly in retreat.

Department of Health’s most-up-to-date data showed 31 out of 32 local authorities saw their infection rate dip over the seven-day spell to March 6.

Hammersmith and Fulham recorded the sharpest drop in Covid cases, after they halved in a week. It was followed by Haringey, Brent, Bromley and Bexley, where infections plummeted by more than 40 per cent.

Kingston-upon-Thames was the only London borough to see cases tick upwards, after they rose by 28 per cent last week to 50.1 positive tests per 100,000 residents.

Public health officials in the capital credited the ‘heroic efforts of Londoners’ for the nosediving infection rates last week, but warned they must continue to stay at home and follow the rules.

There is a delay of at least a week between someone catching the virus, developing symptoms severe enough to get a test and receiving a positive result, creating a lag in the figures.

It comes after a slew of data today offered yet more proof that Britain has turned the tide on the pandemic, with infections continuing to drop across the country. Just six out of 149 local authorities in England saw Covid cases fall last week, according to Public Health England. 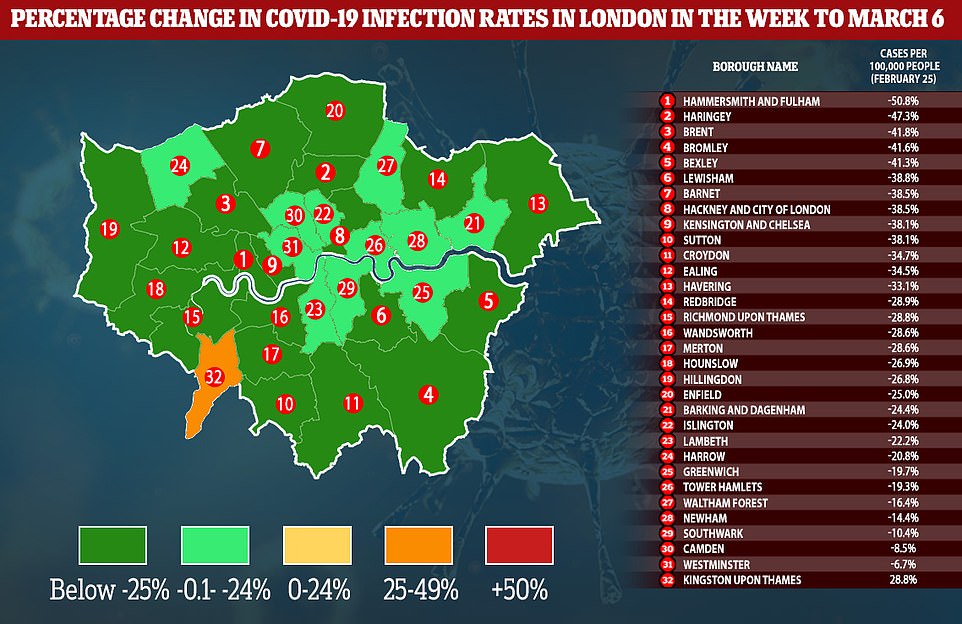 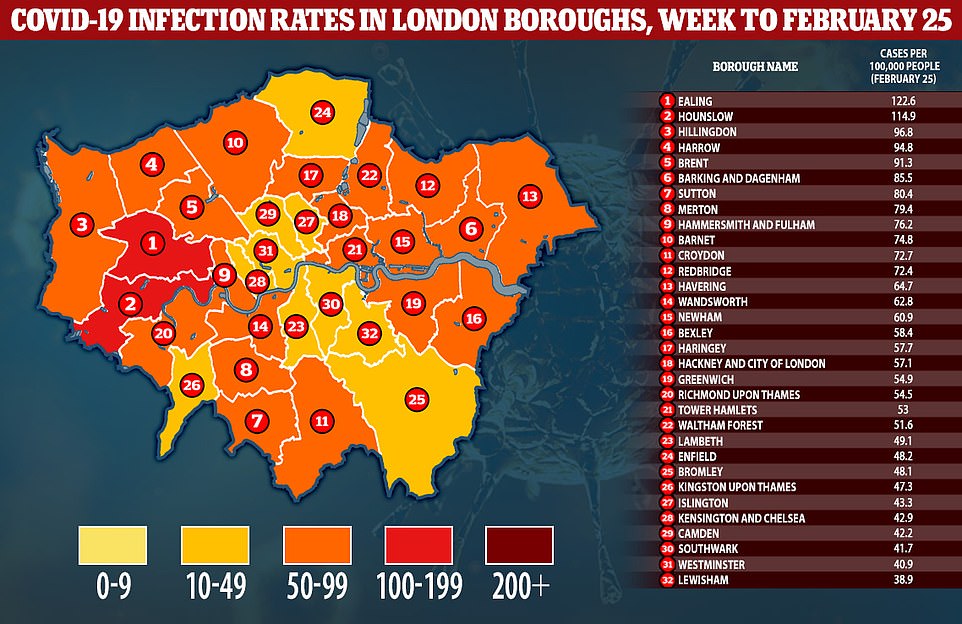 Coronavirus infection rates have plunged across the capital over the last two weeks to February 25. In England of the 16 local authorities with an infection rate below 50 per 100,000, as many as 10 are in London

Fewer than half of care home staff have accepted their Covid vaccine in parts of London — despite working with elderly residents who are most at risk of dying from the disease, official figures have revealed.

NHS England statistics showed 74.3 per cent of care home staff across the country had received their first dose of the vaccine by March 7.

But the data — which break up the country into 150 areas — shows uptake of the life-saving vaccine among carers and residents varies widely across the nation.

Lambeth in south London has the lowest proportion of care home staff vaccinated, with an uptake rate of just 42.6 per cent. In comparison, seven areas have vaccinated more than 85 per cent, with the Isles of Scilly inoculating all 30 of its care home staff.

All staff in care homes should now have been offered a first dose of the vaccine, with England’s Covid vaccine roll-out officially widened to over-55s this week.

But a huge postcode lottery in the roll-out has emerged in recent weeks, with some healthy adults in their twenties managing to get vaccinated. The mammoth inoculation drive must go smoothly for lockdown to be safely eased in the coming months.

Yesterday’s figures — which offer the most up-to-date regional breakdown of the roll-out — show the percentage of carers who have opted in. It will not include a small minority who may have already been offered a jab but are still waiting for an appointment.

Statistics show a clear divide has emerged across the nation, with 18 areas having vaccinated fewer than 60 per cent of staff — 16 of which were in London.

The Department of Health offers swabs to anyone who comes forward for a test, and publishes anonymised data on how many people test positive in each borough – allowing public health officials to track the outbreak.

The figures are seen as a good measure of the spread of the virus in each area, but experts warn they miss asymptomatic infections – when someone has the virus but does not suffer any symptoms – which are thought to account for at least a third of all cases.

Ealing was the capital’s hotspot for weeks during the first wave, with some areas more badly hit than others. Public health experts are yet to reveal why this may be the case, although it’s thought to be linked to deprivation in some areas.

Lewisham had the lowest Covid infection rate in the capital (21.6 per 100,000), after cases there tumbled by almost 40 per cent in a week.

At the peak of the first and second waves the capital was registering the most cases in the country.

During the darkest days of January, its hospitals also warned they could be overwhelmed by surging hospitalisations.

England’s Covid hotspot was Yorkshire and the Humber, data showed, with cases there at 100 per 100,000. Several studies had previously suggested cases had stopped falling in the region, although it was unclear what was behind this.

A spokesman for the Mayor of London told MailOnline last week the capital’s plummeting infection rates were down to the ‘heroic efforts’ of Londoners ‘who have continued to stay at home and have followed the rules’.

‘The Government’s roadmap shows the path we need to stay on to ease restrictions and the roll-out of the vaccine means there is light at the end of what has been a very dark tunnel,’ they said.

‘But the NHS remains under severe pressure – there are four times the number of Covid-19 patients in our hospitals than when restrictions were lifted last summer, and the vaccination programme has not yet reached all of the most vulnerable Londoners. We still have some way to go.

‘The Mayor is clear that now is not the time to take our foot off the pedal, risking a surge in infections or the spread of variants. It’s absolutely vital we keep up our efforts and follow the rules, and if you’re offered a vaccine, please take it.’ 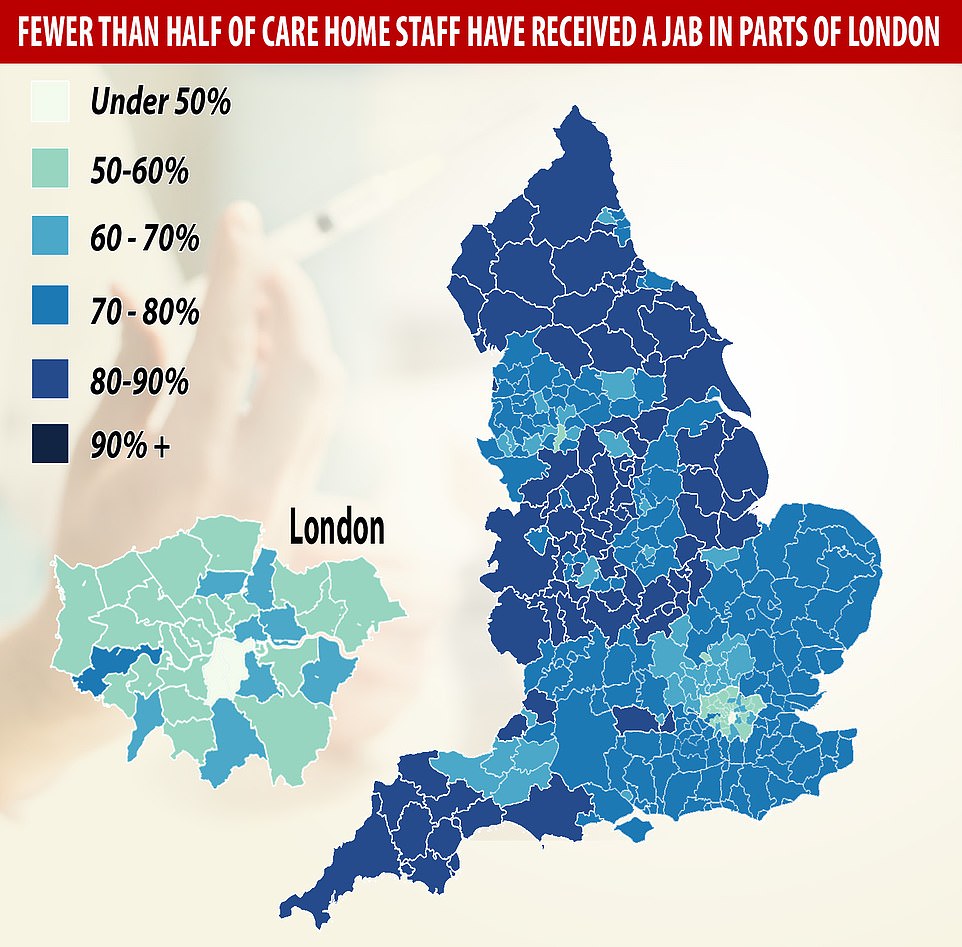 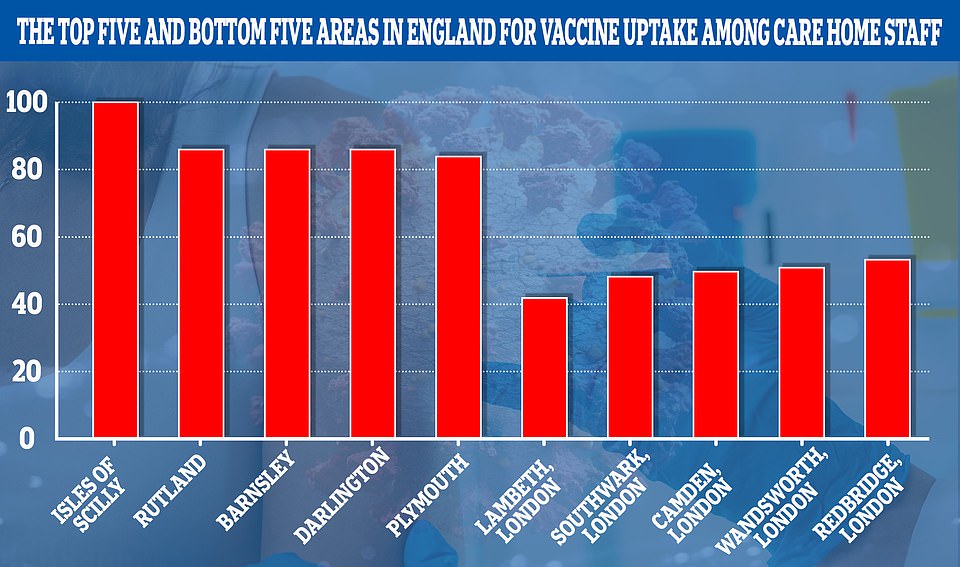 How does the Taliban make money?