The final push! All over-18s will be invited for Covid vaccines TOMORROW as rollout reaches its last hurdle – while huge queues form in London as twenty-somethings rush to get jabs in walk-in clinics

All over-18s will be able to get Covid vaccines from tomorrow as the NHS reaches the last hurdle in its plan to offer jabs to everyone by July.

The last step down through the age groups will mean that any adult in Britain can get a Covid vaccine if they want one.

NHS chief Sir Simon Stevens had promised to get the programme completely opened up by the end of the week and 18 to 20-year-olds will start to get their texts and letters from the health service tomorrow, government sources confirmed.

The rollout had opened up to 21-year-olds yesterday, Wednesday, and will tomorrow take its last step into the teens.

It comes as huge queues have formed across the capital with young Londoners rushing to get their Covid jab at walk-in clinics and over-40s cutting the wait to get their second vaccinations today.

Around 200 people were spotted lining up outside a pharmacy before it had even opened in north Greenwich, south-east London, this morning.

Danny Thorpe, leader of the borough’s council, likened the rush to get a first dose of the jab to a ‘social media event’ among the younger generation, adding that people are ‘turning out in their droves’. 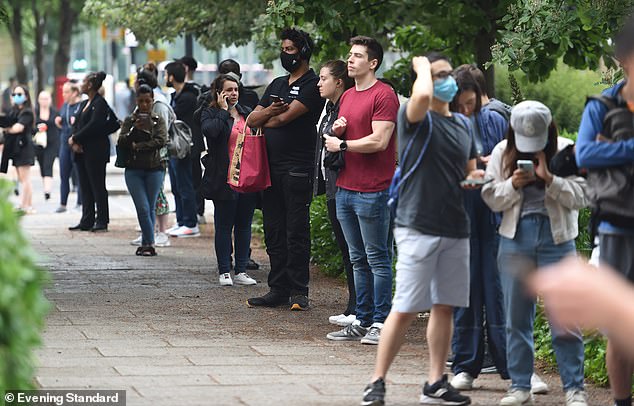 Around 200 people were spotted lining up outside a pharmacy (pictured above) before it had even opened in north Greenwich, south-east London, this morning

It follows Greenwich Council offering vaccinations at walk-in and pop-up clinics with no booking required. Depending on which pharmacy and people’s age, patients do not need proof of address, immigration status, ID or an NHS number.

Other boroughs also taking part in the initiative include Bexley, Bromley, Lambeth, Lewisham and Southwark.

Meanwhile, Dr Vin Diwakar, the medical director for the NHS in London, has encouraged over-40s in the capital to reduce their gap between first and second doses by a third – from 12 to eight weeks.

More than half of UK adults have received both doses of a Covid-19 vaccine, putting it far ahead of the rest of Europe.

Mr Thorpe told the Evening Standard: ‘What this increasingly shows is that far from being a city of hesitancy, as we move into younger age groups, Londoners now want to see the back of Covid.

‘People are turning out in their droves. Particularly for the younger generation, this is becoming a social media event. We are spreading the word through all our channels and seeing an amazing, amazing response.’

Dr Diwakar added: ‘To ensure maximum protection, I urge all Londoners to book in their second dose as soon as possible.’

The newspaper previously reported that at least 100,000 jabs a day have to be handed out in London for the Prime Minister to reach his target.

Boris Johnson aims for all people aged over 18 to have a first dose of the jab and for two thirds of adults to have both doses by July 19.

It comes as new analysis suggests the chance of getting Covid-19 after being vaccinated drops sharply 21 days following a first dose. 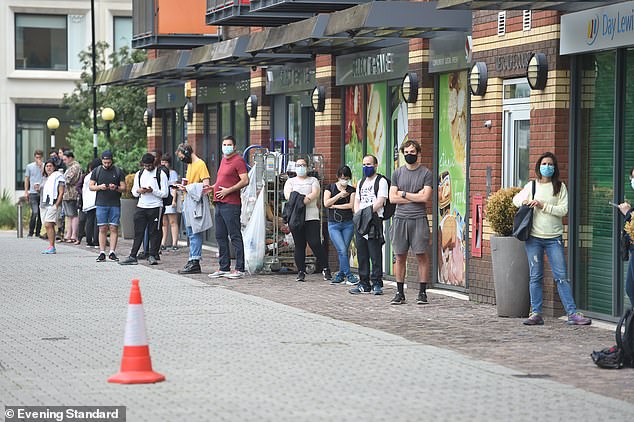 Danny Thorpe, leader of the borough’s council, likened the rush to get a first dose of the jab to a ‘social media event’ among the younger generation (pictured: vaccination queues at the Day Lewis Pharmacy in Greenwich today) 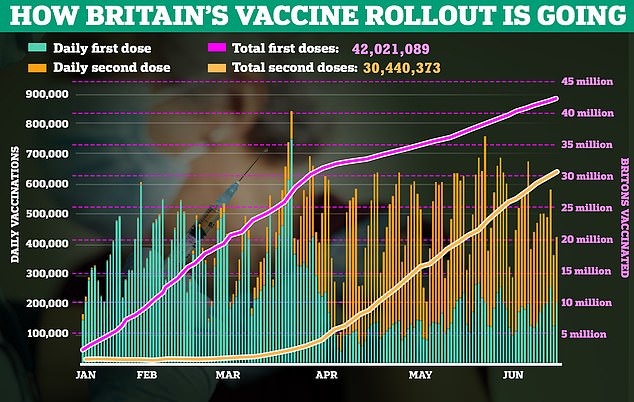 More than half of UK adults have received both doses of a Covid-19 vaccine, putting it far ahead of the rest of Europe

Breakdown of vaccinations per London borough

People who become infected post-vaccination are also less likely to have symptoms than those who test positive for the virus but who have not been jabbed.

The findings have been published by the Office for National Statistics (ONS) and are based on a sample of adults who had received the vaccine up to May 31.

They suggest the risk of infection increases following a first dose, peaking at around 16 days.

There is then a ‘strong decrease’ in risk up to around one month after the first dose, and the risk then declines slowly but steadily.

Rates of infection post-vaccination are likely to be very low, however.

There was a very slight difference between whether the person had received the Pfizer/BioNTech vaccine (0.8 per cent of the total) and Oxford/AstraZeneca (0.3 per cent).

From a sample of 210,918 adults who had received both doses of vaccine, just 0.1 per cent were subsequently found to have a new positive infection.

Possible explanations for infection shortly after getting the vaccine include someone catching Covid-19 before they had received a jab, or exposure to Covid-19 at a vaccination centre, the ONS said.

The analysis came as separate figures suggests cases of Covid-19 are ‘rising exponentially’ across England, driven by younger and mostly unvaccinated age groups.

A study commissioned by the Government found infections increased 50 per cent between May 3 and June 7, coinciding with the rise of the Delta coronavirus variant which was first detected in India and is now dominant in the UK.

Data from nearly 110,000 swab tests carried out across England between May 20 and June 7 suggests Covid-19 cases are doubling every 11 days, with the highest prevalence in north-west England and one in 670 people infected.

Meanwhile, Downing Street has said that the Government wanted people to travel abroad ‘as soon as it is safe to do so’ but stressed that no decisions had been made about opening up holidays for those who had received both doses.

The Prime Minister’s official spokesman told a Westminster briefing: ‘As we have always set out, we want people to be able to travel abroad as soon as it is safe to do so.

‘Currently we have set out a traffic light system for international travel. We are always learning more about the virus and its variants. 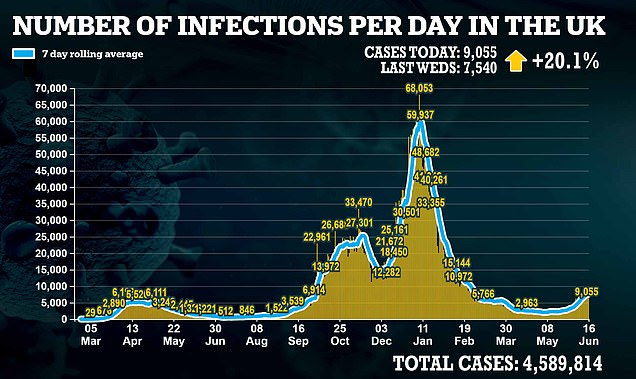 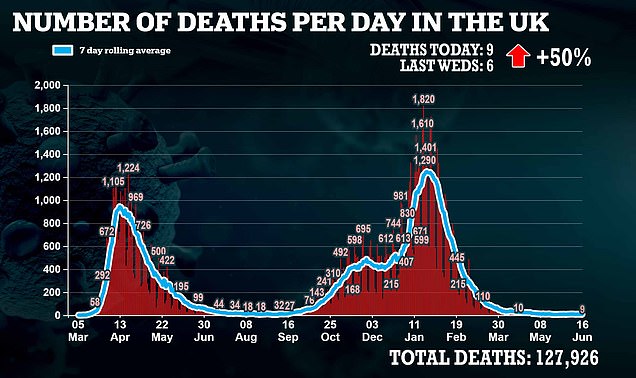 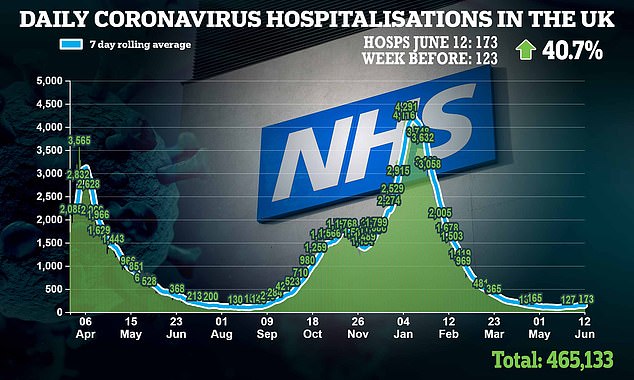 ‘At this stage in the pandemic, our current approach is the right one, but we keep our measures under review, and that was set out clearly in both the road map and the Global Travel Taskforce report.

‘On the point about double vaccinations, absolutely no decisions have been made on that.’

Coronavirus restrictions in England have now been formally extended until July 19, following a vote in the House of Commons on Wednesday.

MPs voted 489 to 60 to approve regulations delaying the easing of the measures, though Prime Minister Boris Johnson suffered a rebellion from members of his own party over the delay.