At least 287 people arrested and 110 injured, including 17 policemen, in the worst riots in Paris in more than a decade.

“I will never accept violence,” Macron said at a press conference, before leaving the G20 summit in Argentina to deal with the domestic crisis.

“No cause justifies that authorities are attacked, that businesses are plundered, that passers-by or journalists are threatened or that the Arc de Triomphe is defiled,” he said.

The “yellow vest” demonstrations, which were first triggered weeks ago by planned fuel price hikes, turned chaotic in the French capital on Saturday, which saw its worst riots in more than a decade.

French police officers responded with tear gas, after demonstrators hurled stones and projectiles towards them, on the third weekend of demonstrations that have morphed into a broader rebuke of Macron. 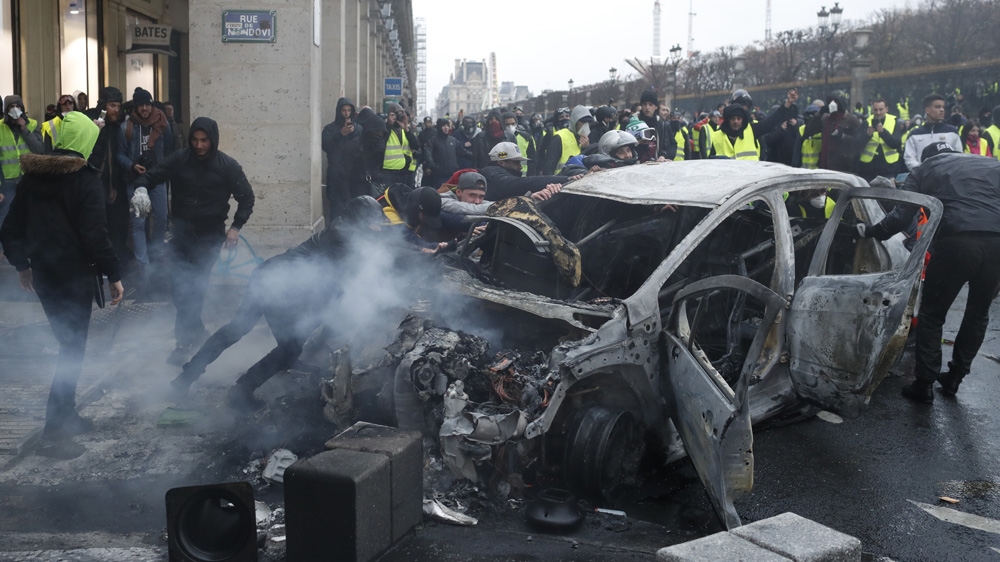 Authorities said that at least 287 people were arrested and 110 injured, including 17 policemen.

He did not rule out imposing a state of emergency – a demand made by the police union Alliance – declaring: “Nothing is taboo for me. I am prepared to examine everything.”

Six buildings were set ablaze, and nearly 190 fires were put out, the interior ministry said.

An estimated 75,000 protesters, the majority of them peaceful, were counted across France on Saturday afternoon, according to the interior ministry.

That number was well below the total on the first day of protests on November 17, when 282,000 people took part across the country. Last Saturday, 106,000 took to the streets.

But the vast plumes of smoke and tear gas that clouded the capital on Saturday were a testament to the escalation of violence in Paris.

“Those guilty of this violence don’t want change, they don’t want improvements, they want chaos. They betray the causes that they pretend to serve and which they manipulate,” Macron said on Saturday.

“They will be identified and brought to justice for their actions,” he said.

Macron said he would convene a meeting on the situation with his prime minister and interior minister on Sunday morning in Paris.

“I will always respect debate and I will always listen to the opposition but I will never accept violence,” Macron said.

“The protests were even more violent than last week’s demonstrations. There were more arrests and more injuries. There seems little chance of reconciliation any time soon.”

The “yellow vest” movement erupted on social media in October and has since become a wider protest against Macron, who is accused of failing to recognise the rising cost of living that has left many people struggling.

The countrywide protests have included many pensioners and have been most active in small urban and rural areas where demonstrators have blocked roads, closed motorway toll booths, and even walled up the entrance to tax offices.

Two people have died and dozens have been injured in the rallies, which opinion polls suggest still attract the support of two out of three French people.

Attempts by the government to negotiate with the grassroots movement have failed, in large part because representatives have insisted on public talks broadcast on TV.

Macron has sought to douse the anger by promising three months of nationwide talks on how best to transform France into a low-carbon economy without penalising the poor.

He also vowed to slow the rate of increase in fuel taxes if international oil prices rise too rapidly but only after a tax rise due in January.