Hurricane Ian struck a large swath of Florida on Wednesday, US time. Evacuations were ordered ahead of the tropical system, but some travellers got stuck trying to leave; other residents decided to ride out the storm.

Here are some of the stories and scenes from Florida and beyond, as slow-moving Ian affected millions of people in the United States after pummeling Cuba. 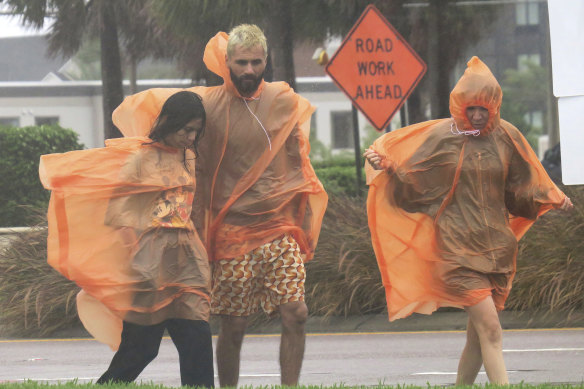 Raincoats were largely futile as residents walk along International Drive in Orlando, Florida, with Hurricane Ian approaching on Wednesday.Credit:AP

Clearwater resident Erik Moon lives in an evacuation zone but decided to stay in his apartment after he was unable to find plywood to secure his home. For now, Moon is staying put in his two-level unit with his cat, Gonzo, and his dog, Dallas.

Moon, 36, lives about 800 metres from the beach. Although concerned about a storm surge, he said on Wednesday that he thought it would likely present a bigger danger to property than his own life.

Moon, a DJ at a club in Tampa, said he didn’t have renter’s insurance and would be counting on the building owner’s insurance to cover anything he lost. His main worry was the health and wellbeing of his Florida friends, but he wasn’t second-guessing his decision to stay.

“Sometimes you just want to be around where you are from,” Moon said. “Now, I paid attention, and I would have evacuated if I really felt it was that much of a danger to my life. But I think I made the right choice.” 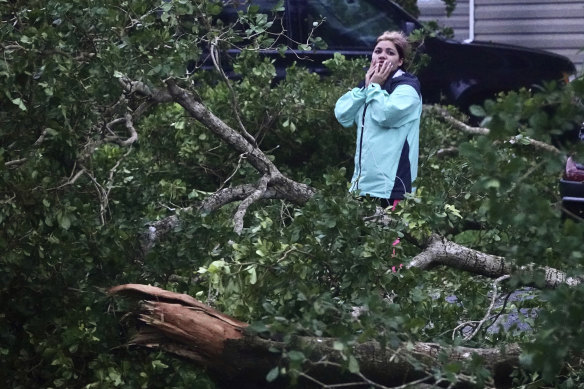 Zuram Rodriguez surveys the damage from Hurricane Ian near her mobile home in Davie, Florida, on Wednesday.Credit:AP

Jackson Boone gathered with some of his employees and their pets at his law firm in Venice, Florida, to ride out the storm. They gathered in an interior part of the building and tried to follow officials’ guidance.

At one point Wednesday, Boone opened the door. The wind howled. Rain was pelting horizontally, he said.

“We’re seeing tree damage, horizontal rain, very high wind — I think it’s a 100-plus [miles-per-hour wind] sustained outside right now,” Boone said, via text message. “We have a 50-plus-year-old oak tree that has toppled over.” 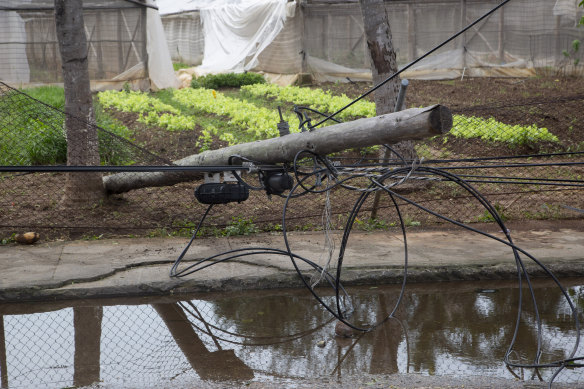 Boone left his two-storey home closer to the coast, where surges were expected to crest three metres or more.

“We never want to deal with water. Water, when it gets to that high, is extremely dangerous, no matter how high your house is,” Boone said.

Dozens of passengers were stranded Wednesday at Orlando International Airport after their flights were cancelled and the airport closed mid-morning.

An airport employee went around to clusters of passengers, telling them to move to the food court, where they would be directed to buses that would take them to shelters.

Amidou Kone had travelled to Clearwater for a weekend vacation with his two daughters. When his flight out of Tampa was cancelled, he tried Orlando. Now, he’s stranded. “We came for a weekend trip, and now we are stuck,” he said. 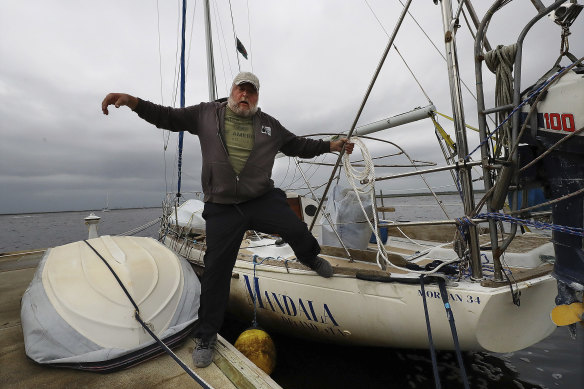 Dana Burchatz, 57, secures his 34-foot Morgan sailboat at Lang’s Marina as he prepares for Hurricane Ian on Wednesday in Georgia.Credit:AP

Paula Bowles was visiting family in Orlando and decided to head home to Atlanta, but her flight was cancelled, too. “Being stranded is a feeling like nobody cares,” she said. “It’s scary.”

Paul and Brittany Inglesby found themselves stranded with their infant. They were able to find a flight for Friday morning, but now they must get by until then.

“It kind of sucks because we only planned for so many days, so we’re a little bit low on diapers and stuff like that,” Paul Inglesby said, “but we’ve got enough for now, hopefully.” 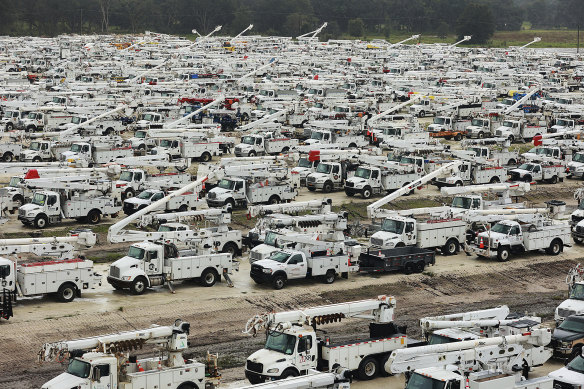 Trucks and utilities are staged in a rural lot in Sumter County, Florida, as part of emergency preparations.Credit:AP

His wife added: “When you have a little kid with you, he takes top priority. So, when he starts running low on stuff, that’s when it gets kind of terrifying.”

Robert and Debbie Gruver of Port Charlotte, Florida, stopped Wednesday afternoon at a South Carolina rest area. But they were not fleeing the storm; they were driving back to their west Florida home from a trip to Buffalo, New York.

The couple said they have lived in Florida for 25 years and recalled Hurricane Charley, a category 4 storm that hit the state in 2004. They were on their trip when they learned of the threat from Ian.

The couple’s plan is to wait things out in Savannah, Georgia, for a day or two, then head down to Port Charlotte to survey any potential damage.

“We have a new roof so hopefully it’s still there,” Debbie Gruver said.

“We planned on being back at this time, but we didn’t plan on a hurricane,” her husband said.

At the Hilton Garden Inn in Fort Myers, guests — including some forced to evacuate their homes — sought refuge from the raging storm.

As of Wednesday morning, all 126 rooms were booked, and people were still trying to find a room at the hotel, near the Southwest Florida International Airport.

“There was a definite influx,” said Kerry Collins, who works at the hotel’s front desk.

The hotel is in a flood zone and had to switch to a generator after the power went out.

“Anybody who is staying with us has to sign a waiver saying we are not responsible for anything,” she said.

After evacuating unnecessarily five years ago for Hurricane Irma, Suzanne Meirink and her husband, Tom, decided to stay put a mile from the coast in Sarasota County and ride out Hurricane Ian.

Their adult children weren’t happy with the decision. First, Suzanne’s daughter in St. Louis called urging her to leave. Then her son in Denver, who hardly ever calls, did the same. Next came a daughter-in-law’s urgent text and a call from a grandson in Washington.

But the couple didn’t plan to budge from their condo. Instead, they filled buckets of water, did laundry, stuffed their freezer full of food, and waited.

“We are doing fine,” Suzanne Meirink said. “This is the first time I’ve disobeyed my children. You’re allowed to do that once.”

“The flamingos are having a hurricane party in the bathroom; eating, drinking, & dancing.”

That was the tweet from Sunken Gardens, a botanic attraction in St Petersburg, Florida. A photo showed the gardens’ flock of flamingos being sheltered in a restroom during Hurricane Ian.

St. Petersburg was hit with hurricane-force winds and heavy rains during the storm, but seemed as of Wednesday evening to have been largely spared the major effects to the south.

Italy set for referendum on liberalising cannabis use, say advocates

'They told me to bend over. I begged them to stop': Uighur raped