Husband, 81, who suffocated his wife with plastic bag before he hanged himself had posted letter to Royal Mail confessing to murder with ‘Ring 999’ written on envelope, inquest hears

A husband posted a letter to the Royal Mail confessing to killing his wife and stating his plan to take his own life, an inquest heard.

David Arnold, 81, killed his wife Christina, 71, by placing a plastic bag over her head which was held in place by an elastic ligature.

The retired draughtsman then posted a letter to the Royal Mail with ‘Ring 999’ written on the envelope, which contained a letter in which he confessed to murdering his wife and told how he planned to kill himself.

Pembrokeshire and Carmarthenshire Coroner’s Court heard the letter was discovered by a Royal Mail employee at a sorting office in Swansea on the evening of February 16 this year, who alerted police.

Officers went to the couple’s two-bedroom rented cottage in Clynderwen, Pembrokeshire, and found their bodies in the living room. 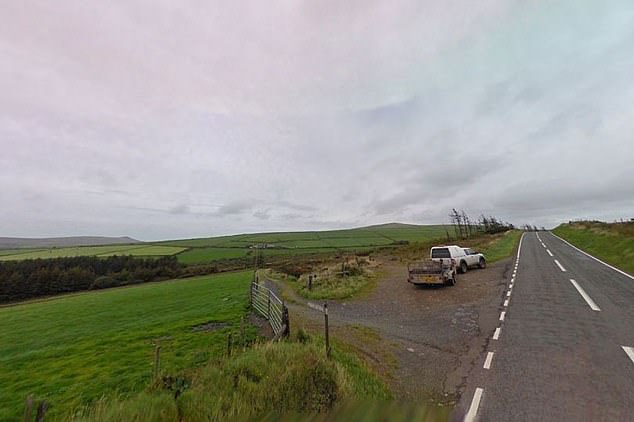 David Arnold, 81, killed his wife Christina, 71, by placing a plastic bag over her head which was held in place by an elastic ligature (file photo of their driveway)

Mrs Arnold, who was known as Tina, was discovered on the sofa with a plastic bag around her head. Her husband was found hanging.

Coroner’s officer Lisa Jenkins told the court: ‘Within the property a further two letters were found. One indicated details of personal affairs, such as the letting agreement and next of kin.

‘A second note indicated that Mr Arnold had killed his wife and was intending to commit suicide.’

The hearing was told police investigations did not find any evidence of third party involvement.

‘The evidence suggests that David Arnold has murdered his wife and then committed suicide,’ Mrs Jenkins added.

The couple married in 1970 and had four children and six grandchildren. Mr Arnold had suffered with anxiety and stress, while his wife had depression.

‘David and Christina’s relationship with their family was quite estranged and they didn’t have regular contact with their children,’ Mrs Jenkins said.

‘David’s brother had not seen him in around 10 years and the last communication they had was by Christmas cards the previous year.

‘There had been no fall outs or ill-feeling, it was just not a close relationship. They knew David and Christina loved their family, their children and grandchildren.’

Post-mortem examinations were carried out by Home Office pathologist Dr Deryk James, who said there were no signs of injury or assault to Mrs Arnold.

‘The only significant finding is a plastic bag held in place around the neck by a ligature,’ he said.

He found Mr Arnold had died from hanging.

Paul Bennett, acting senior coroner for Pembrokeshire and Carmarthenshire, said Mrs Arnold had been unlawfully killed while her husband had taken his own life.

‘For a married couple to have both had their lives ended in the circumstances described is a particularly tragic and distressing situation,’ he said.

‘For whatever reason we will never be entirely clear about, Mr Arnold took steps on that day to end his wife’s life.

‘The manner in which that was undertaken clearly is a distressing one. There can be very few situations where the situation is so stark and tragic.

‘Mrs Arnold died as a consequence of being suffocated by a plastic bag that had been placed around her head and I find that she was unlawfully killed.

‘For Mr Arnold the evidence clearly points to there being active steps taken by him to end his life. I formally record a conclusion of suicide.’

The couple’s family did not attend the hearing at County Hall in Haverfordwest.

Michael Jackson accuser Jordan Chandler can’t have been lying about abuse because he revealed it after taking ‘truth serum’ drug, dad believed