A WOMAN says she developed an eating disorder and all food tastes like “sewage and garbage” after she caught Covid.

Natalia Cano, 20, from Mendham, New Jersey, contracted the coronavirus in January 2021 while she was working in a food store and claims her sense of smell and taste has been completely altered. 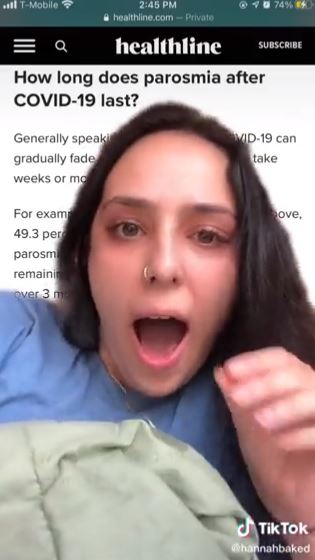 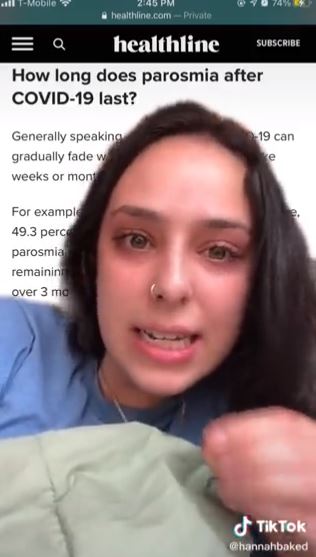 Following her recovery from the virus she noticed that food which previously tasted good now tasted like “garbage and sewage,” “gasoline,” or “mold” – indicating she may have a condition called parosmia.

Cano said that she developed an eating disorder and would be sick any time she tried to eat anything.

She said she is still suffering from the condition more than ten months after recovering from Covid and doesn’t know if she will ever get better.

Cano burst into tears in a TikTok video she posted about her condition, with the footage picking up millions of views in just a few days.

“I don't think anyone understands how much this affects your daily life. It's not just that foods taste wrong, I mean, it is that, but it's garbage dude, it's sewage,' she said in the video.

“It's gasoline. It's ammonia. It's bitter. It's mold. Imagine if all of your favorite foods tasted like your least favorite foods. It is a step further. It is garbage and sewage.

“Imagine the worst smell that you have ever smelled in your life, and it's that but everything. It's everything.”

Cano also reads from an article on the condition in Healthline which said half of the people who suffer from parosmia improved within three months.

“[It can last] anywhere between nine days and six months. I am on month 10,' she said.

According to the website: “Parosmia causes things you encounter every day to seem like they have a strong, disagreeable odor.

“People who have it can detect an odor that’s present – but the scent smells “wrong” to them. For example, the pleasant odor of freshly baked bread might smell overpowering and rotten instead of subtle and sweet.”

Cano added that while she had been to see many doctors and had lots of tests done a solution had not been found.

“It was affecting me so much that I developed gastritis, where every single meal I was throwing up, I couldn't get anything down for a very long time,” she said.

“Now I can, sure, but I have a severe ED because it's not that everything tastes bad, it tastes like sewage.

“It's been 10 months and [one] doctor told me that if it didn't improve within a year, there's a chance that I won't ever get it back. I have two months left, and it's not going away.

'GAGGING AT EVERY MEAL'

“Out of survey responders, 10 percent of people who had Covid reported having this. There is no research, there is no cure. There's just hoping. I'm gagging at every meal.”

The condition is a common trend with many of those who suffer from Long Covid, where people still suffer from symptoms connected to the virus many months after recovering.

Speaking to The Sun, Dr Ben Littlewood-Hillsdon, chief medical officer of symptom assessment tool Doctorlink said one aspect of Covid-19 which is yet to be fully understood is its longevity.

"Firstly, it’s important to know that ‘long-Covid’ is not an official medical term, but a colloquial term being used to describe people whose symptoms go on for longer than the two-week symptom period officially recognised by WHO," Dr Ben said.

"As with the acute stage of the disease, the long-term symptoms are still far from being fully understood."

In a separate video Cano talked about various foods and what they tasted like to her.

She said she tried to eat two protein bars a day because “sometimes it’s the only things she can keep down”.

”'It's not a lot of bites but it's a lot of protein so I force myself to eat it,” she said.

“In general things that are sweet taste less horrible to me, still not fantastic but I'm not actively gagging,” she said.

“Nothing makes sense, it's completely arbitrary. There's literally no rules.”

For her, she said toothpaste tasted bitter and sour and even water tasted bad.

In an interview with Buzzfeed, Cano said: “It was a really common theme that we had developed really intense symptoms of parosmia a month or two months after we had initially gotten Covid.

'I had no idea that [parosmia] was an after-Covid symptom until I got it.”

She told the outlet she would be talking to her doctor about undergoing repetitive transcranial magnetic stimulation (rTMS) in the next few weeks, which is normally a noninvasive therapy used to treat depression but has been shown to  help people with parosmia.

According to Buzzfeed, people who undergo the therapy report recovering around 80 per cent of their taste. 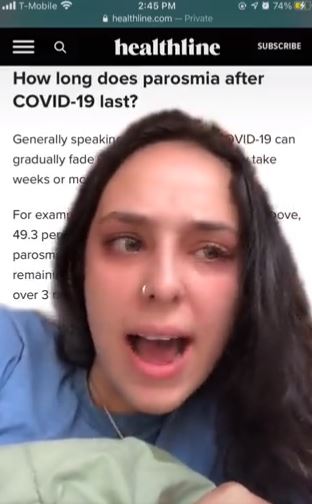 Couple jailed for 30 years for catalogue of child sex offences