Home » World News » ‘I looked for her among the dead’: Indonesian coach feared the worst for daughter

“I was worried. I looked for her among the corpses,” the former Indonesia national team player told The Sydney Morning Herald and The Age on Monday. 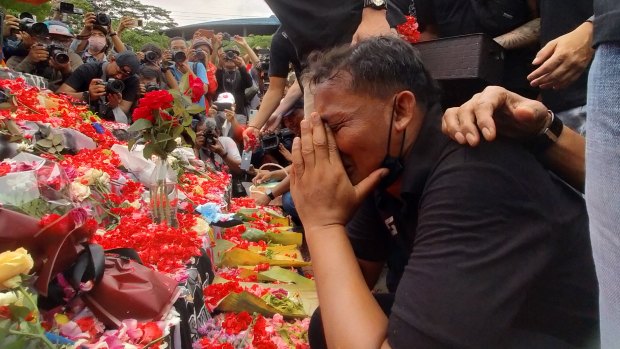 Kuncoro, who like many Indonesians goes by a single name, already knew the pain of losing a child, having had his 22-year-old son die of illness, and couldn’t bear another loss.

Thankfully, as he was to later discover, his daughter had already left Arema’s ill-fated match against East Java rivals Persebaya Surabaya, having been collected before the final whistle by his cousin.

Many others weren’t so lucky, trampled on and suffocating to death in one of the worst stadium disasters in history on Saturday night.

The Indonesian government confirmed on Monday that 125 people had died in the aftermath of Persebaya’s 3-2 Liga 1 win as tear gas fired by police triggered a crowd stampede, panic and violence. 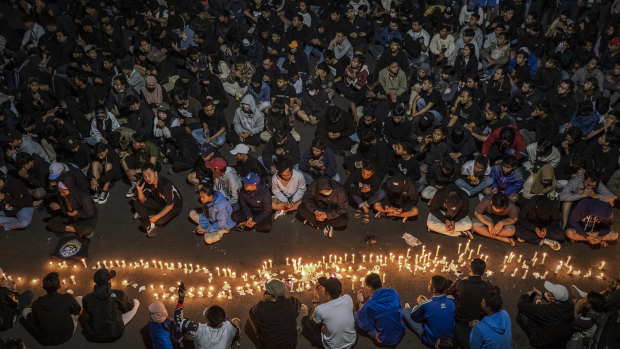 Among them were 17 children – as young as two years old – and two police officers working at the game, while another 21 suffered serious injuries and a further 323 had minor injuries.

Almost all were supporters of the home team, Arema, based in the eastern city of Malang. Some, who were not found with identification on them, were still be identified by relatives and friends, who arrived at a hospital to sift through photographs of the dead.

Families also arrived on motorcycles outside the stadium on Monday, praying with members of the Arema team and staff before a statue of a lion, the club symbol.

Fans had “died in the arms of players”, according to Arema’s Chilean coach, Javier Roca. Thousands attended candlelight vigils for the victims outside the stadium in Malang as well as in Jakarta, Surabaya and Bali. 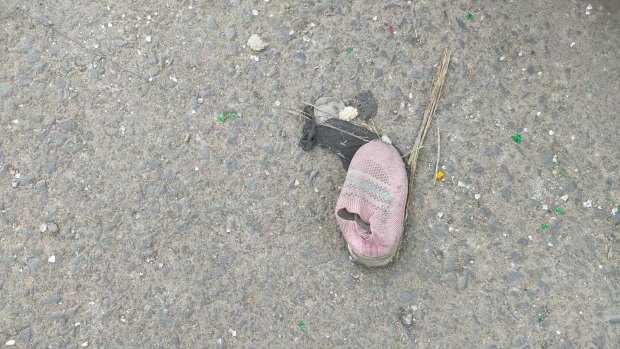 A shoe left outside the stadium, which was engulfed in panic and violence on Saturday night.Credit:Karuni Rompies

Attention has quickly turned to the hunt for answers, as shocking footage continues to emerge. Among the clips is video of trapped fans collapsing as a desperate crowd massed near a closed exit gate, unable to get out.

East Java’s police chief has insisted tear gas was needed to quell “anarchic” scenes after full-time in which he said 3000 Arema fans, who call themselves Aremania, invaded the pitch and were attacking officers and damaging vehicles beside the field.

Witnesses, however, have blamed police for inciting fear and confusion by firing tear gas not only into the air over the pitch but into the grandstands and also in the parking lot outside the stadium.

Footage has also been widely circulated of a soldier running and kicking supporters as other officers struck fans with batons.

“It was like Aremania against the authorities,” said Huda, a spectator at the venue. 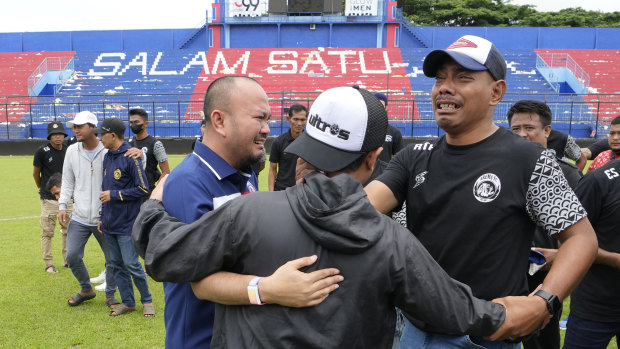 Arema fans and officials embrace inside the stadium on Monday.Credit:AP

“No one was being anarchist – they just wanted to tell their team, and their management, their disappointment.”

The Arema fan, who was seated in the VIP section, said he couldn’t breathe when security forces began shooting tear gas and needed a friend to drag him outside, where they hid in a shop with other terrified fans.

“The mother and her child, that young woman, none of them would go down to the field. What reason would the authority have to shoot tear gas at them? At the parking lot, people were there to seek safety, just lying down trying to breathe. But police shot tear gas there too. I heard maybe three to four explosions. Why?” 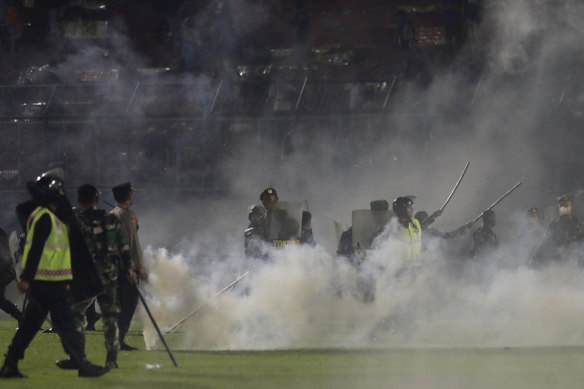 Huda’s friend Galang Yusuf said he was stuck in the stadium for two hours after the match and saw 50 people die as suffocating victims were brought to a small medical room in the VIP area.

“I saw the first victim die because he couldn’t get oxygen,” he said. “It was a boy, a teenager. He was brought barely breathing.

“I don’t think we can blame anyone; it was chaotic. The huge numbers of people there could have started it. But, one thing, FIFA, the world [football governing] body, has clearly stated that tear gas is not allowed to be used for crowd control in a stadium. Yet the officers brought it there. That should have never happened. They brought it in; they must have planned to use it.”

The police response to the pitch invasion was heavy-handed, according to Roca, the Arema coach.

“Nothing like this had ever happened at the stadium, and it fell apart because of the number of people who wanted to escape,” he told Spanish broadcaster Cadena Ser. “I think the police overstepped their mark, even though I wasn’t out there and didn’t experience the outcome. But looking at the images, they could have used other techniques.”

A total of 42,000 tickets had been sold for the game despite the stadium’s 38,000 capacity, according to Indonesian security minister Mahfud MD, who expected an investigation would take two to three weeks.

Rights groups have called on those responsible to be held accountable, and Mahfud said on Monday Indonesia’s national police would “reveal those committing criminal acts” in coming days.

The Indonesian army was also investigating “viral videos [in which] there were army officers who can be seen acting over and against the regulations and outside their authority”, he said.

The government will soon announce details of compensation to be paid to families of victims and will cover medical fees for those injured, including for trauma healing.

That will be little comfort, however, to the friends and relatives of those who left to watch their team on Saturday night and never returned.

Among them were two boys, Ahmad Cahyo, 15, and Muhammad Farel, 14, whose funeral was held in Malang on Sunday.

Endah Wahyuni, their elder sister, told Reuters they loved football, and it was their first time watching Arema at the stadium.

“My family and I didn’t think it would turn out like this,” she said.

‘It was scary’: Witnesses fear for their safety as bike gang drives on wrong side of the road