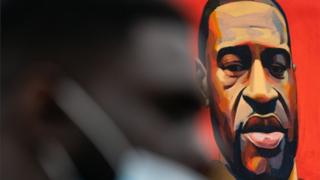 The death of George Floyd at the hands of Minneapolis police officers has sparked a movement to close racial divides worldwide.

But for Zina Fizer, who lives and works in the city where Mr Floyd was killed, the flashpoint for what is now a global movement is acutely personal. Watching Mr Floyd’s death, “I saw my 24-year-old black son under that man’s knee and my heart broke,” Ms Fizer said. “I knew I had to do something.”

Now, Ms Fizer is joined by a wave of African-American women motivated by the death of Mr Floyd to seek public office this year. If she is successful in her bid for state Senate, she will be Minnesota’s first black female state senator.

One month after George Floyd’s death, Ms Fizer and three other candidates tell the BBC why they’re running, and how they see black women leading this next chapter in American history.

I’ve been politically active for years, starting in electoral politics straight out of college. I’ve been asked several times to run for public office myself and in a moment of prayer, I told my God that the next time I was asked, I would say yes.

I think that this is a moment that has been building over time. The moment that we are all in, I think we have seen it before. But this time it was the callousness that was undeniable. And for whatever reasons that this society has made excuses for its behaviour in the past, it could no longer stand on those excuses.

Together, people of goodwill and of good conscience came out in protest in various ways. I came to make a difference in the laws that govern these moments. The structure that was built on systemic racism in this country was built intentionally. And it has to be dismantled intentionally. It has to be rebuilt, taking into account the needs of the people it actually serves.

My major policy aims would be to craft a constitutional amendment that redefines policing in the state of Minnesota. The focus has been on protecting private property over public safety. And secondly, to take full advantage of the exposure Covid-19 has made on the fact that we don’t have healthcare coverage for everyone. This pandemic, I think, lifts that issue to the forefront.

I bring a vision that includes all of us. And I’m hopeful that I’m not alone in that. The vision I can’t get out of my mind is with Gianna Floyd, with her arms outstretched saying ‘my Daddy changed the world’. And I want to say to her ‘yes he did’, because he changed me.

The moment I decided to run was when George Floyd called out to his mom. I saw my 24-year-old black son under that man’s knee and my heart broke. And at that moment I knew I had to do something. Something in me broke. No longer can we just sit here and wait for other people to make changes in our community.

Minnesota has never had a black woman that’s been in the Senate. We have four different black women running for Senate. It would be monumental if all four of us were elected to our seats. I think that that’s what Minnesota needs to do, just to begin the healing process in our communities. Minnesota is the template. I think the rest of the country will follow suit.

We’re in this perfect storm, we’re in the middle of a pandemic. We have protests worldwide, civil unrest and it’s wind underneath my wings right now.

Why is it such an important time for black women? Because we have supported you. We have encouraged you. So it’s like we can be a support, but never the lead. And we haven’t gotten any results. It’s important for us to take the lead at this point because we actually know what we’re doing. We literally and figuratively have birthed the nation. So I think it’s time. People are tired and we’re tired of the status quo. America needs to be ready.

I decided to run for office because of the unfortunate circumstances surrounding George’s Floyd’s murder for all of eight minutes and forty six seconds. I wanted to know that his call to his mother did not go unanswered.

I was asked to consider running for the state Senate and I initially thought ‘that’s pretty far-fetched’ but when I realized that as George was calling for his mother, that I had a responsibility to answer that call. I decided that it was time for me to step up. As a black woman living in America I realized that my voice needed to be heard. Policy and change can only happen when you’re at the table.

I feel so empowered to be among 10 to 20 black women who are taking a stand to be a part of the election process. The status quo can no longer continue. We’ve just got to change things. I feel this is a key moment in time. Black women are rising. And I mean, in order to really get things done in this country, I think women are the ones who can get it done. And black women in particular because we’ve been asked to wait our turn. We’ve been asked to sit this one out.

You know what’s stuck in my mind through all of this? The fact that so many people have come together from all races, all walks of life. And the young people who are are rising up and standing in solidarity with Black Lives Matter and with all of the injustices that have just gone on for far too long. And it feels good because we now know that people see us, you know our struggle, you know our challenges and our heartbreaks.

We have more black women running this year than usual. We put out a call as Black Women Rising to African-American women to say our time is now. We have worked with women for years who’ve been interested in running for office, had planned on running for office, but probably wouldn’t have done it this year, myself included.

But with the pandemic revealing the disparities in healthcare and then we have George Floyd who was killed in our state and, for many of us, in our city. And when George cried out for his mother, I don’t think there’s a mother anywhere who didn’t feel something, but particularly as a black mother. That was the thing that pushed us to this next level. The time is now, we can’t wait.

We bring a different perspective to politics as black women. We have the ability and the tendency to look out for everyone. We’re connected with people who are closest to the pain in ways that other politicians probably are not.

I feel like we have lived a lifetime in this last month. But the one thing that gives me hope is that when I look out at the protesters, I see a multi-ethnic and multi-generational group of people. And particularly to see the young people show up and protest, that gave me hope because I feel like this current generation will have a different set of expectations for what America should look like.

Who is Hope Hicks and what’s her role at the White House? – The Sun