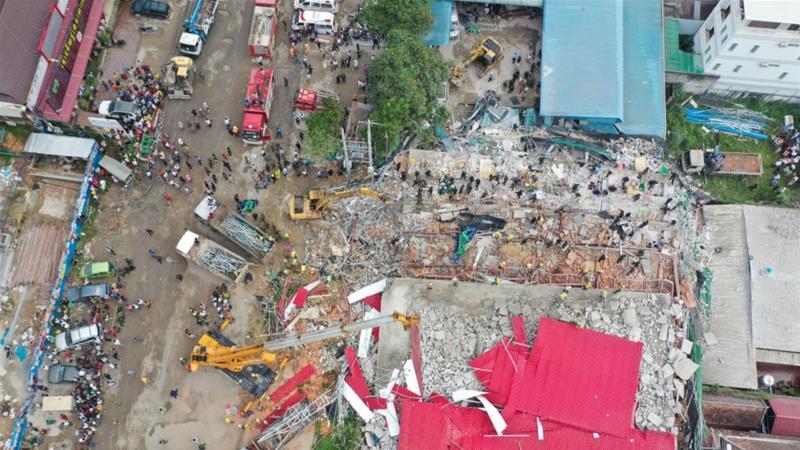 Sihanoukville, Cambodia – In the Cambodian coastal town of Sihanoukville, cranes dot the skyline and construction work continues unabated more than a week after 28 workers were killed in a building collapse, blamed on lax regulation and corruption.

The workers were sleeping inside the building when it crumbled last month. Although the seven-storey structure was 80 percent complete, the owner had not been given approval to start construction.

“This incident has shown the deep rooted problems in Cambodia: corruption, lack of oversight and basic inspections of business, and an overall lack of accountability,” said Phil Robertson, deputy director of Human Rights Watch’s Asia division.

“When this comes to the construction sector, what it means is failures to inspect building sites, compounded by weak labour standards and retaliation against workers who stand up for their rights to not be injured or killed on the job.”

The building was Chinese-owned and local authorities say they had twice ordered the company to stop construction.

Chinese development, encouraged by Prime Minister Hun Sen, has transformed the once quiet seaside resort of Sihanoukville in recent years. Today, amid a city-scape of half-finished buildings, towering cranes loom over streets to a cacophony of near constant jack-hammering.

Workers are often on site without hard-hats or any other type of protection, and many sleep in makeshift shelters inside the partly-finished buildings or elsewhere on the construction site.

Mostly orientated around casinos and resorts, the influx of Chinese money has driven up property prices – leading to forced evictions and violent land disputes – and providing a fertile environment for crime and corruption.

Even members of the ruling party have criticised the policy in a rare show of internal dissent against Hun Sen’s authoritarian regime.

The Chinese nationals in charge of the project – owner Chen Kun and construction supervisor Deng Xing Gui – have been charged with involuntary manslaughter. Three other Chinese, one Vietnamese, and a Cambodian have also been charged as accomplices.

Locals were not surprised by the accident, saying that unsafe building practices are the norm in Sihanoukville.

“I’ve seen many other construction projects owned by Chinese companies that are the same as this one,” said Sihanoukville resident Nop Kim Heng. “It’s very dangerous and authorities should not allow them to build without checking the quality properly. This is an example, but there are about 30 other sites they should monitor.”

Provincial government spokesman Kheang Phearum told Al Jazeera he was not sure how many construction projects were operating without licences.

He said the people had the right to criticise public officials, but denied there was widespread corruption.

“It’s not true under provincial policy,” he said. “We do not take the benefit and let foreigners do anything they want.” He acknowledged that it could be possible that individual inspectors and officials could take bribes.

Cambodia has a reputation as one of the most corrupt countries in the world. In 2018 it ranked 161 out of 180 countries in Transparency International’s corruption perceptions index.

According to Preap Kol, director of Transparency International in Cambodia, Sihanoukville has become emblematic of the risks stemming from Cambodia’s “special relationship” with China.

“For Sihanoukville, things are out of control,” he said. “Hundreds of buildings have been constructed or are under construction (and) many of them were built without license or quality control. Bribes facilitate this.”

In 2016, Enterprise Surveys – a partner of the World Bank – found that 87 percent of the 373 firms questioned paid a bribe at some point in the process of obtaining a construction permit. 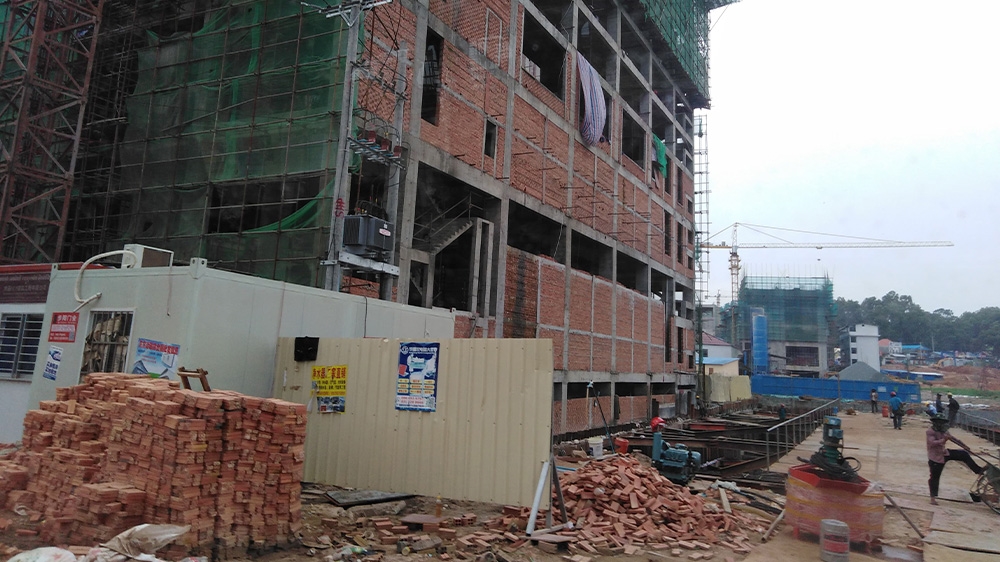 Prime Minister Hun Sen rushed to the scene of the collapse the evening after the July 22 disaster, wearing full military regalia and warning people not to blame China for the fatal accident.

“Do not accuse this nation or that nation… What matters is that we gather all investors into Cambodia, but we must comply with Cambodian laws,” he said.

But, those laws usually go unenforced, according to Robertson.

“Cambodia already has a number of laws that are supposed to protect the health and safety of workers, including construction workers, and regulate building sites through labour inspections but the reality is these laws are simply not enforced,” he said via email.

“The law enforcement in Sihanoukville is quite selective and high corruption is found in the governance system,” he said, adding that the situation also made it difficult for workers to organise and demand better safety standards.

The lack of oversight has also had consequences for the environment. Mother Nature Cambodia, a local NGO, released a video last week showing five resorts and casinos built far closer to the coastline than legally permitted.

The European Union has begun the process of revoking its preferential trade agreement with Cambodia – tantamount to imposing economic sanctions. Hun Sen has said China will fill any gaps left behind by retreating western donors.

Provincial governor Yun Min stepped down following the building collapse, while Nhim Vanda, the vice-president of the National Committee for Disaster Management, was fired.

Both were later given other government jobs – Min was appointed secretary of state in the Ministry of Defence and Vanda was made a government adviser.

Few have confidence that a new committee set up by the Minister of Land Management to inspect construction sites in Sihanoukville will lead to tangible reform.

Changes would in any case provide little comfort to people like Gnor Sreyny, whose younger brother died in the collapse.

“My younger brother was 18,” Sreyny told Al Jazeera between sobs. “He was engaged and was going to get married in six months.

“He just came to work here a month ago in order to pay for the wedding, but now he’s dead and I can’t accept what happened. We just spoke with each other last night, and now he isn’t here anymore.”

Concertgoers told to evacuate from arena after one song following ’emergency’