AL ASAD AIR BASE, Iraq (Reuters) – President Donald Trump made a surprise Christmas visit to U.S. troops in Iraq on Wednesday, his first trip to a conflict zone nearly two years into his presidency and days after announcing a pullout of American troops from neighboring Syria.

Air Force One touched down at the Al Asad Air Base west of Baghdad after an overnight flight from Washington with first lady Melania Trump, a small group of aides and Secret Service agents, and a pool of reporters. They stayed for a little more than three hours.

Trump has drawn fire from some in the U.S. military for not having visited U.S. troops in conflict zones since taking office in January 2017, particularly after he canceled a trip to a World War One cemetery in France last month due to rain.

While there has been no full-scale violence in Iraq since Islamic State suffered a series of defeats last year, some 5,200 U.S. troops train and advise Iraqi forces still waging a campaign against the militant group.

On his way home from Iraq, Trump will stop to visit troops at Ramstein Air Base in Germany.

Trump was looking for some positive headlines after days of turmoil over his decisions to withdraw all U.S. troops from Syria, pull out half of the 14,000-strong contingent in Afghanistan, and push out Defense Secretary James Mattis two months earlier than planned for criticizing his policies.

Many Republican and Democratic lawmakers have heaped scorn on Trump for his sudden order last week to withdraw from Syria.

On his stop in Iraq, he defended his decision to pull out the 2,000 troops from Syria, which he has said was made possible by the defeat of Islamic State militants.

“We want peace and the best way to have peace is through strength,” Trump told troops wearing camouflage fatigues in a hangar as he concluded his visit. He said some troops “can now return home to their families.”

“Our presence in Syria was not open ended and it was never intended to be permanent,” he added.

Trump’s critics have said that the fight is far from over and the withdrawal leaves allies in the lurch.

One of those critics was Mattis, who said in a candid resignation letter last week that his views did not align with the president’s, particularly in regard to the treatment of U.S. allies. Mattis had planned to leave at the end of February but Trump forced him to go on Jan. 1 after his resignation letter.

Trump has also faced negative headlines for wanting to pull troops from Afghanistan where they have been since 2001. Trump has questioned how long troops there should have to remain in what has become America’s longest war. 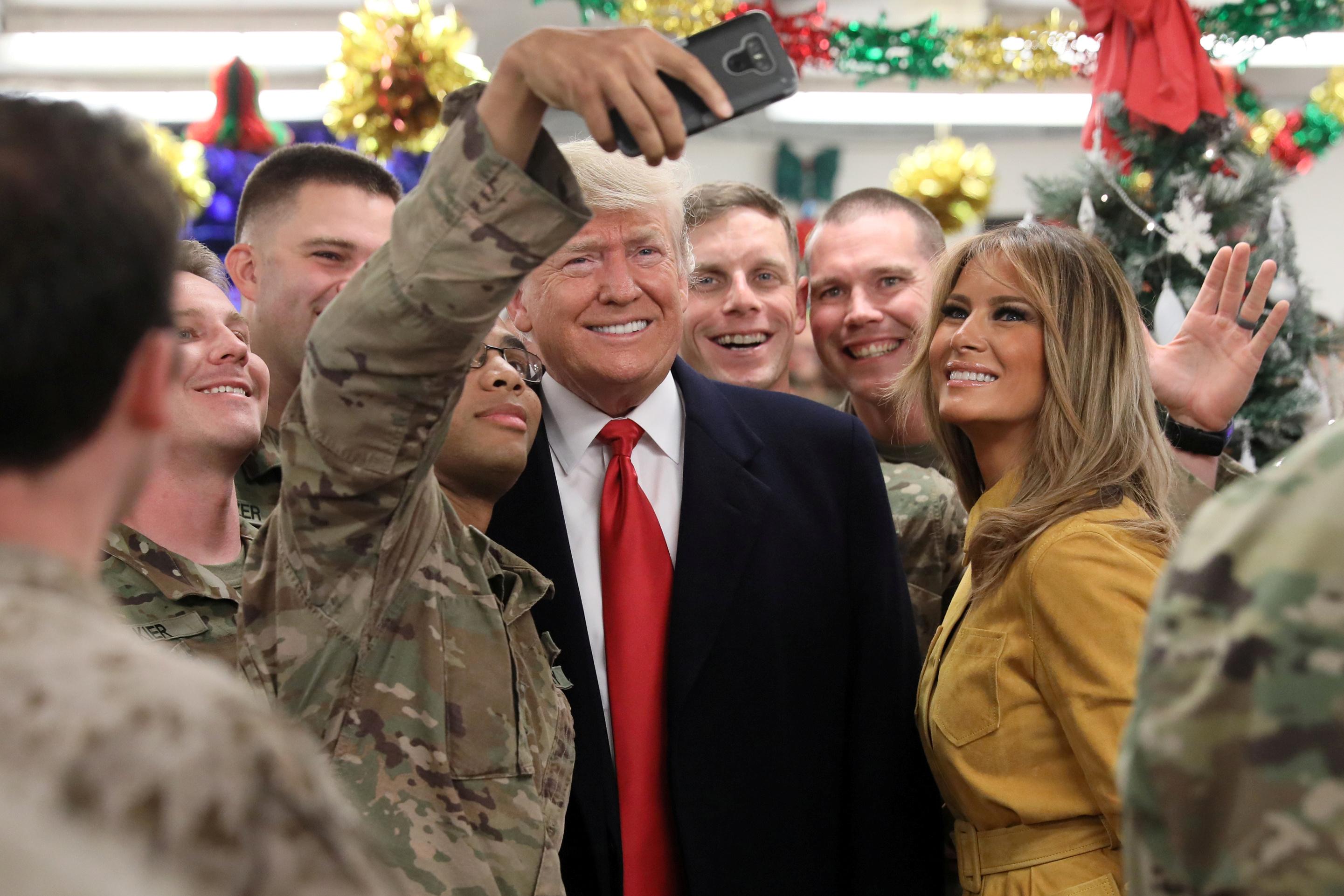 Trump’s unannounced visit to Iraq followed in the footsteps of two of his predecessors, Republican George W. Bush and Democrat Barack Obama, who both made surprise trips to see troops. For security reasons, the visits are usually kept secret until after the president arrives.

Trump said his main security concern was for the first lady and related how Air Force One took special precautions when landing in Iraq. “You would have see what we had to go through in the darkened plane with all windows closed with no light anywhere,” he said.

While in Iraq, Trump spoke to military commanders and the U.S. ambassador and, according to White House spokeswoman Sarah Sanders, they “came up with a powerful plan that will allow us to continue our path to total victory” over Islamic State.

Unlike Syria, Trump said he had no plans to withdraw from Iraq.

Trump has had an uneven relationship with America’s military. He did not have to serve during the Vietnam War after being diagnosed with bone spurs in his heels.

As president-elect, Trump was drawn to the brawn of the armed forces and stacked his first Cabinet with generals, many of whom have since left his administration.

Trump has also wanted to end protracted U.S. involvement in overseas conflicts, and to force allies to pay more for the costs that he says fall disproportionately on American taxpayers, a point he made again on Wednesday.

Trump spoke to troops gathered in a dining hall festooned with holiday decorations and teased soldiers about their favorite football teams. 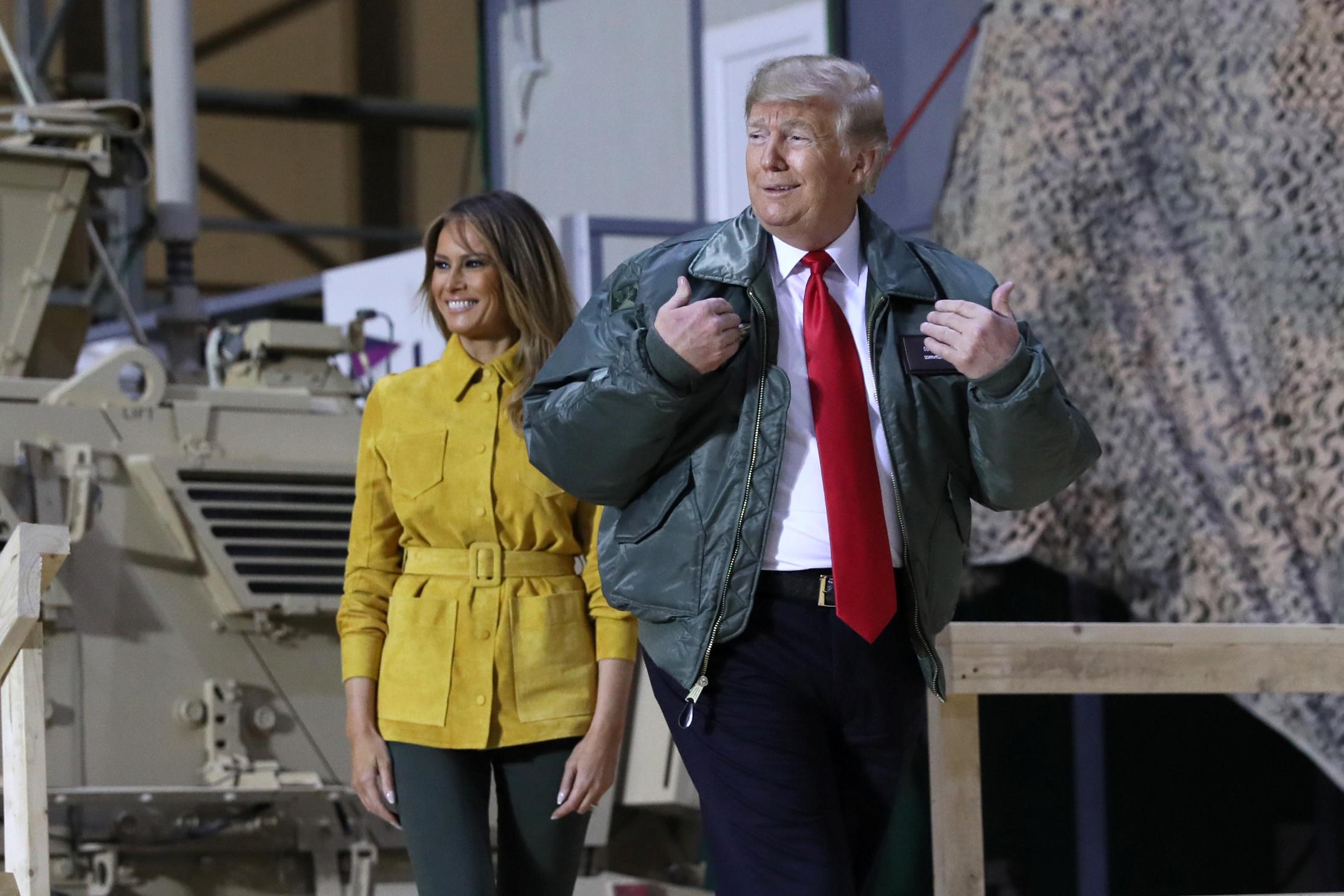 To reporters, he lamented the wear and tear of overseas conflicts.

“It’s time to get our young people out,” Trump said. “And I’ve been signing plenty of letters and I don’t like sending those letters home to parents saying that your young man or your young woman has been killed.”

“I don’t like doing it. We’ve been doing it long enough.”