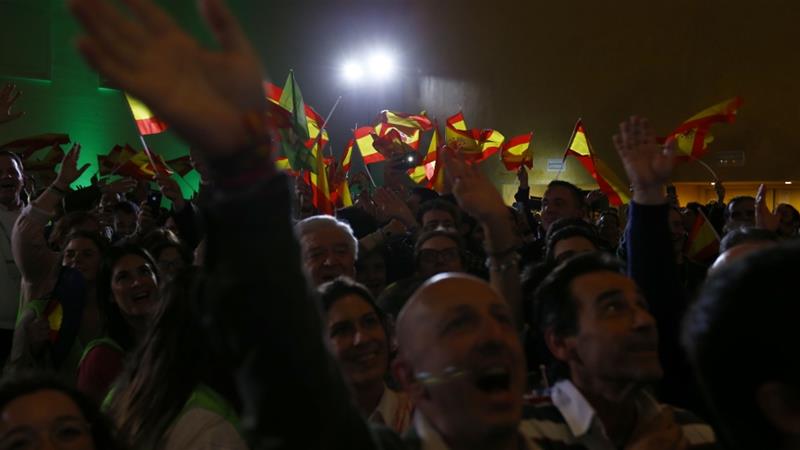 A far-right party in Spain has won seats in a regional parliament for the first time since the country’s return to democracy following the death of longtime dictator Francisco Franco in 1975.

The small Vox party, which opposes undocumented immigration and Catalan independence, took 12 seats in Sunday’s polls in the southern Andalusia region, according to official results.

It was the first time the nationalist surge that has swept much of Europe had reached Spain, long seen as immune because many still remember Franco’s military dictatorship.

With the Socialists weakened in a region they governed since Franco’s death and which they could now lose to a right-wing coalition, the result is likely to send shockwaves through the Spanish political landscape.

A series of local, municipal and European elections will follow at the end of May, with politics in the eurozone’s fourth-largest economy – long dominated by the Socialists and the conservative People’s Party (PP) – upended by start-up parties.

The Andalusia vote was the first electoral test for Socialist Prime Minister Pedro Sanchez, who came to power without an election in June after parliament ousted the conservatives over a corruption scandal.

The next national election is due in 2020 but speculation has been rife for months that Sanchez, who controls fewer than a quarter of seats in the Madrid parliament, could call a snap vote.

However, senior Socialists said before the Andalusia election that they did not expect it to trigger a general election, and there would seem to be little incentive for Sanchez to do so now after the disappointing results for his party in Andalusia.

Much will depend now on whether the Socialists, who have not yet managed to get the country’s budget approved in parliament, gather enough support from smaller parties, including Catalan nationalists

“We are the ones who will bring about change, progress and the reconquest,” Francisco Serrano, Vox’s candidate in Andalusia told a loud crowd gathered in Seville, many of whom waved Spanish flags and chanted “Spain! Spain!”

There are a total of 109 seats in Andalusia’s regional assembly and the vote was very divided, in a new sign of how the large parties are finding it harder and harder to secure majorities in Spain.

With 99.9 percent of ballots counted, the Socialists received most votes.

But with only 33 seats for them and 17 for the far-left Podemos and its allies, that is well down from previous elections and they would struggle to secure a majority.

The conservative People’s Party (PP), which came second, said they would seek leadership of Spain’s most populous region.

The PP’s national leader Pablo Casado said his party planned to hold talks in Andalusia with all the parties to the right of the Socialists. That would include Vox and the centre-right Ciudadanos. Together, they have a majority of seats.

All three hailed the result of the Andalusia election and said they wanted to boot the Socialists out of the region.

The Socialists urged mainstream parties to block the far-right and said they saw Vox’s 12 seats as “very serious”.

“This phenomenon we have seen in the rest of Europe and the world has now reached Spain and is entering the Andalusia parliament,” Susana Diaz, the Socialist candidate in the region, told supporters.

Andalusia, which has one of Europe’s highest unemployment rates, is the entry point for thousands of Africans who have been reaching Spain by sea in greater numbers as traffic on the other main route across the Mediterranean to Italy has been curbed.

French far-right leader Marine Le Pen congratulated Vox, writing on Twitter: “Strong and warm congratulations to my friends from @Vox, who tonight in Spain scored a very meaningful result for such a young and dynamic movement.”