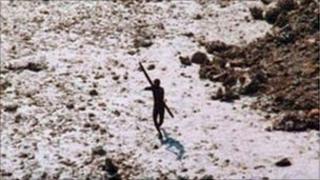 Indian coastguards have arrested more than 100 Burmese fishermen in a month for endangering aboriginal tribespeople in India’s Andamans archipelago.

Some of the fishermen were caught off the North Sentinel island, where the Sentinelese tribe lives, officials say.

Numbering fewer than 100 in all, the Sentinelese have always attacked those approaching the islands.

The Jarawas have had contact with outsiders only since 1998. Only 320 Jarawas are living today.

“We have intensified our coastal patrols since late August,” a senior coastguard official, who was unwilling to be identified, told the BBC.

“Our particular concern is to protect the primitive tribes whose numbers may further dwindle if they come into contact with outsiders. We want them to left alone.”

Many global organisations like the London-based Survival International have been campaigning to save the tribespeople, who may have lived in the Andamans for more than 60,000 years.

Poachers catch turtles and dive for lucrative sea cucumbers for the Chinese market, and also hunt in the Jarawa’s forest, Survival says.

The poachers come from the sea – or through a controversial road cutting through the Jarawa reserve.

Both the Jarawa and the Sentinelese are hunter-gatherers, and theft of the fish and animals in their territory endangers their food supply.

The Sentinelese are particularly at risk: their complete isolation means they are likely to have no immunity to diseases such as flu and measles.

Brits set for more rain and flooding before ‘soggy’ weekend