Earth removers and diggers are continuously removing debris and slush at the Rishiganga power project.

There is almost 30ft of it that they need to clear – but with caution as there may be bodies buried underneath.

Families and relatives of those who were trapped inside are losing patience and are angry. They argue with the police and officials about the slow pace and why only three machines are being used when the area is so vast.

Bina Devi tells Sky News: “My younger brother is trapped inside for days but these people are not doing anything. They are not telling us what’s the progress, since yesterday they have not cleared anything.”

Her grandmother demands that “all work must stop… they need to find my grandson now”.

Nafiz has come from Saharanpur to look for five members of his extended family.

“They are stuck in the basement of the project, we are giving them this information but they are looking elsewhere,” he said.

“Why since last night no body has been discovered yet?”

Police deployed at the site are desperately try to calm things down, but their assurances that work has been going on relentlessly does not convince the relatives. 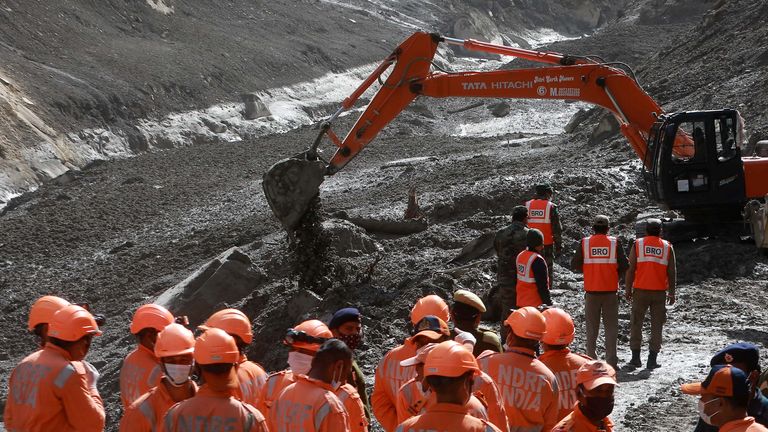 Mukesh Kumar has made a 400-mile journey from Punjab to look for his brother-in-law, a senior engineer at the site.

“I had a phone signal from his phone this morning and I have told the authorities about it but still no one has done anything,” he says.

For each person time is precious, and each passing moment without a result is agonising. 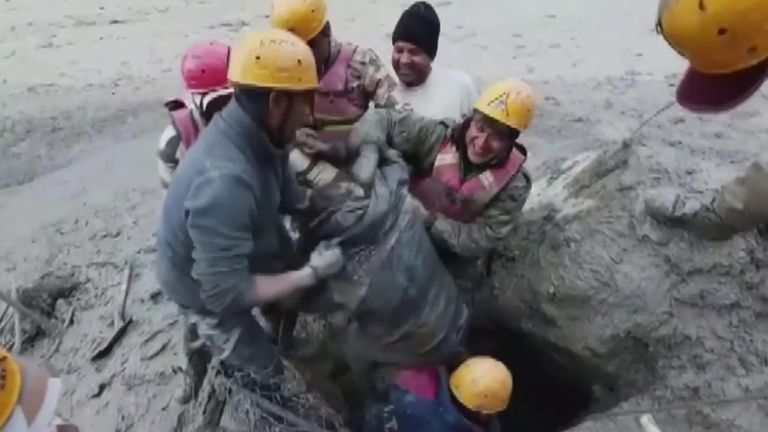 The water, debris and slush that thundered down from Nanda Devi caused havoc on Sunday morning.

The force was such that it broke two dams on its way, inundating the river and destroying everything in its path.

Dozens of bodies have been recovered so far, but the fear is that more than a hundred people are still missing.

The debris and slush has left a mark almost 30ft high on the sides of the mountain as it moved downstream along the river.

At the bigger Tapovan hydro project rescuers are busing trying to clear a mile-long tunnel where 35 people are believed to be trapped. 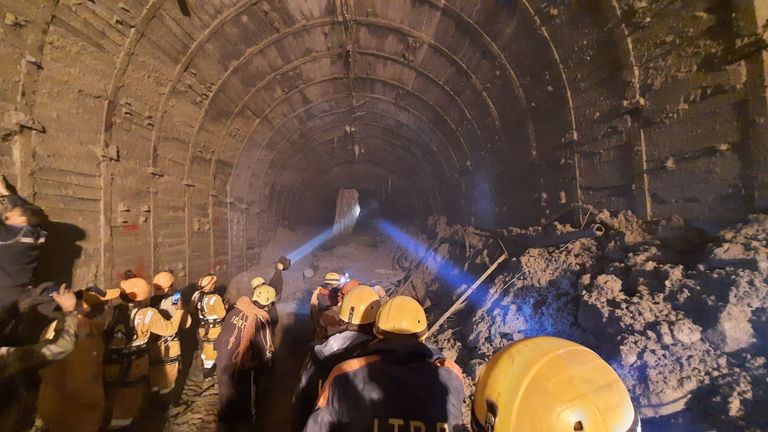 Commandant Manjunath, of the Indo-Tibetan Border Police spearheading the rescue operations, told Sky News: “They have cleared up to 110m til morning.

“Due to restrictions inside the tunnel heavy equipment can only reach 100m, the rest is being done by other smaller equipment and manpower.”

Deepak Chauhan, whose brother is trapped, inside says “from the beginning the equipment used is inadequate and the process is too slow”. While we were filming, Kamal Chauhan asked us to zoom into a container that was two thirds submerged in the riverbed.

A project manager for the Rishiganga power station, he is looking for signs of 40 of his men that have been missing since Sunday.

He told Sky News: “I heard a very loud sound and looked up to the mountains and all I could see was smoke and dust.

“Large boulders were bouncing off the mountains.

“Within 10 seconds it descended upon us. I tried alerting my men and we ran. The debris even touched my shoes, I don’t know how I survived. Death just touched me on its way ahead.”

Search launched for missing teen, 19, who disappeared from Hull on Christmas Day with ‘very dangerous man'

Cardi B interviews Joe Biden and has ‘whole list’ of demands