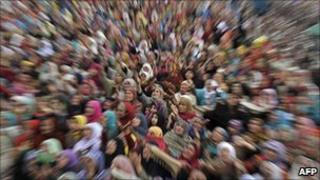 India’s population has grown by 181 million people over the past decade to 1.21bn, according to the 2011 census.

India is on course to overtake China as the world’s most populous nation by 2030, but its growth rate is falling, figures show. China has 1.3bn people.

The census also reveals a continuing preference for boys – India’s sex ratio is at its worst since independence.

Female foeticide remains common in India, although sex-selective abortion based on ultrasound scans is illegal. Sons are still seen by many as wage-earners for the future.

Statistics show fewer girls than boys are being born or surviving. The gender imbalance has widened every decade since independence in 1947.

“This is a matter of grave concern,” Census Commissioner C Chandramauli told a press conference in the capital, Delhi.

Government officials said they would review all their policies towards this issue, which they admitted were failing.

Indians now make up 17% of the world’s population. Uttar Pradesh remains its most populous state, with 199 million people.

The statistics show India’s massive population growing at a significant rate – 181 million is roughly equivalent to the entire population of Brazil.

But the rate of that growth is slower than at any time since 1947. The 2011 census charts a population increase of 17.6%, compared with one of 21.5% over the previous decade.

The BBC’s Mark Dummett in Delhi says the slowing growth rate suggests that efforts to promote birth control and female education are working.

In the field of education there was good news, with the census showing the literacy rate going up to 74% from about 65% in the last count.

Some 2.7 million officials visited households in about 7,000 towns and 600,000 villages, classifying the population according to gender, religion, education and occupation.

Census officials also have to contend with high levels of illiteracy and millions of homeless people – as well as insurgencies by Maoists and other rebels which have left large parts of the country unsafe.